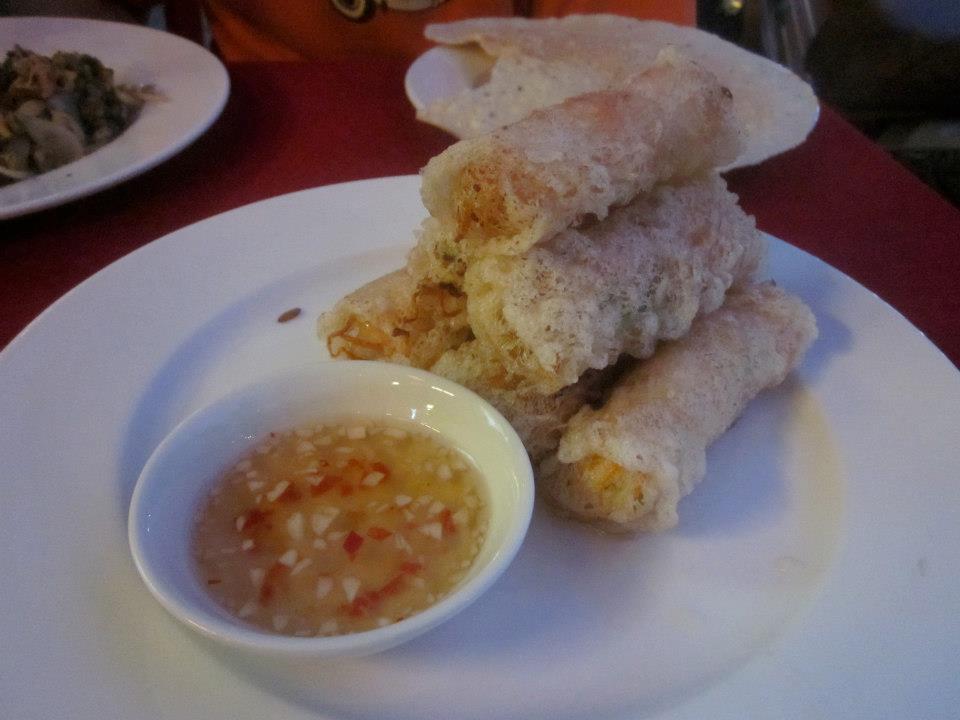 This is the first of our culinary pit-stops in Asia, as we bring you a series on south-east Asian cuisine. Food has played an important role in structuring our trip, and by enrolling in a cookery course in each country we have visited, we aim to approach these cultures through our palates.

Vietnam’s flavours are very distinct from those of its neighboring countries, and stand out for being delicate, crunchy and heavy-handed with the herbs. Mealtimes are very much a communal affair in Vietnam. Whilst this can be said of nearly all cultures (dinner is after all something to share with family and friends) Vietnamese dishes are themselves designed with sharing in mind. Rather than each person ordering a dish to themselves (a very European phenomenon), a typical Vietnamese meal consists of five or more dishes, served simultaneously and dipped into by all.

Below we will introduce some of the defining dishes, but also flag up some hidden gems that we were fortunate enough to sample. Some of these dishes are national staples, but others are regional specialties of central Vietnam where we spent the majority of our trip:

Phở: Vietnam’s ‘signature’ dish is a rice-noodle soup, served with either beef or chicken. The broth is heavy on the onion and pepper. The quality can really vary, since many establishments (especially in the centre of Vietnam) use instant noodles and soup-mix, rather than making their own delicious, slow-cooked broth. Eating phở is very much a D.I.Y. experience, since each bowl is often brought out with a small platter of garnishes alongside. These usually include bean sprouts, mint, Thai basil, lime for squeezing, and, of course, raw chilli. We soon discovered that the inexperienced phở-muncher can easily go over the top on spice: at first the amount added will seem fine, but as the chillies sit longer and longer in the broth, they can build to a rather overpowering climax. You have been warned!

Bánh xèo: Our first encounter with this delicious delicacy was when someone sitting next to us as a restaurant ordered it. He caught us looking in bewilderment at his plate and said: “Have you guys tried this yet? It’s a pancake in a pancake!” Obviously we needed no more information than this to be won over and ordered some ourselves. A big, crunchy, savoury pancake came out on a plate folded in half bursting with beansprouts, shrimp and pork, and another plate with salad leaves and herbs, sweet chilli sauce and rice paper wrappers was placed beside it. The lady serving us clearly sensed we were bánh xèo virgins and constructed our first one for us. She placed a pancake wrapper on her hand, scattered some leaves in the centre and effortlessly pulled part of the crispy pancake off with chopsticks and layered it on top, folding it into a neat little parcel. She then dipped it in the sauce and the masterpiece was complete. A bite contains some of the most contrasting yet complimentary flavours and textures – the sweetness from the sauce and the bitterness from the herbs, the greasy yet incredibly light pancake and the crunchiness of the ingredients encapsulated by a chewy layer of rice paper. A taste explosion, and truly one of our favourites.

Hến trộn: This is a real hidden gem, especially for those used to paying extortionate amounts for seafood. Enticed by a promising photo, we were still pleasantly surprised when this gigantic heaped pile of clams came out of the kitchen. The hundreds of tiny clams are mixed with mint, peanuts, onion and fish sauce, making it go down a treat…even at the speed we wolfed it down it seemed like a never-ending pile. To top it all off, the dish comes accompanied by a large rice cracker (similar to a papadum) which you crack and scoop with. We sampled the hến trộn at the appetizingly titled ‘Dung Restaurant’ in Hoi An, whose owner was unbelievably smiley and excited that we were enjoying her food…and was perfectly willing to turn off all the lights in her restaurant so that we could get a good picture with her! We must also note that she served us the best spring roll we have ever had in our lives, the ‘Hoi An’ spring roll, which instead of your standard rice-paper wrap, comes housed in a bird’s nest of deep-fried crispy noodles…

Wontons: Contrary to the ‘parcel-like’ fried wontons we were used to having, in Vietnam we were introduced to an ‘open-faced’ wonton. This creation starts with a triangle shaped raw wonton which is then submerged in bubbling oil for a few seconds until it gets crunchy and golden. Hidden in one corner of these special wontons (only found in Hoi An!) is a circle of ground up pork and shrimp meat, leading to a delicious chewy and meaty surprise when you bite into that bit! Atop this crispy sheet is a mixture of green beans, tomatoes and onions all swimming in a tomatoey sauce, finished with a single prawn and some crispy onions. Sounds simple, and the dish itself really is – but the flavour is anything but! The generous topping makes the wonton the perfect balance between crispy and soggy, and the three portions were always gobbled up in no time leaving us wondering whether it would be too greedy to order more. (The answer was no).

Vietnam brought us some entirely new taste profiles, with many of the dishes managing to be deliciously crispy and healthy at the same time. Next time we shall be bringing you recommendations from Cambodian cuisine, where things are bound to get richer and saucier…