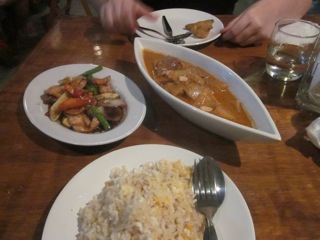 Thai food it seems to be becoming a favourite among the English population – a bit more exotic than the good old Chinese, but still within the boundary of safety and comfort. There were no HUGE surprises to us while we ate in Thailand, as we were quite well versed in the traditional curries and noodle dishes before we left. We did stumble across some hidden gems and got to know the traditional styles rather than the English interpretations… We can say without a doubt that our favourite restaurant was in Thailand, and while the dishes may not have been entirely new to us, they were done incredibly well and provided some exceptionally hard to beat meals.

Thai Curry: A Thai curry dish is made from curry paste, coconut milk, meat/seafood, vegetables and fresh herbs rather than dried spices. They’re not as thick as Indian curries, but not too watery that you can’t mop up the sauce with a mountain of rice. The chillies and spices added to the traditional curry paste are what give the curries their distinguished colours and flavours…

Yellow – Tumeric and sometimes ‘curry powder’ give this sweet, plain curry its vibrancy

Panang – A red curry with ground peanuts in the paste, resulting in a sweeter and less spicy curry 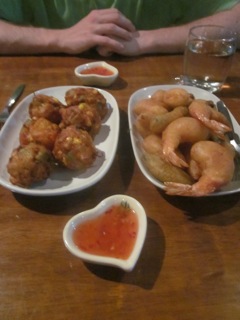 Pad Thai: Another staple Thai dish that everyone is familiar with composed of rice noodles stir fried with a choice of protein (beef, chicken, prawn) along with beansprouts, egg, fish sauce, tamarind paste and peanuts. This tasty stir fry is served in restaurants and on street carts so is readily available wherever you are! Often served with a wedge of lime, chopped red chillies and extra peanuts so you can garnish your noodles to your taste.

Khao Soi: A crispy delicacy of northern Thailand, Khao Soi stands out since it has noodles of two different consistencies. The dish is essentially boiled rice noodles in a coconut milk curry (somewhere between a yellow and a massaman) topped with a further batch of crispy deep-fried noodles. Chunks of shallot, lime and chilli are then scattered liberally over the top to provide some punch. A rewarding eating tactic is to crunch a few of the deep-fried noodles on their own, but then to stir the remainder deeper into the curry sauce creating a soggy-crispy combo.

No Name: This head-scratchingly named dish (we thought it must have been a mistranslation at first) is a classic Thai starter and has quite a lot in common with an onion bhaji. Apparently the name comes from more thrifty times, when vegetable scraps were clumped together, battered and deep-fried; no one expected them to ever become a dish in their own right and hence, they were never given a name! The ones we first tried however were far from frugal, packed full of onion, corn, carrots and cauliflower, and had us returning to the restaurant nearly every night of the week! 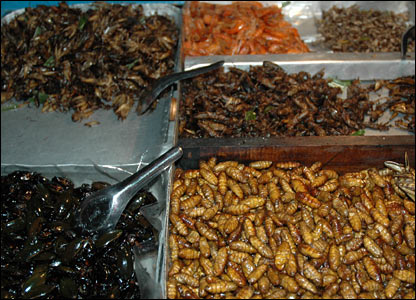 Insects: This was a lamentable gap in our taste adventures. Street food vendors offer all kinds of grilled locusts, cockroaches, spiders, flies – you name it! However, on the one day that I geared myself up to sample a crispy carapace, I was floored by the worst food poisoning I have had in my life. Possibly my body was revolting against what I had planned for it, but in hindsight, I probably should have shovelled a spider down anyway. If anyone has sampled any delicious insects please comment and let us know! I suppose you could always try it yourself at home, but, at least in the UK, I have a feeling you’d been greeted by some rather strange looks trying to corner a cockroach for your tea.

And that brings our South-East Asian adventures to a close… With a cooking course completed in each country, we feel that we’ve managed to gain at least some insight into the cuisines on offer here. We have only scratched the surface however, since most of the recipes taught are the representative ‘blockbuster’ dishes of the country; so who knows what delicious delicacies lie hidden from the tourist’s eye?

From South-East Asia, we headed to Shanghai; a city that is considered to have relatively flavourless cuisine by the rest of China. As you shall see however, we found plenty to rave about…although not necessarily the duck heads, marinated fat and chicken feet.