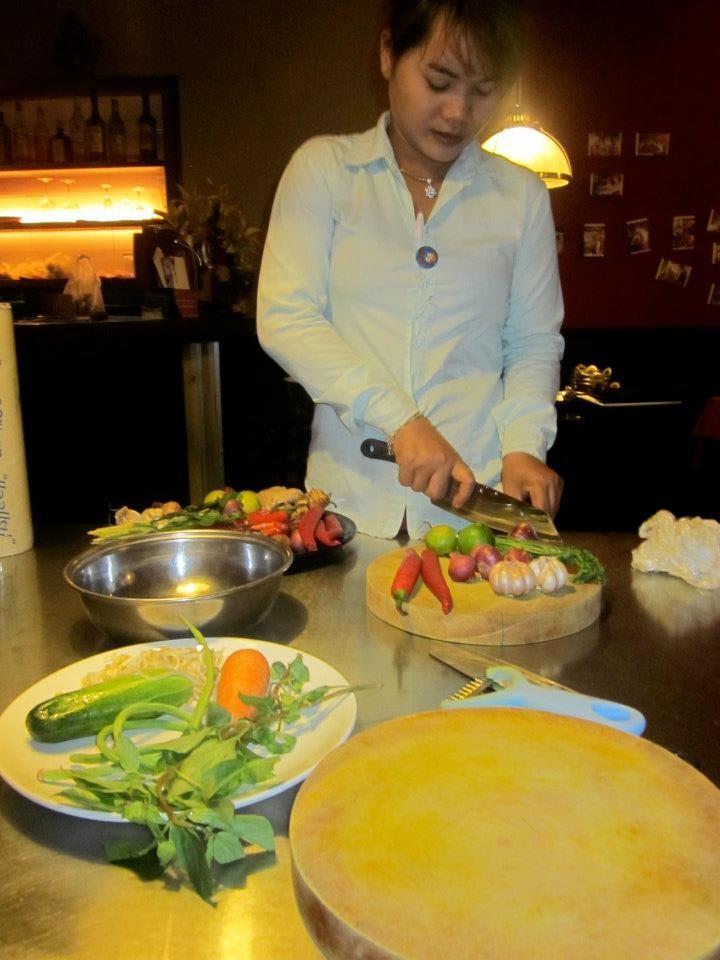 We now head on over to Cambodia; a cuisine that is not so well signposted on the culinary map. With this being the case, we had few preconceptions about what we were going to end up munching down on. There is a great spill-over of regional influences, and we would describe the cuisine as a welcome mixture of its neighbours’ styles: the Vietnamese freshness and use of crunchy vegetables is there, a Laotian excessiveness with herbs, and curry sauces which are reminiscent of the main Thai delicacies. In saying this, we don’t wish to play down the distinctiveness of Cambodian cuisine; for there are plenty of peculiarities that the Khmer people bring to the table.

Firstly, this is food that likes to get dressed up. The Khmer use all kinds of garnishes, flowers and carved fruits to jazz up the presentation, and most dishes come served on a bed of lettuce or wrapped up in a banana leaf. Dexterity is an essential skill (one which I lack) as I soon found myself struggling to fold, cut and staple leaves together to serve as make-shift bowls. This is before we were put through our paces trying to keep spring rolls together as well! 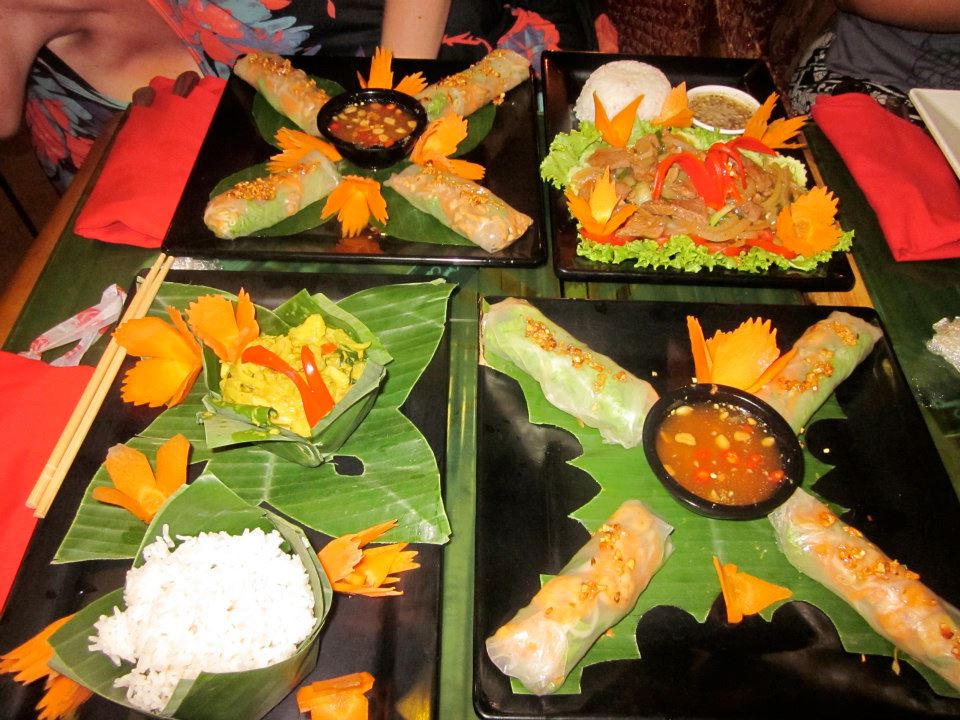 All of this ornamentation serves to draw attention the main protein (in our experience, usually fish or beef) which is presented on the plate with little else but the garnish and a sauce to back it up. Rice and noodles are, of course, essentials on the table, but are often added in afterwards… why interfere with the miraculous-looking main course if you can help it? This focus on protein is also seen in the many ‘Khmer BBQ’s’ that line the streets, offering all the kinds of meat on a stick you could possibly dream of…including turtles.

But now, let us move on to some of the central dishes of Khmer cuisine:

Amok: Certainly the most popular dish amongst westerners and tourists, Amok certainly lives up to its reputation. Surprisingly delicate, it consists of strips of fish steamed with curry inside a banana leaf ‘cup’. The sauce itself has much in common with Thai curries: it’s thick, fragrant and has a heavy coconut cream base. What is different however, is that the dish isn’t overloaded with spice, instead a delicate balance of herbs such as galangal, lemongrass and kaffir lime leaf is achieved. Combine this with fish as the main protein and eating amok becomes a very subtle yet mouth-watering experience. The kind where you take really teensy spoonfuls and wait ages in between bites, because these spices just linger and linger. Found with all kinds of fish (being on the Mekong delta, a wide variety of fish are absolutely central to the cuisine) and sometimes chicken, there are many regional variants. Which is just an excuse to keep on ordering it all the time really… 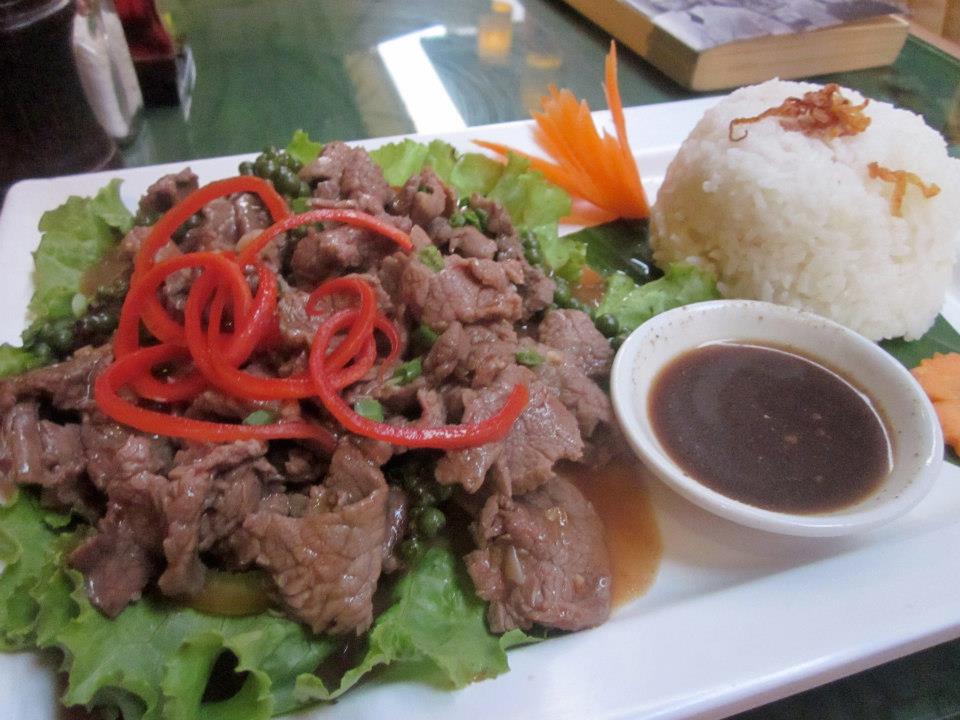 Lok Lak: Tender chunks of medium-rare beef marinaded in a soy, sugar and tomato-ey sauce, stir fried together with onion strips and garlic. The sauce thickens up to be more of a gravy and coats all the ingredients in a sticky, delicious glaze. Every time we had this dish it was served in a lettuce leaf on top of tomato and cucumber slices and garnished with finely sliced red pepper. You could choose either steamed rice or french fries, but we didn’t think fries were an authentic choice of side dish so we opted for the generous portion of rice ! There was also a little dish of dipping sauce, made from pepper and lime juice (we think!) which gave the soft meat a tasty tang when drenched in it. Really nice to have some good cuts of meat for a change, and it was never too heavy because of the salad it was served with – keeping it fresh even in the sweaty humidity of Cambodia.

Pumpkin Custard: Sadly not all food we had on our travels was delicious – we got the occasional stinker, and this was one of them. This ‘traditional dessert’ is made by carving out the middle of a small pumpkin and filling it back up with a mixture of egg, palm sugar (sticky brown sugar gloop) and coconut milk. It is then baked in the oven until the mixture sets, and then the whole pumpkin gets sliced up so that your serving has a rind of edible pumpkin flesh and a jiggly inner custard layer (think of an orange segment with the peel on, but the peel is edible pumpkin!).

We were hoping for a tasty sweet treat but in fact it was quite the opposite. With the consistency of bad crème caramel (which I am not a ‘flan’ of even when it is good) the custard tasted of egg and sour pumpkin – the sugar and condensed milk didn’t seem to get a look in! Even one bite was too much to handle, and we didn’t go back for more…

Despite most of the Khmer desserts falling short, the mains really made up for it (and who needs dessert when you’ve stuffed yourself full of meat!?). Through delicate combinations of spices and diligently-carved garnishes, Cambodian cuisine always seems like it has had a lot of attention paid to it, which of course will leave you feeling satisfied.

Next week, we shall be talking about Laotian cooking, which is really the ‘wild card’ from our travels. Intense flavours, strange combinations and preparation methods which can be violent and dangerous! We still bear the scars…