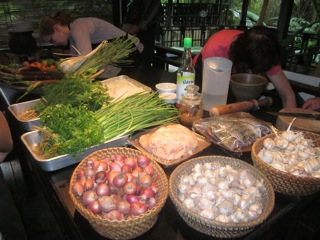 The third pit stop on our culinary tour of South East Asia is the frequently forgotten Laos. Due to difficult border crossings people often miss out Laos when travelling in the area, and having not heard much about it ourselves we didn’t know what to expect food-wise.

It didn’t remain a mystery for long – our first meal was a violent explosion of new herbs and spices and we knew we weren’t going to be in for an easy ride with this cuisine! Rather than spicy like Thai or rich like Cambodian, the Lao food was punchy and fragrant using generous amounts of uncooked herbs such as mint and basil scattered over the top of almost every dish. This was quite an invasive flavour profile to get used to and the first few times we tried it, we weren’t keen on it – the crunchy, leafy pungency seemed to mask all other flavour and you were left with peppery stalks in your mouth which was burning and not because of chilli…nice. 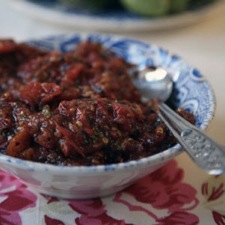 However, after a vicious cooking course (Laotians don’t chop and dice, they smash and bang and hurl things across the kitchen whilst cooking over charcoal ovens on open flames, from which I still bear a scar…) and some more practice in choosing dishes, we learnt that Laotian food is also eaten differently. Rather than just one dish, a variety of things are ordered including salads, meat and fish dishes, a soup, vegetables and sticky rice to dip in everything. Meals are very communal and small amounts of each dish are eaten because there are so many, meaning you aren’t so overwhelmed with the forestry on certain dishes! Once mastered, food from Laos was some of the tastiest we encountered.

Jaew: Not only a staple part of any Laotian feast, but also taken as a snack by many throughout the day, jaew is essentially a dipping paste. The main ingredient, unsurprisingly, is chilli. Lots and lots of chilli pounded together in a pestle and mortar (watch your fingers!) with salt, MSG, shallots, coriander, and a vegetable of your choice (the most common being tomato or eggplant). This leaves you with a chunky, spicy paste that can be combined with any of the other parts of the meal, but most commonly it is enjoyed just with sticky rice. Due to its consistency, Laotians use one hand to form balls of sticky rice before dunking it into a spicy jaew. Delicious, but for the inexperienced it became a rather sticky mess… 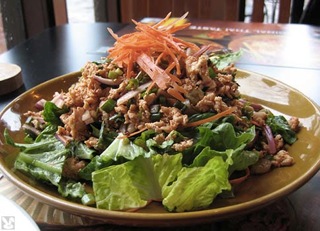 Larb: This dish is a combination between a salad and a meat dish – usually ground pork or beef is combined with chilli, mint, fish sauce and lime juice, and it can be eaten either raw or cooked. This is one where the flavour, and the sheer quantity, of uncooked herbs can get overpowering. Although having a mouthful between other dishes acts as a nice intense burst or palate cleanser.

Mok Pa: This simple yet delicious dish is normally a fillet of fish (Laos is on the Mekong River so Mekong fish are a big part of their diet) smothered in a paste made from herbs, garlic, fish sauce and chillies. The fish is then wrapped up in a banana leaf and steamed over their hot coal stoves. Upon unwrapping the banana leaf a beautiful aroma is released and the fish is so delicate and moist having soaked up all the delicious flavour from the accompanying ingredients. 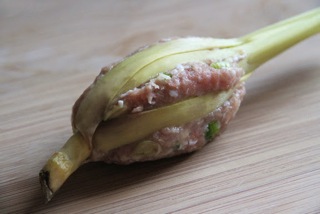 Ua Si Khai: This is the prestige of Laos cuisine: the ‘gasp’ moment. Laos cuisine isn’t overly-pretentious, but the ingeniousness of this idea and the skill required to make it are impressive (we required a lot of help on this one!). To you or I, this is chicken-stuffed lemongrass. Yes, lemongrass stuffed with chicken, not the other way around. At first we were baffled by this, and thought that it must have been translated wrong, but then sure enough, our cooking instructor was soon using a tiny knife to make loads of thin slits into the base of a lemongrass stalk. Once enough slits have been made, if you apply pressure to either end of the stalk it concertinas out forming a basket of thin tendrils. Into this you stuff minced chicken that has been pounded together with shallots and garlic until it forms a bulbous ball. Sounds delicious and artistic already right…but then, the pièce de résistance…you throw it into a bubbling brazier of oil and deep fry that bad boy. Crispy, fragrant and technically impressive, this is certainly the highlight of the Laotian menu.

Next instalment, we head to Thailand for a rather drastic change in the culinary scenery. Expect rich, thick, gloopy curries, lots of coconut milk and a hysterical Thai cooking instructor who made us dress up in silly hats.