Asia Bites: Chowing Down in China 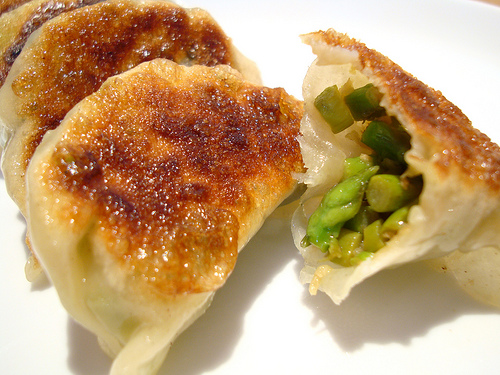 Our final pit-stop is Shanghai, the biggest city in the world, with a massive mish-mash of cultural influences. Trying to find ‘authentic’ Chinese cuisine here is not hard however, due to a distinct difference in the way that Chinese food and overseas cuisine is presented. Any Western food has a massively inflated price tag and is mostly found in upmarket restaurants, where generally speaking you would be spending the same price as in most large European cities. If you want authenticity, it’s easy enough: lining all but the most commercialised streets are plenty of local restaurants. The only catch? There’s nary an English menu or English speaker here, so prepare to play Russian roulette with your food. Whilst there were some horrible mistakes made, such as ordering jellified blocks of fat in sauce and tripe, most was pretty darn delicious. Here are some of the highlights:

A real favourite – little dumplings with a ground meat and vegetable filling which were served either steamed or fried. Obviously we preferred the crunchy, fatty fried version but the steamed ones did provide an interesting eating experience – they are often filled with a soup too so you have to be very careful on the initial nibbling so that you don’t squirt yourself with boiling hot soup! You have to slurp it out and then continue to eat the dumpling, after dipping in soy sauce, vinegar or chilli oil of course! These were sold in restaurants everywhere and at many street corners, and also in the frozen section of the supermarket – at less than £2 for 40 jiaozi we couldn’t resist and tried all the different flavours – the pork with sweetcorn, mushroom and carrots being the clear winner! 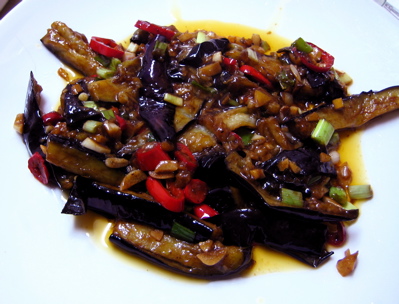 Recreated with varying amounts of authenticity around Shanghai, Szechuan cuisine is famed for being the spiciest in China. However, I don’t think that at any time we were completely bowled over by it. This may have been a result of South-East Asian chillies wreaking havoc on our palates, but to be honest, the type of spice is just plain different from what we were expecting. Instead of the sudden ‘omg, my lips are burning’ sensation of fresh chilli, Szechuan chillies are dried and used extremely liberally: we are talking upwards of twenty in most hot-pots. When strong however, the taste is more just overwhelmingly peppery, and doesn’t have as full a fruity flavour to the chillies we were used to. Despite this, the more gentle Szechuan dishes hit the balance perfectly, and provided a lovely tang with a richly glutinous sauce.

A simple yet satisfying dish found in most local restaurants is literally cauliflower chunks (that looked and tasted quite like broccoli), sliced chilli and soy sauce. This chilli packs a full-bodied kick and the crunchiness of the cauliflower makes this rather substantial and pleasing texturally. One of our favourite quick and cheap lunches at 60p per container. 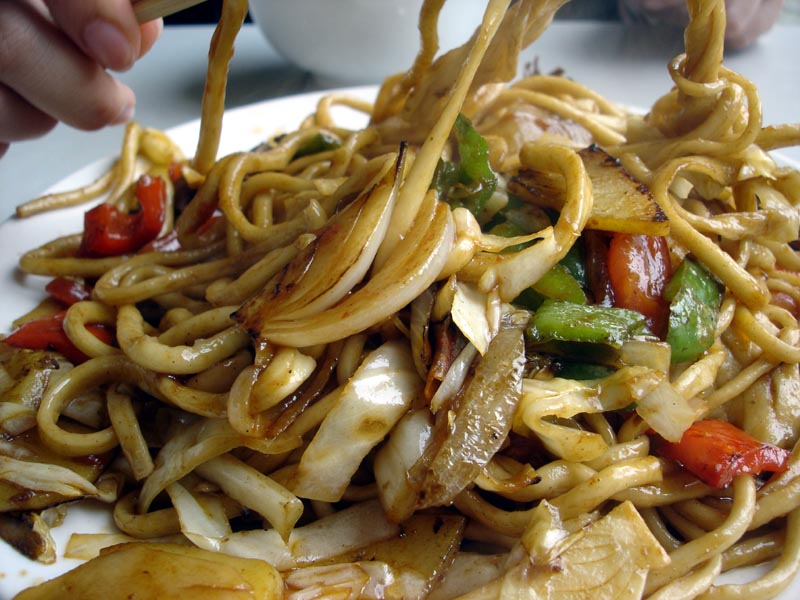 Tasty, hand-made noodles served in Muslim restaurants that were dotted all around Shanghai. These are halal places where you can see your noodles being stretched out in front of you – a truly amazing experience! Apparently it takes over 10 years to master the art and I’m not surprised with all the whirling and twisting that looks impossible and results in perfect noodles every time! The dishes are very similar and advertised by pictures on the walls – mostly different vegetables. Our favourite was one with beef, potatoes, peppers and onions, lathered up with chilli oil. The portion size also deserves a mention – an absolute mountain of noodles that could easily feed 3 people, all for about £1! A great and very satisfying meal when you’re starving.

Strangely enough, we saw these on more than one menu. In fact, they proved to be quite the popular delicacy in higher-end local restaurants. Suddenly greeted by childhood memories at seeing a potato-y smiley face, we had to order these crispy delights. However, it turns out that the Chinese really push the boat out, and garnish them up with some thinly sliced spring onions. Something we never ever expected so far from home and the days of school dinners!

So China concludes our culinary tour of Asia. We definitely ran into some of the more scary things here, but also learned to appreciate how little the Chinese people waste when they eat – even if it was kind of gross to see a man slurping a duck’s head clean or a girl chomping down on some fish lips and eyes. A step too far for us perhaps, but we certainly learnt to be adventurous and as a result stumbled across some delicious and authentic dishes which were very different to the English Chinese takeaway!