A Wintry Trip Down South 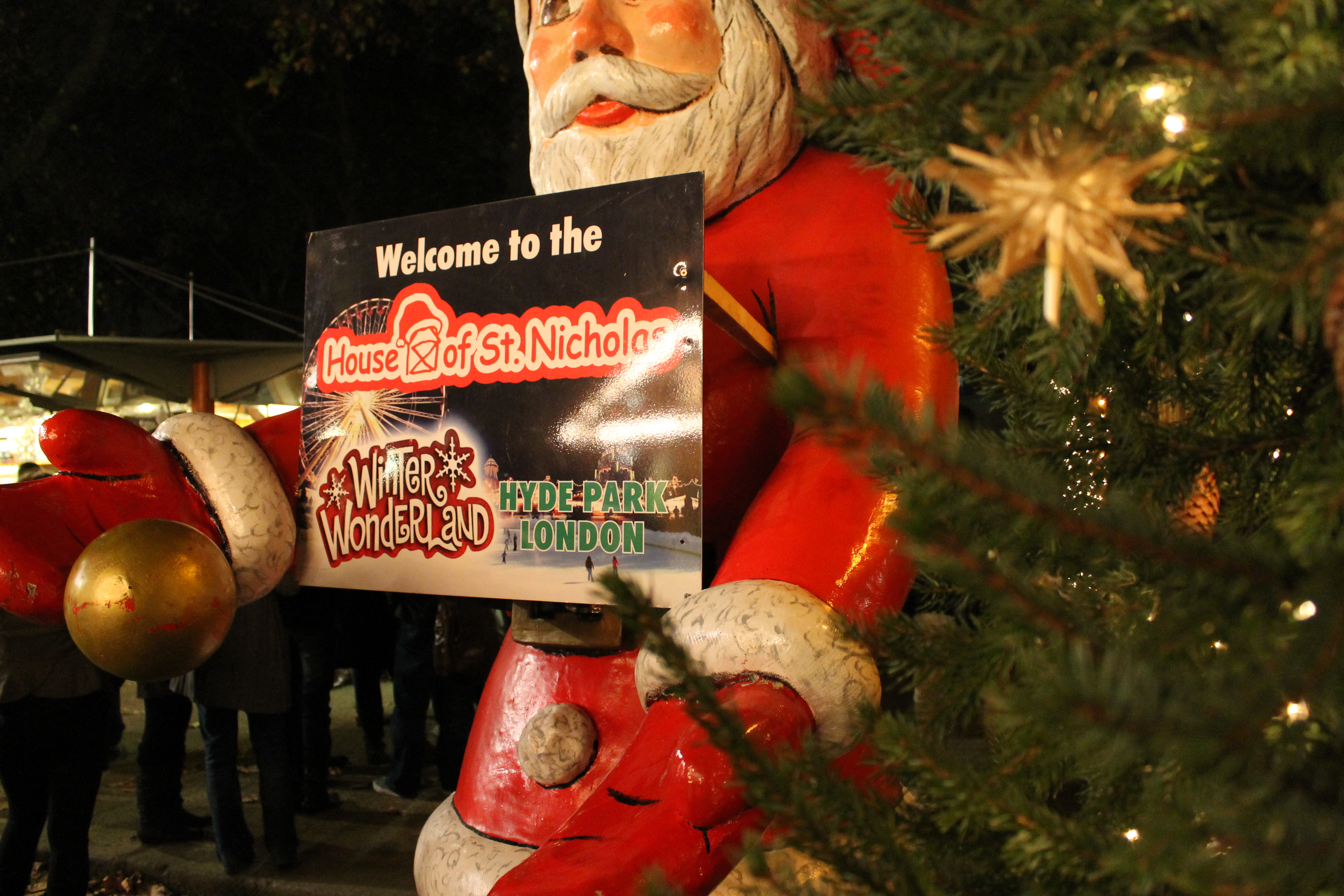 We are coming to that time of year when Durham lights slowly shut off as the most of town’s student population migrate away from their north east haven – let’s face it, a majority of Durhamites do – to the depths of the south where not only is it toastier, but where in the capital lies a hive of wintry activity. Whilst the warmth of London is somewhat welcome after the bitterness that is Durham wind, I believe that one thing compensates for the unseasonably warm Christmassy weather conditions: Hyde Park Winter Wonderland.

By now you should have at least heard of, if not visited, a Christmas market somewhere in Europe, perhaps the modest one that crops up for one weekend in Durham. Jealous if you’ve gone to a German-speaking country for one, though Hyde Park Winter Wonderland – affectionately known as a Weihnachtsmarkt or Christkindlmarkt – is a fully-fledged beer-drinking, folk-singing German Christmas market. And what do Germans love? Food. The real reason I went was because I was obsessed with the prospect of returning with a packet of caramelised cinnamon-roasted nuts (you think I’m kidding, but I never kid about nuts). Cue gushing about German food…

Winter Wonderland is home to a large number of independent stalls that set up shop in Hyde Park and, as my German housemate discovered, a majority of them are actually German in terms of heritage if not nationality. Disappointingly, some larger “chains” of Bratwürst sellers definitely are not, though this did not detract much from the authentic feel. Although on first entering the market you are bombarded with a wide array of wintry clothing and other such potential gifts, your senses (or at least my heightened, gluttonous ones) will undoubtedly lead you to divert your attention to the food. In spite of the massive singing, mechanical reindeer head. My personal recommendation is to go when it’s dark, or dusky at the very least, to get the full effect of the Christmas atmosphere. Two years ago I remember passing through Hyde Park and being very much underwhelmed. However, after deciding to give it another chance on a chilly November evening this year, I realised I had just been fooled by the fact that when I had gone before it was on a grey daytime – definitely not the right time to visit for festive cheer.

There are some very large stores from which to buy food. The Bavarian Village would be one main attraction, boasting an authentic German man singing folksy tunes to get you in the mood. My German housemate was thrilled, declaring “it’s just like being at home!” and whilst I was amused, I was significantly less enthused. A significant amount of Glühwein was required in any case, the star of the Christkindlmarkt for sure. Glühwein is mulled wine, but with a kick of deutsch: either a shot of rum or liqueur. I tried the cherry flavoured one, which packed a punch of – what else? – cherry liqueur. It was amazing – forget I don’t even like cherry very much. Maybe it was the warming sensation, but it was certainly worth the extortionate £4.50 I had to pay for it: a London tourist attraction after all. Smells of Bratwürst hot dogs and sauerkraut emanated from beside the drinks station, and I am sure you will be tempted on an empty stomach.

Other stars of the market were, for me, the endless numbers of fudge stores. Each had their own different varieties, some featured sweets like large swirly lollipops, others supplemented the fudgey goodness with alcohol flavours, of course. Fudge seems to be predominantly British, however; I am told that in Germany it is more about the marshmallows dipped in chocolate (Dickmanns, if you will). If you’re feeling adventurous, you should definitely try the fudge – but be warned, I was definitely put off purely by the prices. It is London, but London on a Durham budget may not be so feasible. Or on a student budget. Just a heads up. 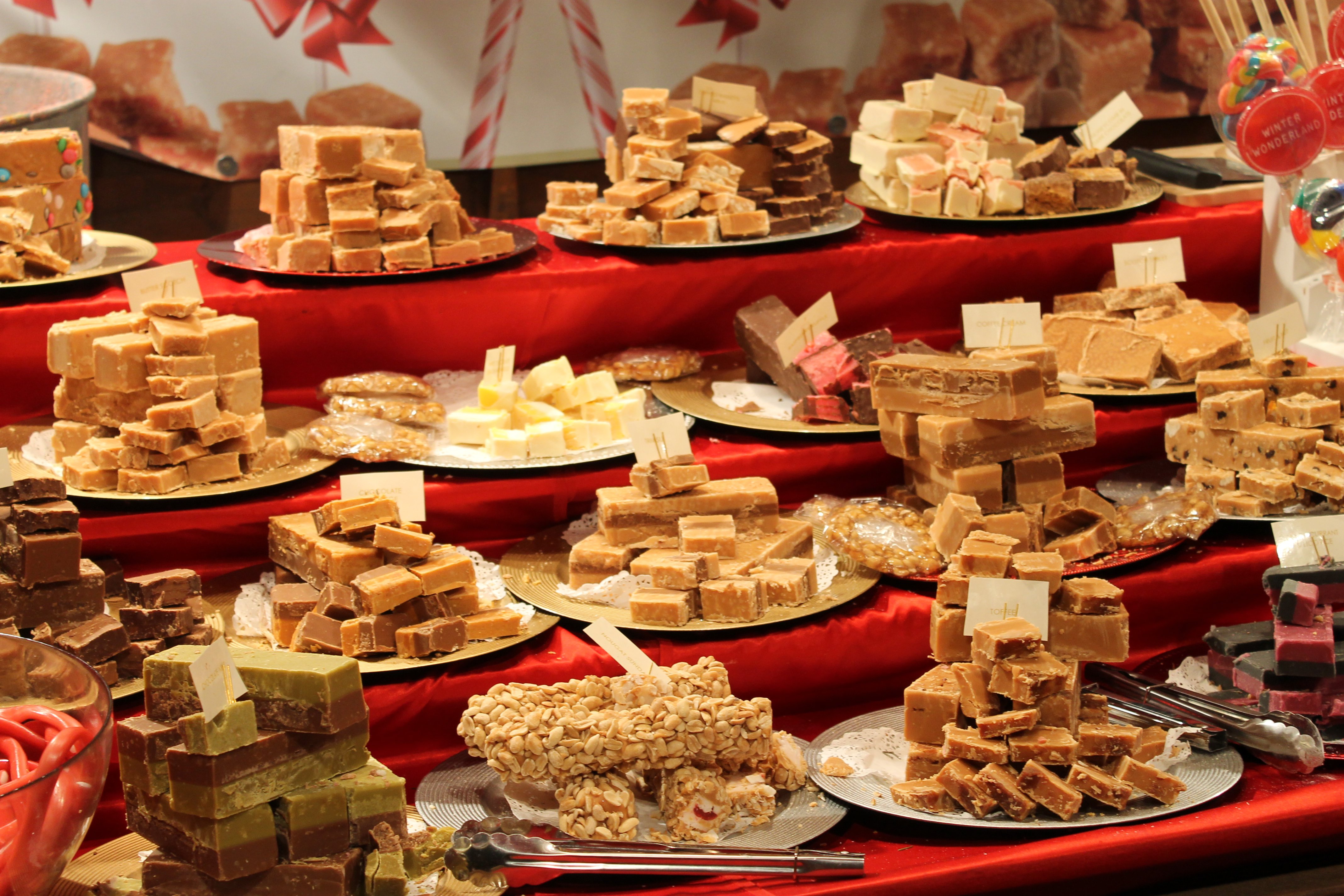 The mouth-watering selection of fudge on offer. Image: author’s own.

I think the stall I was most pleasantly surprised to see was the Haribo Pick and Mix one. Just to confirm, Haribo is German – not French, Danish or Norwegian (as I found some people believed). Though undeniably simple, it still fills my little childish heart with joy to see so much sugar in one place, reminding me that the world is your oyster, and the Hyde Park Winter Wonderland is your guilty pleasure. The standard Christmas market fare is of course present – crêpes, hot chocolate, churros, pretzels, hot dogs. It was certainly an overwhelming selection, which came complete with a Carousel bar to further spin your heads round all the amalgamating smells and sounds of Christmas. It reminded me that the market was not only a food lover’s heaven, but also a children’s playground with helter skelters, ferris wheels, spinning rides – it even boasted a circus and the Power Tower – a stomach-churning drop. Not recommended after doing the food walk I have just laid out.

My favourite stall by far, as alluded to earlier, was certainly the nuts stall. The same stall is dotted around the various stands at Winter Wonderland three or four times, so there is no chance of missing out. Hanging above the nuts are gigantic heart shaped cookies, covered in decadent icing and screaming cliché with various cringe-worthy greetings scribbled on. These are the standard Lebkuchen, soft gingerbread. Next to the nuts are chocolate covered apples and other fruit, which as usual, I had to force myself not to buy, although I do recommend trying one for the sake of it. Of all the things in the market, these are probably the least stupidly priced, given that it is a rather large apple.

It is for the undeniably memorable foodie experience rather than the packed outdoor ice rink that I would go back to Hyde Park Winter Wonderland again, and why you too should venture there as part of the Christmas experience, if you happen to be in the capital. Arm yourself with cash (as that area is notorious for its lack of free cashpoints), bundle up warmly, and empty your stomachs. In the rain, snow is glistening…walking in a Winter Wonderland.