A toast to Toast 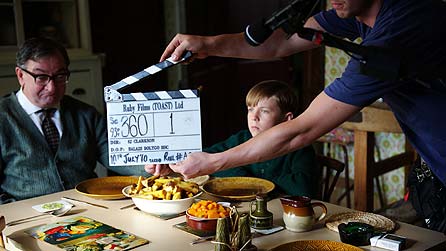 Toast is a BBC adaptation of Nigel Slater’s autobiography

Something awful happened this holiday. I correctly predicted the knife Nigella would use to cut up a batch of gingerbread. This is what comes of an addiction to cookery programmes. Although it was a sign that, as my mother put it, I should get out more, I felt that Toast, the dramatisation of Nigel Slater’s autobiography of the same name, required my attention. I’m pretty sure 30 December is dedicated TV-time anyway.

In a unintended turn of events, I ended up watching Toast after making a recipe from Slater’s most recent book, Tender, for apple and blackcurrant turnovers and it reminded me of the things I associate with his cooking: a handful of fresh and simple ingredients, well-assembled, unostentatious and comforting. The origins of this approach to cooking can be found in the early scenes of Toast. The taste world of his youth is resoundingly British and traditional. A dish of spaghetti causes his mother to have an asthma attack and his father to proclaim that Parmesan smells like sick. Incidentally, I think Parmesan smells like feet although this has never prevented me from eating it. The creations of his stepmother Mrs. Potter are very definitely from the meat-and-two-veg school of cookery and there is an early shot of the young Nigel delighting in eating radishes straight from raised beds in his parents’ Wolverhampton garden, a scene that would trigger a severe case of déjà vu among followers of his Simple Suppers series. Young Nigel’s line “I’ve never had a vegetable that didn’t come in a tin” would explain the remaining fascination with the most humble of fresh produce and with creating the simplest of meals. All this boiling of tins, however, leaves me with one question – why did the family have an AGA? I assume it was the 1960s equivalent of the twenty-first century cheese knife set: something pointless and unused.

These links between his early childhood and his later cooking may seem a bit contrived, or that might just be because I was looking out for them after the turnovers, but something more significant comes through in Toast. For Slater, food was evidently a solace and an escape from his surroundings. It gave him a sense of satisfaction and worth. It gave him something to obsess over. It gave him everything his unsatisfactory early life had lacked. You get the impression that these emotions have ever since been poured into every one of his culinary creations and that they both constitute and explain the comfort, depth and appeal of his recipes. Even if his demeanour, turn of phrase or haircut are not to your liking, it is a hard soul or a fussy eater who would turn down a plate of his food. The magnetism of Toast, however, did not only come from its well-crafted exploration of Slater’s experiences of cooking but also that it appealed to universal (or at least my own) experiences of cooking. The emotions that worked their way over the faces of the young and older Slater are the same as those that find themselves on mine when food is involved: enjoyment, self-competitiveness, excitement, frustration and pride.

Learning about the background of people I admire and would like to emulate sometimes fills me with a sense of regret that I have missed my chance when it comes to developing a prodigious talent. At first, Toast did give me these feelings of lament: why did I not start obsessing over cookery books at seven? Why did I not start developing recipes of my own at eleven? If only my school had offered home economics lessons perhaps I too could be halfway to the kitchens at the Savoy if only I had started earlier! After dragging myself out of a pit of self-centredness however, I began to realise that this was hardly the most useful way of learning from Slater’s example because Toast shows that the secret behind Slater’s cooking is to be found not in the constituent parts of his childhood but in the sum of his experiences; together they gave him a reason to cook and the emotion with which to create such successful dishes. Rather than regret missed opportunities therefore, I should attempt to add a spoonful of feeling to my own modest kitchen pursuits.