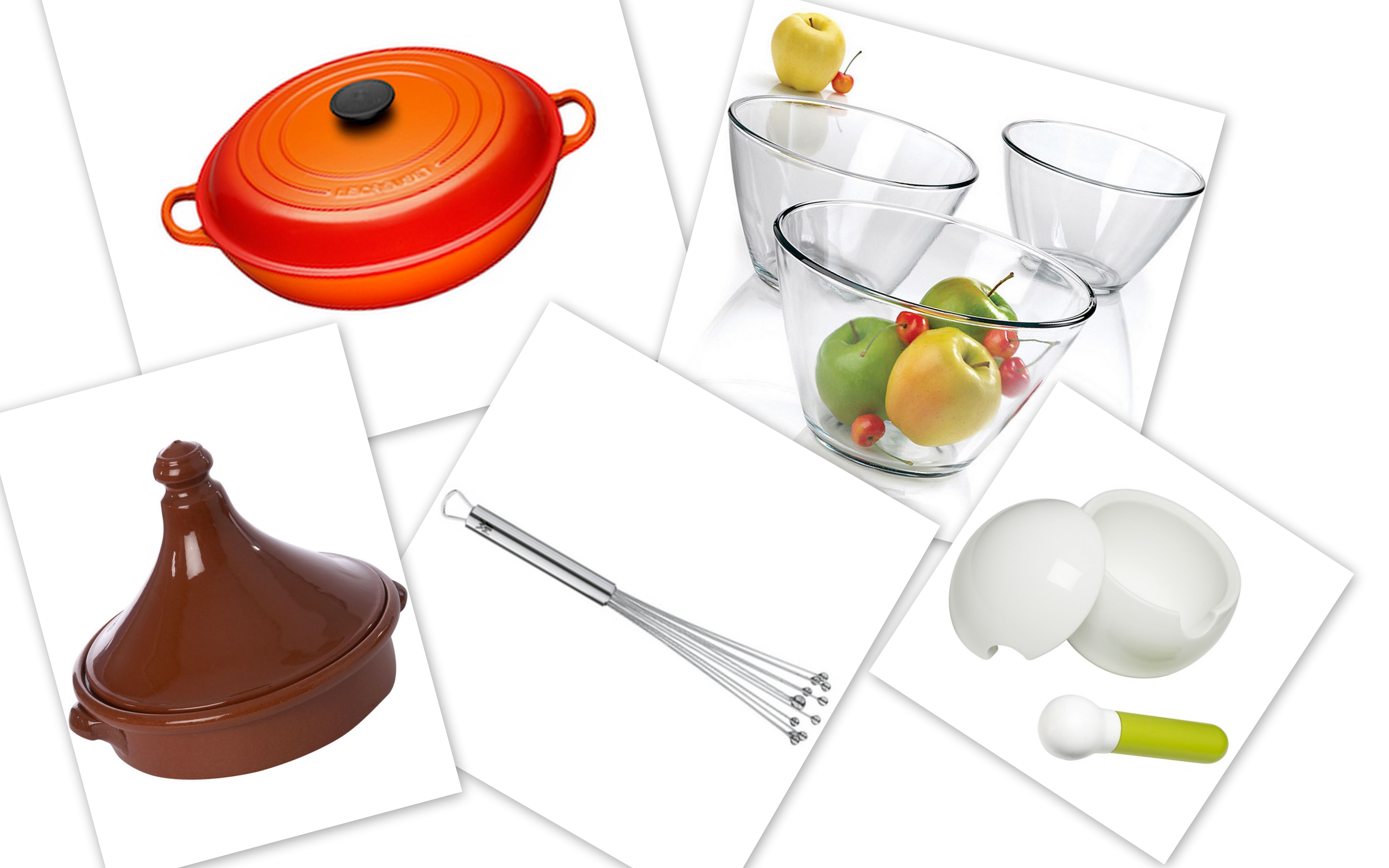 Just a few of the things that Annie has on her wish list. Images put together by Annie Lund.

1. Putting something Le Creuset on this list was pretty much inevitable, so I thought I’d get it out the way first. I chose this because I always seem to be missing something that goes from hob to oven.

2. I’ve seen these whisks around now quite a lot, including some product placement in the most recent Nigella series and I’m sold, really.

3. There’s something so recognisable about a Pyrex bowl, that serving from it looks pretty naff, as naff as the word naff in fact, but these are much better.

4. I think wanting a shows my slight obsession with pastry making. In my mind I imagine myself deftly flicking this around on nice marble work surface with a satisfying scraping noise.

5. Bashing spices with the end of a rolling pin may be a legitimate replacement for a pestle and mortar, but has more often than not resulted in bruised finger pads and stained handles. I would therefore like to invest in one of these.

6. I promise that my desire for a tagine is not some cripplingly embarrassing way of suggesting I am well travelled. Instead it is for the boringly practical reason of hob-to-oven use, and the idea of removing the lid and the flavours I have created knocking out diners.

7. As a glorified sandwich bag, this is possibly the most boring of my items, but no doubt the one which, if I actually owned it, would get the most use.

8. From the most boring to the most inventive: a . Design delight.

9. Buying a plastic drizzler like this would probably be completely pointless for me, as I can’t remember a time when I’ve made a sauce fine enough to be drawn onto a plate. It also reminds me of a particularly painful episode of Masterchef: the Professionals when some poor person failed to pen straight lines of some cream sauce on a plate, under the twitching eye of an obsessive-compulsive Michelin-starred chef. At £1.50 though, it doesn’t seem like too much of a waste of money.

10. Muffling the gimmick alert sounding in my head and its rather sinister “meat warmer” feature, this Toast n Egg must be the solution to early morning laziness.

12. Cheese tasting at La Fromagerie. Enough said really – La Fromagerie is one of the best, and best-known cheese shops in the UK although I’m sure there are many local equivalents that rival it.

13. This way of cooking and presenting food in this stackable oven-to-table cookware seems to me to have Swedish and Japanese influence, perhaps the ultimate in aesthetically pleasing design.

14. I’ve always wanted to go on a cookery course, and there are ones to suit every whim although I can never really tell what level my cooking is in comparison to their grading systems. The Ashburton Cookery School is well known, but the choice of course once again reflects my own interests.

15. Knives are things I’ve never really invested in, or researched but after years of wondering how celebrity chefs chop so quickly. Obviously some of it is down to catering school technique, but I’m increasingly realising that one of these could transform my own prep.

16. Very much at the gimmicky end of the stocking filler category, these pills reverse the sensations of sweet and sour flavours on the tongue, presumably allowing you to eat whole lemon if you felt like it.

17. In one of the product reviews for this , which turns boiled eggs into cubes, a woman has written about tricking her mother into believing hens could now lay in such regular shapes. Talk about taking advantage.

18. I just saw this plastic fake food, and thought immediately of primary school, with the Velcro between slices of bread, and the nibbled sweetcorn, and thinking I was duping my teachers every day when I offered them a (plastic) bourbon. I’m sort of tempted to buy it and turn it into a mantelpiece decoration.

19. This morning, I watched one of my housemates attempt to take the top off an egg balanced on one of our glasses. As amusing as this was, an egg topper would probably have reduced the chance of yolk falling in my orange juice.

20. Wanting seems very outmoded nowadays, with the rustic revolution in food but if you look beyond this they double as moulds for the equally prominent bed revolution on menus e.g. “on a bed of crushed new potatoes/roast vegetables/wild sorrel”.

21. I have borrowed this book, from my library at home and can therefore agree with its positive reviews. You can look up ingredients individually, or simply browse its pages for inspiration and is particularly good for the aspiring but not yet accomplished improvisational chef – me.

22. This is sort of in the same vein as The Flavour Thesaurus, but I thought it would be useful for student houses which cook communally, but whose inhabitants have differing dietary requirements, as well as those moments when, half way through a recipe, you realise you’re out of something.

23. Although there is a whole library of cookery magazines on most shelves, the most innovative publication I’ve come across is Fire and Knives. It doesn’t pay its contributors so new writers are welcome and old writers can publish things that wouldn’t get published elsewhere. It aims to have pieces on all angles of food. As they say themselves, “we’re unlikely to have space for ‘simple suppers’ or ‘101 ways with mince’”.

24. I’m pretty sure I like everything Dan Lepard makes, and I would recommend everyone to at least leaf through , written with Richard Whittington. Not only are the methods exceptional, but the flavour combinations too. This man is a real obsessive.

25. There’s always something to aspire to: the .