Sheridan Uppity-Phlipfile in Flipside on 1 May, 2013. 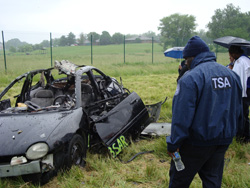 I mean, does this look like the work of a cat?

Last night, at 11.21pm, Abraham Centworth, senior foreign correspondent for the notorious online comedy publication, Flipside, was killed when his car exploded on 34th Street, Manhattan, just outside the Jacob K. Javits Convention Center. Crime scene investigators have concluded that the explosion was the result of deliberate tampering.

Abraham Centworth was attending a conference on the international impacts of the number three. Leaving the conference drinks reception at just past 11pm, he entered his car, which was then consumed in a great ball of fire.

“It was incredible,” said Myria Moody, a senior lecturer on the significance of three on the Arctic ice shelf. “I was just outside taking a hit, when there was this almighty noise. I hurried out of the alleyway to find the blazing wreck of the car outside the Convention Centre.”

All the major international crime and terrorist organisations have claimed responsibility for the incident:

“No, this is an attack on British oppression,” said the Real IRA. “That’s our remit.”

“We made him an offer,” said the Mafia, “and he refused. We’ve never had that before; I guess some of the guys didn’t know how to take it.”

Mr Cuddles the Cat, Centworth’s boss, offered these words when we visited him:

“Centworth was an honourable man, a talented reporter and a skilled analyst. We shall miss him dearly.”

We then informed Mr Cuddles that we were here on the subject of Yorkshire ice cream and that the news regarding Centworth wouldn’t be broken for another two hours.

“Oh, shit, so no one knows about this yet? Well, in that case, I retract my previous statement. I know nothing about this and you can’t prove anything.”

At this point, he removed the labelled maps of Manhattan, the jars of nitro-glycerine and a dartboard covered in pictures of Centworth from his office.

Abraham Centworth was a loyal and innocuous member of the Flipside team, and why anyone would feel it necessary to kill him is unknown (and it certainly wasn’t me – Cuddles). His affiliation with a splinter movement within the publication, led by Olivia Pryer (Splitters! – Cuddles) is unsubstantiated. More likely, this was a reprisal for his crippling gambling debts and his involvement in drug rings from here to Singapore.

(Good, now shut up before people start getting suspicious – Cuddles)