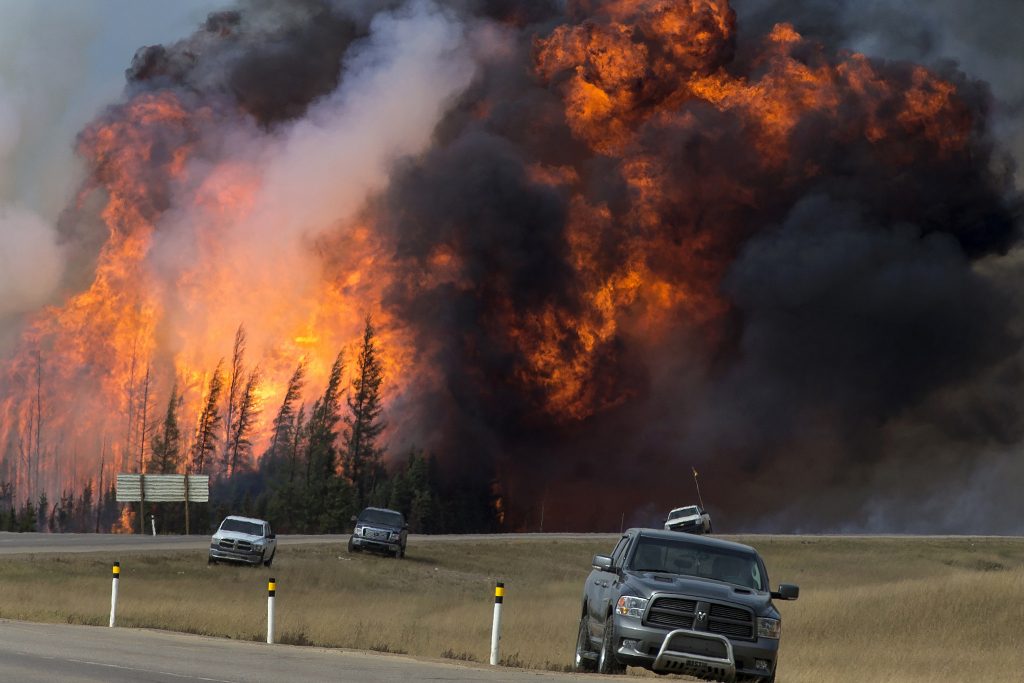 Flames engulf a forest south of Fort McMurray on May 7th.

Ferocious wildfires began ravishing the oil rich city of Fort McMurray in the province of Alberta, Canada on Monday 1st May. Approximately 1,610 sq km (620 sq miles) were affected and have been profoundly damaged. The fire was large enough to be visible from space. Migration of the population has been on a scale never seen before in Canadian history, with over 88,000 people fleeing the area last week. A state of emergency was declared by Canadian Prime Minister Justin Trudeau. The government has pledged significant cash funding to help those made homeless and destitute, with C$100m (£53m, $77m) promised. There were no fatalities directly related to the fire, but, sadly two people died in a car crash whilst leaving the city.

Climate and weather conditions were the perfect catalyst for fuelling and stoking up such a powerful environmental force. It also hindered over 700 firefighters and emergency services in their attempts to stop the flames. It was only on May 8th that headway was made and the fire was reduced due to rain, lower temperatures and favourable winds. Certain hotspots are still continuing to burn and overall the fire is increasing in size, though at a significantly slower rate to last week.

On Tuesday 11 May 2016, Alberta’s provincial leader suggested that 90% of buildings have survived the natural disaster – a surprising and fortunate number considering the grave fears and media speculation last week. The damage is still significant and will take a lot of time and resources to rectify, with 2,400 out of 25,000 structures having been damaged. In many ways the fire hasn’t followed a logical path of destruction, in some places one street can be completely razed to the ground, but the next street is unscathed. The main city area of Fort McMurray is completely fine, almost as if nothing has happened, reports suggest. Vital infrastructure has been damaged and contaminated, there is no power, water or gas, in much of the city. Power grids are damaged, gas pipes cut off and water unsafe for human consumption. But, the hospital and schools are still in tact, bringing a sense of normality and support to children as they return to a very different home.

City officials are in the process of drawing up a timeline of the damage and the steps to recovery, return and reclamation of Fort McMurray. Many families are stranded in evacuation centres, formed in an emergency in towns outside of Fort McMurray and are unsure as to when they can return. Reports suggest that it will be months until the city gets back to its former self, but in the meantime contingency plans are being drawn up to help the devastated and shocked population.

It is important to consider the wider impacts of this fire. Fort McMurray is a key stakeholder and producer of Canada’s oil sands. Up to half of production capacity is disconnected, this will have severe economic and social effects. It is also a key global player, with one of the largest oil reserves in the world, after Venezuela and Saudi Arabia. Prior to the complications of the wildfire, Canada was already feeling the effects of a dip in oil prices globally. So, with a wildfire to contend with, the impact will be amplified, not solely in Canada, but globally. The way that the developed nation of Canada and the population of Fort McMurray deals with this wildfire will be significantly different to that of a less wealthy country, providing a useful study for global inequality, in terms of access to money, infrastructure and ability to rebuild after a disaster.

Fort McMurray is yet another example of an environmental disaster which has catastrophic impacts for the population implicated.