When Will World Aid Step Up To The Plate? 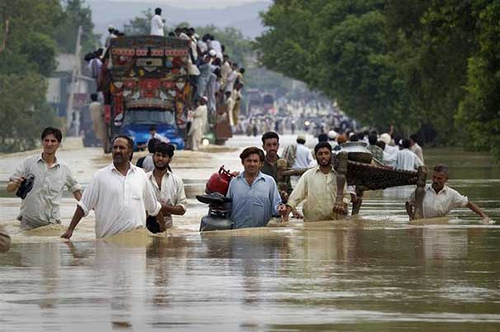 The floods in Pakistan affected millions of people

December 2010 extinguished itself in a whirl of wrapping paper, snow-flakes and baubles and a new year is now upon us. January is always a reflective time where we consider improvements we wish to make about ourselves and set goals for the year ahead. The target I want to put forward as of utmost importance in 2011 is a massive improvement to the ability of the international community to provide more – and more efficient – disaster aid.

Every year devastating natural disasters claim the lives and homes of millions of people. The past 12 months have seen the devastating effects of floods in Pakistan, Brazilian landslides, an earthquake in Haiti and more recently the Australian floods.

July 2010 saw Pakistan hit by the worst flooding since 1929 where Pakistani authorities say as many as 20 million people were affected. The heavy monsoon rains in the Khyber Pakhtunkhwa, Sindh, Punjab and Balochistan regions of Pakistan affected the Indus River basin to such a significant extent that at one point approximately one-fifth of Pakistan’s total land area was underwater. Pakistan were struggling to cope with such a large scale disaster and by the end of July, they had appealed to international donors for an aid response. The United Nations launched its relief efforts and appealed for 460 million to provide immediate help, including food, shelter and clean water. However some 20 days later the UN Emergency Appeal had reached only 200 million, less than half its target. The UK’s International Development Secretary, Andrew Mitchell, criticised the international community for being slow to tackle the crisis and as many as 6 million people were desperately still in need of emergency aid. In the months following the onset of the floods, more aid pledges for Pakistan have come through after complaints that the international community’s response to the devastating floods was inadequate.

The disastrous effects of the Pakistan floods were two-fold however. There were further victims in neighbouring Afghanistan, whose food aid for the winter months was cut off by the floods interrupting delivery as approximately 80% of the world food aid for Afghanistan passes through Pakistan. The World Food Programme aims to provide aid to 3.8 million people in Afghanistan in autumn before the winter weather blocks off mountain roads for months. However the flooding not only destroyed infrastructure, making this impossible, but 16,000 metric tons of Afghan-bound wheat were in warehouses in Pakistan awaiting customs clearance when the country was engulfed in floods, destroying the food aid. Due to an inadequate response to the floods, another 6,000 metric tons of food that was initially intended for Afghanistan was diverted to feed Pakistanis who had no food because of the flooding. The wheat lost to Pakistan’s floods was insured, but purchases typically take about three to four months to arrange. Aid was so desperately needed for the two disasters and victims were putting their energy into protests demanding help from the government, help that should have been given without having to be asked.

Whilst it is necessary to advocate a realistic opinion about world aid, surely it is not naive to expect more. In the modernised world of today there can be no excuse for the disaster response to be so slow and certainly no need for millions to go without food.

A more optimistic success story showing world aid as more heroic is the 2010 disaster of the Chilean miners who were trapped for over two months. Whilst this was a much smaller scale and concentrated effort, it nevertheless shows how international aid can pull through to help those in need.

The plight of the Chilean miners caught the attention of the world. 33 miners were trapped 700 metres underground for 69 days. The poor air quality in the mine – not helped by their spirits being bolstered with supplies of cigarettes – put the miners at risk of depressed immune systems, partially collapsed lungs and asthma from inhaling mould and dust. The warm, damp conditions were ideal for ringworm, athlete’s foot and other fungal infections to spread. For the first 17 days of their ordeal the men were unable to brush their teeth and some developed gum disease.

The miners were delivered essentials through an 8cm borehole by rescuers and experts were flown in from around the world to help with the rescue mission. At the request of the Chilean Minister of Health, NASA dispatched a team of two doctors, a psychologist and an engineer to aid the rescue effort. They offered help on how to extract the men and the design of the capsule, and drew up a strict diet for the miners to ensure they were healthy enough to endure the rescue.

It appears all the stops were pulled out for the Chilean miners and so it makes you wonder why this cannot be amplified and be re-enacted on the global stage helping larger scale disasters. In a world where Americans alone spend 7.2 billion a year on cosmetic surgery it seems astounding that world aid cannot provide adequate resources for so many of those suffering through no fault of their own.

It is astounding that in 2009, Goldman Sachs gave out more money in annual bonuses to its workers than was donated by wealthy individuals and companies to help save the lives of poor and suffering children. Goldman Sachs was then helped out by the US government when they struggled with bankruptcy yet Sachs (as well as other large corporate companies) have still yet to increase or even reconsider the money they donate to aid, emergency and otherwise. It appears true to say that the wealthy have an uncanny ability to oppose aid for everybody except themselves as aid rarely appears to be given for motives of altruism; there are often strategic considerations and political alignments involved.

International aid money appears to require two conditions through which it can be used effectively, good governments and strategic plans for use of the money. The criticisms of international aid appear to be made by ignorant people who argue that the money is just vanished into the black hole, but if we use international aid money to help educate and shape effective planning, we can watch donations being put to effective use. Whether in an emergency situation or as part of a continuous lifeline to those in poverty, aid is vital to the lives of millions, and so it should be a top priority on the global agenda to do everything in our power to use it as a tool to help those in need.

Over 25 years have passed since we took our last step up in addressing issues on international aid, Live Aid. I’m not suggesting it is time for another pop concert but isn’t it surely time for our awareness and commitment regarding world aid to be renewed?