Wake up, Britain: The most successful student movement you’ve never heard of 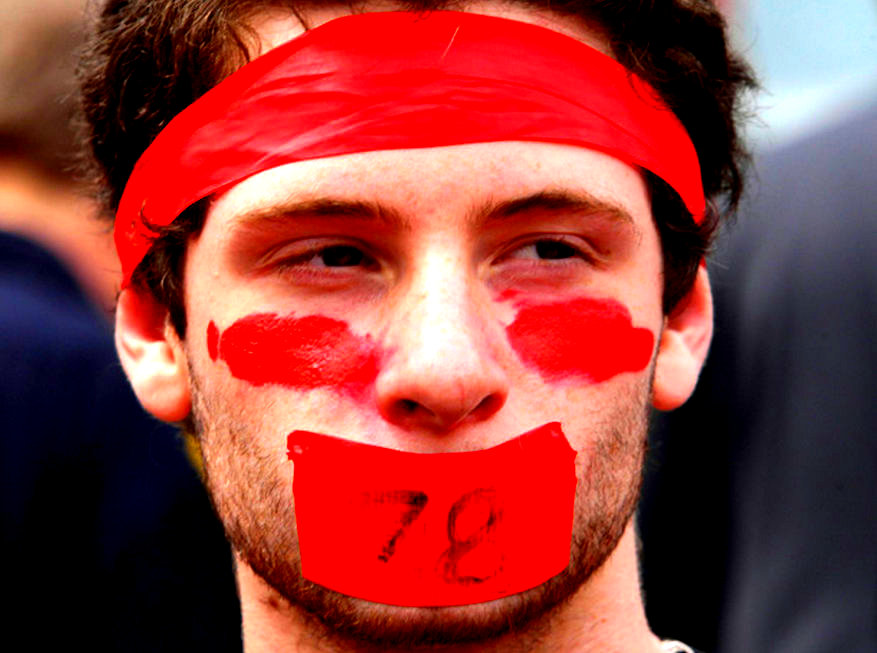 Students in Quebec lead demonstrations after tuition fee rise in 2011

The beginning of the academic year has seen the roaring victory of Québécois student activists alongside relative silence of their counterparts across the pond. Both groups have been fighting for the same thing: the reversal of government plans to raise university tuition fees. But while the British National Union of Students (NUS) is becoming a calm lobbying organization, students in Quebec have not only gotten their way with tuition fees but also overturned the social fabric of their province.

The province’s Liberal government that initiated this past year’s fee increase, led by Jean Charest, was defeated this Autumn. Charest has resigned from politics – in his place is the province’s first female Premier, Pauline Marois, head of the Parti Québécois. The change did not come easily but as a result as the most prolonged and extensive protest in Quebec’s history, which caused social unrest for months.

Quebec’s tuition fee increase was announced in the spring of 2011: the provincial government planned to raise fees by C 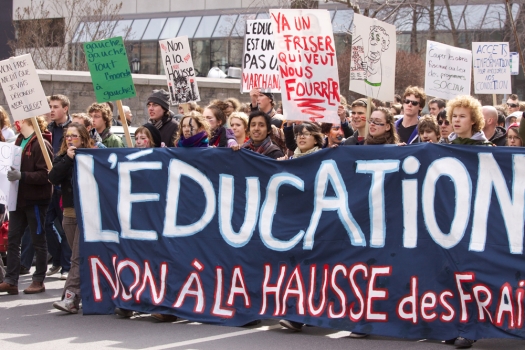 On March 22nd more than 300,000 people gathered in downtown Montreal.

325 a year over five years, an increase of 75 per cent totaling C1,625. In the broader context of North American tuition fees, the increase seems negligible. Quebec’s current fees, which stand at about C2,519, are the lowest in Canada and a cakewalk next to those at American universities.

However, a brief look at Quebec’s history provides an explanation for the student reaction to a potential rise in tuition fees – a movement known as the Maple Spring. The social unrest in Quebec surrounding tuition fee hikes is rooted in the province’s Quiet Revolution of the late 1960s. During this time, the province’s francophone majority fought for full access to higher education.

The Quiet Revolution kicked off a student movement with a strong democratic culture and strength in grassroots organisation, whose signature move is the mass strike. Each time the government attempted to raise tuition fees, students walked out of classes. Since 1968, Quebec students have gone on strike eight times. In 2005, for example, Quebec students forced the government to reverse plans to turn more than C103 million of scholarships into loans.

Quebec’s ninth strike began on February 13, 2012, and was initiated by the province’s most militant student group, the Coalition Large de l’Association pour une Solidarité Syndicale Étudiante (CLASSE). Students walked out of classes, demanding the government rescind the planned fee increases and place a freeze on fees before returning to class. Approximately half of the bodies on strike were members of CLASSE. The other two major associations involved in strikes were the FEUQ (the Fédération étudiante universitaire du Québec), and FECQ (the Féderation étudiante collégiale du Québec). Campus-based direct democracy allowed students to meet and discuss the strikes. On the 22nd of each month, students participated in a mass mobilisation of tens of thousands of students in downtown Montreal.

After months of strikes, the Charest government’s refusal to acknowledge or respond to striking students’ demands resulted in the largest demonstration in Canadian history. On March 22, more than 300,000 people gathered in downtown Montreal. Subsequently, the government did invite student representatives for “negotiations” in late April, but never bargained directly on tuition fee hikes. Students responded with more creative forms of protest, ranging from naked marches and picketing classes to blockading government building and banks.

Eventually, what started as a student-centered fight became a wider movement involving all of Québécois society. The turning point occurred with a huge mistake on the part of the Liberal government: the implementation of Bill 78 in May 2012. The law was passed as an emergency measure in response to the paralyzing effect demonstrations were having on society, especially in the city of Montreal. It declared any demonstration of more than 50 people illegal at any location in Quebec unless the locations, duration, and means of transportation used by applicants were submitted to and approved by the Quebec police. It was then possible, at the police authority’s discretion, to modify the location and date of the protest if they judged that the protest would pose a significant threat to public security.

Instead of repressing student protests, Bill 78 connected activists with various other groups who before the law were ambivalent towards the students’ cause. Canadian and international news outlets served a constant reminder of the law’s anti-constitutional nature. Amnesty International condemned the Bill as well as the Quebec police’s conduct throughout the protests, in which thousands were pepper sprayed, tear-gassed, beaten, detained and released. As a result, the monthly demonstration on May 22 had a turnout of an estimated half a million law-breaking protestors, many of whom were not students but supporters of what had become a much broader movement against the provincial government.

The Maple Spring has also been acknowledged as a fight against the province’s neoliberal austerity agenda, with trade unions, teachers and groups around the world joining in the movement. In the words of Canadian journalist Martin Lukacs, the students’ fight has clarified that “a tuition hike is not a matter of isolated accounting, but the goal of a neoliberal austerity agenda.”

“Forcing students to pay more for education is part of a transfer of wealth from the poor and middle-class to the rich – as with privatization and the state’s withdrawal from service-provision, tax breaks for corporations and deep cuts to social programs.” Indeed, now that the students have achieved their goal of freezing tuition fees, they have moved on to fighting other issues. CLASSE, for instance, has turned to free education as its long-term goal.

Even with the abolishment of tuition hikes, the struggle of Quebec students is not over – the Parti Québécois showed only shaky promotion of the movement throughout the year and is not necessarily one of its allies. Alongside popular support, the student movement has been heavily criticized in the media for bringing to the surface dangerous nationalistic sentiments and for disrupting public order. With students now returning to classes, police inquiries beginning, and the new political term of the Parti Québécois, it is often difficult to judge the students’ actions or their lasting effects on society. Nevertheless, their determination has provided an important model in the politics of civil disobedience. Perhaps British student protests, which are being revived this Autumn after a two-year silence, can learn from Quebec’s methods.