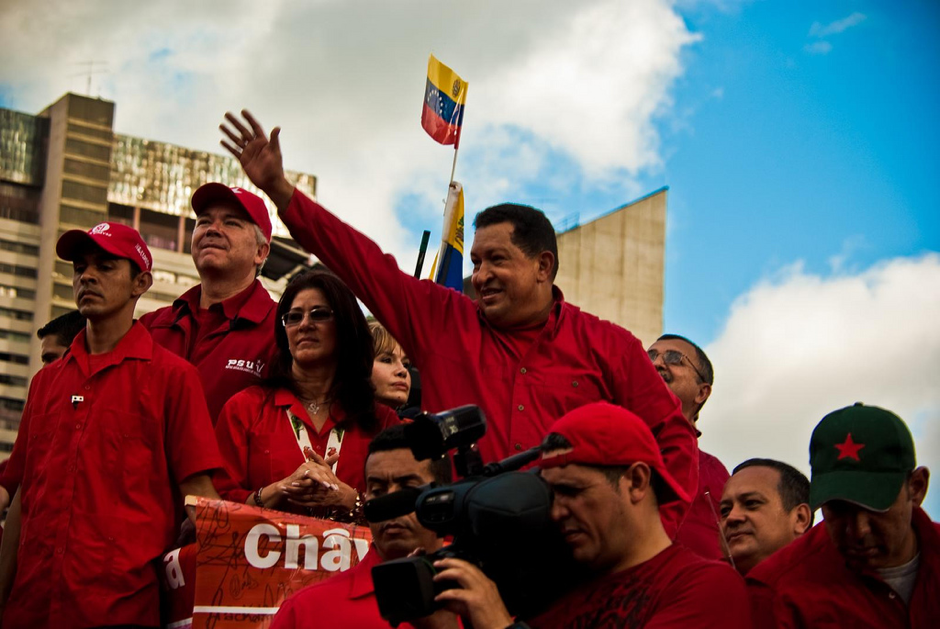 Hugo Chávez left dual legacies – in the state and in society.

December’s crushing electoral defeat for the Partido Socialista Unido de Venezuela (PSUV) left socialists around the world with some perplexing questions. With this dramatic rejection of embattled President Nicolás Maduro by a majority of Venezuelans, something feels amiss about continuing to offer solidarity for Hugo Chávez’s successor. In this article I suggest distinguishing between the Chavista social movement and Chávez’s successors in government.

Hugo Chávez, leader of a failed military coup in 1992, secured an electoral landslide in 1998, nine years after the Caracazo, an explosive urban uprising against neoliberal reforms and corrupt “pacted democracy”. He had captured the hearts and minds of millions of poor and marginalised Venezuelans. Chávez successfully oversaw a constitutional referendum in 1999, rebranding Venezuela a “Bolivarian Republic”, enshrining various new economic rights, and promoting participatory and direct democracy. In 2001, Chávez shifted from political reformism into a radical socioeconomic programme, taking the nation’s oil under state control, and sending healthcare and education misiones (“missions”) into the poorest barrios. This proved too much for the traditional establishment, but a 2002 coup collapsed after 48 hours, and they had instead to resort to various forms of sabotage.

From this potted political history, readers may wonder if Chávez wasn’t just another classic Latin American populist caudillo, or populist military leader. At state level, Chávez’s movement has often resorted to riding on a template state populism. But instead of simply dismissing him as standard fare, we should see recent Venezuelan history as a crucial case study for anyone who believes in the need for radical social change from below and wants to learn how movements have operated in a position of active leadership – for Chávez inspired an authentic political movement from below. Like the Bolsheviks in 1917, the Chavistas have had to work within a hostile global environment. Whereas social movements elsewhere can debate theory for decades, the two main Chavista factions identified by political scientist Steve Ellner – reform-consolidators and radical conflict-escalators – have, in power, lacked the time to sit down and debate a detailed roadmap.

The charismatic Chávez used his radio show, Aló Presidente, for sympathetic dialogues with the Venezuelan masses. He famously declared that he wouldn’t hesitate to steal to feed his family. But Chavismo went beyond its namesake’s top-down patronage of the poor: Bolivarianismo has popular emancipation at its core. Alongside socialist solidarity and anti-imperialism, it advocates protagonismo (“protagonism”: urging workers to see themselves as active participants), the seeds of a politics ‘from below’. Chavismo advocates ‘21st century socialism’, a postmodern socialist ideology with independent theorists. Indeed, field research by Cristóbal Ramirez discovered many democratic, Chavismo-aligned grassroots groups, committed to disseminating and implementing Bolivarian values, while independent of state funding. Many are pre-Chávez counter-hegemonic social movements like the Communists, Christian leftists, LGBT activists and working-class women’s organisations. This grassroots activism represents a “slow-burning” (Richard Gott’s term) Bolivarian Revolution. As Joris Luyendijk has pointed out, the news media feeds us the exceptional events and ignores the everyday reality.

But what has gone wrong, and why? Many right-wing critiques attack the regime’s foundations in socialist ideology itself – yet nearby Bolivia’s socialist government has not experienced the same problems. others point, often justifiably, to the particular problems of statism and oil dependency. Chávez’s government failed to properly diversify Venezuela’s economy during the oil boom years 2000-2008, leaving it with ‘Dutch disease’ – a particularly painful condition during the current oil price crash. This ongoing economic crisis has undermined the post-Chávez administration’s reputation. Moreover, the state has increasingly fallen back on wilful political repression. With mishaps and outright crimes from the PSUV administration, Venezuelans increasingly regard the Chavistas as a corrupt ruling cabal. This is the fault of the Chavistas at the top (with a more than a little help from the old establishment), but not the Chavista social movements at the bottom.

Hence, left-wing critiques of Chavismo tend to denigrate the state, not the movement. Socialist academic Diana Raby found a contradiction in Bolivarianismo between popular democracy and the dependency on a powerful central state to preserve national sovereignty and intervene in the economy. Political scientist Manuel Larrabure made a similar point, in Marxist terms, pointing to a “central paradox” between “human development through praxis” (e.g. promoting emancipation from below) and reliance on a state which continues to embody capitalist “class relations” – i.e., which represents an authority over, and external to, the working class itself. In other words, there was always a latent tension between Chávez’s social movement, and Chávez’s state. Ramirez suggested that the Chávez government, with traditional elites excluded from state power, could lead us to consider whether a state can be counter-hegemonic and part of a “resistance movement”. According to researcher Anna Siverskog, grassroots anarchist activists within Venezuela say “no”: the Chavista state is, well, a state; inherently bureaucratic and oppressive. 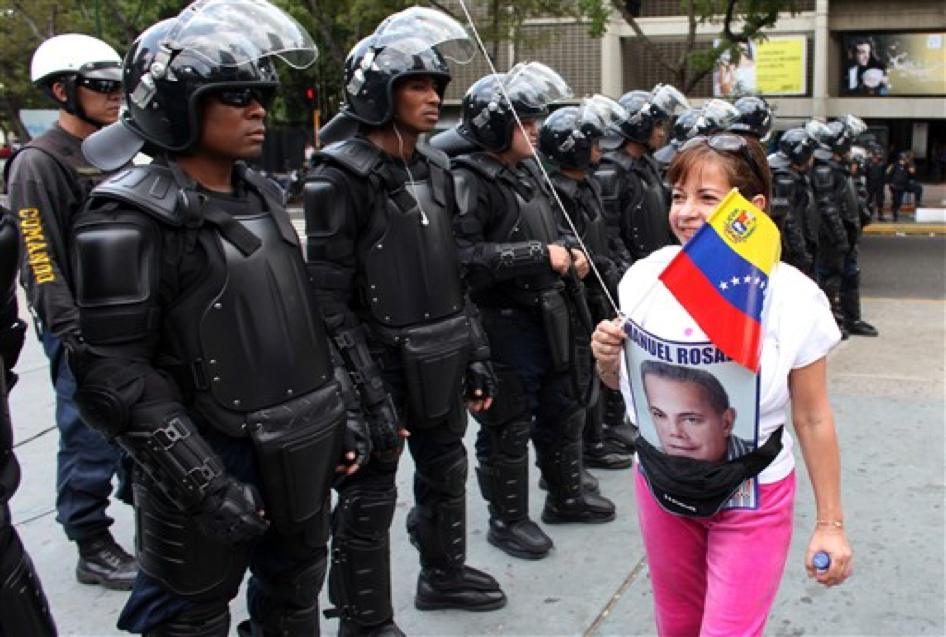 Spot the social movement: an anti-Chávez civilian protestor walks by the armed police of Chávez’s state.

Could Chávez’s own social movements take a similar line? Former supporters have done so: “these guys ruined everything that Chávez left behind!”, said many voters, in December, while simultaneously saying “if they don’t deliver, we’ll vote them out, too!”, of the opposition. Wasn’t popular accountability a key aim of Bolivarianismo? Francisco Toro, longstanding Chávez critic, described the recent opposition victory as a result of grassroots mobilisations against state intimidation and fraud. He previously wrote that the opposition has committed to “institutionalising the revolution’s social advances while sweeping away its legacy of political sectarianism, ideological rigidity and mismanagement.” Does this necessarily conflict with the aims of Bolivarianismo? Perhaps grassroots Chavistas need to rediscover ‘authentic’ Chavismo, focusing not on propping up state officials, but on the economic and political rights Chávez urged the people to demand. This would be something worth universalising: Venezuela’s situation resembles the gulf between what South Africa’s African National Congress movement once stood for, and what the current ANC state is doing.

For socialists, these Venezuelan dilemmas are pertinent. Marx once wrote that “capital[ism] comes dripping from head to foot, from every pore, with blood and dirt”. We cannot expect that defeating the cruellest aspects of modern capitalism will be painless. But we need to be able to distinguish between the side-effects of genuine popular resistance, and the unnecessary harm wrought by corrupt leaders. President Maduro attempted to deploy the solidaristic discourse of Chavismo prior to the election, stating that Chávez “created us with the values of loyalty and sacrifice”. Maduro wants Chavistas to assume that this means supporting the PSUV establishment. But maybe it does not have to be that way. As Chávez once said, “the only way to save the world is through socialism, but a socialism that exists within a democracy.” In a democracy, leaders respond to the popular will, and Chávez’s successors in the grassroots ought to remind Chávez’s successors in government of this important fact.