Time Ticks On in Mali 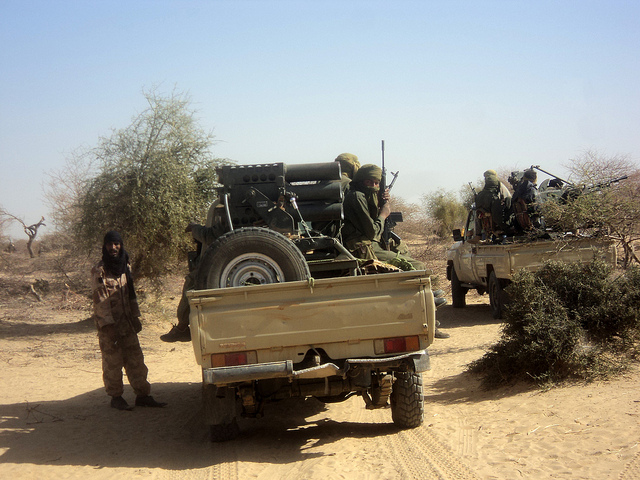 In a rare display of decisiveness by the French President, what was undoubtedly hoped to be a quick and effective military operation to buy time for the eventual deployment of regional African ECOWAS (Economic Community of West African States) might now turn into a drawn-out military operation.

Looking back, the sudden escalation of the situation in Mali had been on its way for a long time. The country, that had been considered an African model democracy since its first democratic elections in 1992, has been politically unstable since a military coup led by General Sano in March 2012 overthrew its government. Yet even before the coup, a loss of state control in the North of the country could be observed. The nomadic tribe of the Tuareg began their insurgency over the north of the land early in the 1990s. Formed like a tilted hourglass, Mali’s North is a vast, deserted desert, the size of Belgium and France combined. While this did not call for immediate attention of the international community, their sudden move to the South raised alarm bells.

An influx of arms made possible after the collapse of Libya opened arms depots to local militants, and is arguably one of the reasons for their increasing confidence. What has actually incited French action is the Tuareg’s alliance with militant Islamists linked to Al-Quaeda in the Islamic Mahgreb (AQIM) and the fear that an area as deserted as the north of Mali could be turned into another sanctuary for Al-Quaeda.

Now the sudden push southward has caused France to take the leading role: 1,800 troops are currently deployed over there, with another 700 scheduled to follow. With over 30,000 people already displaced due to the fighting and an ongoing hostage crisis in Algeria demanding the end of the Mali intervention, President Hollande is under a pressure.

This is not how it was supposed to be. Under the UN Security Council resolution 2085 troops provided by ECOWAS and trained by the European Union were supposed to claim back the north of the country this autumn, with French forces acting in an advisory capacity and America providing intelligence, air transport and financing. France was always envisaged to have a civilian role leaving the fighting to ECOWAS and the Malian army. While the entire African region, including Algeria, as well as UN Security Council, support the French intervention, the fear that France’s role is overreaching is growing.

The question remains whether France will be alone in this fight. Mr. Cameron told Parliament that “those who believe that there is a terrorist, extremist Al Qaeda problem in parts of North Africa, but that it is a problem for those places and we can somehow back off and ignore it, are profoundly wrong.” But while international support in the form of providing intelligence and equipment rolled on at the end of last week, the major international powers, above all the US, each have their own reasons to be reluctant to literally set foot into the desert.

As the New York Times reported, Valéry Giscard d’Estaing, the former French president, warned Mr. Hollande of “the danger of a military operation without a clear enemy, with the risk of civilians that is bound to engender hostility among the citizens.” Some of Hollande’s critics are already speaking of Hollande’s ‘Sahelistan.’ It will be difficult to drive militant islamists out of the North. Many of the rebels are well-experienced Iraq or Afghanistan veterans who know the terrain they are fighting on.

The true challenge of Mali is only yet to come. With the military operation already being successful in halting the rebels’ advance to the south, it will be another issue to rescue Mali from its political mess. After the civilian prime minister was sacked last month by General Sano, Mr.Traoré in his role is too weak to force elections. Protests have started in its capital Bamako.

Mali is only likely to succeed if it undergoes drastic changes. Governmental institutions and their legitimacy need to be restored. Diplomacy needs to be employed to distance the Tuareg from the Jihadists, so that Mali can be reconfigured and Tuareg autonomy established in the North, something that French officials regard as vital for creating stability in the area. As Reuters reported, Hollande declared on Saturday that France’s mission in Mali will last as long as necessary: “people often ask how long this will last. I reply, the time it takes. The time it takes to vanquish terrorism in the area.” If Mr. Hollande is true to his word, he is in it for the long run.