The truth of Brazilian presidential politics 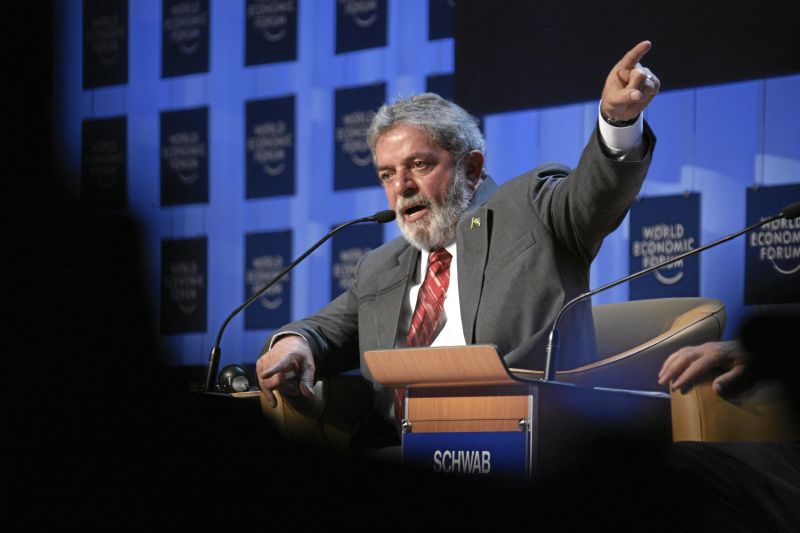 Luiz Inácio “Lula” da Silva has been a popular president.

Imagine the following scenario: you, sitting on a Brazilian beach, sipping some cold “caipirinha” under the radiant sun… All is perfect, all is peaceful. Commonly known as the land of sunshine, carnival and football (among other things), Brazil seems to be a piece of heaven on Earth. But before you go on to dreaming of coconut trees, time to face reality: not all that glitters is gold. The problem with stereotypical generalizations is that they are excruciatingly simplistic. Over the course of its Republican history, Brazil has not only faced twenty-one years of military regime (1964–1985) but also the most various facets of political leadership.

On 3rd October 2010, Brazilians all over the country will choose their next president. Among the candidates (twelve in total) are current president Luiz Inácio “Lula” da Silva’s protégé, Dilma Rousseff (Workers’ Party, PT) and her closest opponent, José Serra (Brazilian Social Democracy Party, PSDB). While Dilma spent five years working for Lula as his Chief of Staff (having been his Minister for Mining and Energy), Serra was both Mayor and Governor of São Paulo State during the eight years of Lula’s administration.

This year’s election results promise to be historic, and various debates have already been taking place over the past few months in order to help the population decide who the next President of the country will be. However, within this electioneering business lies one of the most controversial topics of Brazilian political campaigning: that of media manipulation.

Throughout the twenty-one-year-long military regime mentioned earlier numerous attempts to control public opinion took place in Brazil. The institution of the “AI 5” (or Institutional Act Number Five), for one, was a decree issued by President Artur da Costa e Silva in 1968 which – among other things – established censorship to any type of media judged by the President’s standards to be subversive or anti-government.

According to Le Monde Diplomatique journalist Dario Pignotti, José Sarney (first civilian president after the 1964 coup d’état) obstructed all reformist initiatives of media ownership structures and for the right to information, in 1985, alongside the Marinho family (owners of “Rede Globo” – the largest commercial television network in Latin America and fourth in the world, behind the American giants).

This censorship was extended and infiltrated the field of election coverage over the years. Brazilian blogger and journalist Marcelo Salles reminds everyone of the historical 1989 debate between Lula and Fernando Collor, which was edited in a biased fashion and aired by Rede Globo so as to emphasize Collor’s best moments and Lula’s worst. Such handling of media content led to Lula’s loss in electorate and subsequent defeat to Collor, who was befriended with Roberto Marinho, president and founder of the TV network (for more info on this event, be sure to watch the documentary “Beyond Citizen Kane”).

Marcelo Salles goes on to point out other cases of media manipulation, such as the “Lunus” case, in which illegal wiretapping, a dossier and the political manipulation of the Federal Police led Roseana Sarney to renounce her Presidential candidacy in 2002. This case was widely – and one-sidedly – spread by the media.

Other intellectuals, such as renowned media scholar Venício Artur de Lima, have said that the image that Rede Globo built for Collor was that of a “young man who was willing to change the country”. In his book “Media and Politics”, Lima draws our attention to an obvious – but underestimated – truth: that of a “scenario of political representation”, in which the image of Collor was portrayed not only on political journalism-related TV shows, but on entertainment shows and the so-called soap operas as well.

Now before you become outraged and decide never to visit Brazil as a sign of protest to its doubtful media background, one must point out the positives of the current media situation in the country.

In an interview carried out by Communicare Magazine this past September, Lima highlights that Lula was victorious in 2006 despite the dominant media’s opposition towards him, and suggested that the Internet played (and is playing still) a decisive role in altering the importance and power of the mass media. As reported in his 2006 research (conducted on behalf of the Perseu Abramo Foundation), the dominant media was keeping certain bits of information on the down-low during the transition between the first and second election rounds, which social movement leaders were only able to access because of the internet. This stirred them to divulge such information and prevent Lula’s opposition (and media favourite) at the time, Geraldo Alckmin (PSDB), from winning the elections.

All in all, progress is being made. There is an ongoing “battle” between Lula and his “followers” and Rede Globo: the former try to promote a discussion about the fallibility of the communication process within the media, and the latter try to prove him wrong by cutting off such attempts and not giving them much media coverage. As a result, minor groups are marginalized and end up not participating in what should be a democratic process of debate and possible negotiating.

An example of this, recalls Dario Pignotti, was Globo’s attempt to boycott the National Conference of Communication, convened by President Lula in early 2009, during the World Social Forum in Belém, Brazil. He says that “this simple act led to over ten thousand people gathering and organizing assemblies all over the country to discuss the future of Communications and come up with motions to be presented at the Conference mentioned above (which took place in November 2009, in Brasília)”. The problem with Globo’s attempt to delegitimize President Lula’s effort is that he has been promoting a pedagogically healthy debate on this matter across Brazilian society, and it seems to be working so far. Pignotti reiterates that by means of constant direct dialogue with the population, he has established a “trust contract” with the population, who believes in him not only because he “speaks the poor people’s language”, but because those in uttermost need were in fact taken care of through his social policies over the years – his “Bolsa Família project” has already proved beneficial to approximately 45 million Brazilian citizens.

So where does that leave us? Probably not at some beach on the coast of the most peaceful tropical country in the world. The fact remains that Brazil still has a long way to go in terms of building a just and democratic society, and these elections come at a time in which progress has in fact been made in the area of media transparency. Presently, certain organisations such as the government-sponsored Brazilian Communications Company (EBC), Altercom and other types of alternative media are trying hard to fight the main media institutions and encouraging exchange and fairness of information. Regardless of who wins the 2010 Presidential elections, one can only hope that Lula’s successor will take this media debate into account and continue promoting fairness, the right to information and non-corporativism. It’s about time someone did.