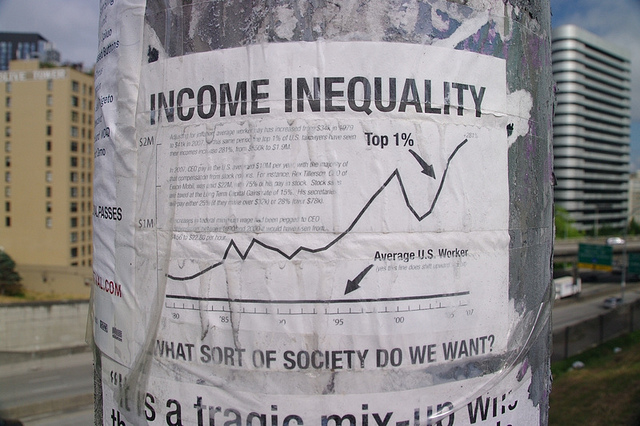 It is important to place this scandal within a context of rising income inequality.

‘Panama Papers’ refers to a massive data cache of 11 million documents from the Panamanian law firm Mossack Fonseca: the biggest data leak in history. The papers were turned over to the International Consortium of Investigative Journalists, with at least 107 media organisations worldwide now trawling them. Mossack Fonseca is in the business of helping the wealthy to protect their assets, specialising in the creation of “shell companies”. Simply put, a shell company allows the owner of an asset to pretend that they do not own it – the company conducts no business but can be listed as the owner of an asset (Vox explains this phenomenon in an accessible manner). This concealment can be for privacy purposes, or for malicious deception. It is apparent that Mossack Fonseca’s services are most often bought for the purposes of tax avoidance – the broad, grey area between reasonable tax minimalisation and malicious tax evasion. The Panama Papers implicate many public figures around the world in this practice of offshore asset holding, albeit in varying forms and to varying degrees.

There are four key (overlapping) problems stemming from the ‘Panama Papers’ scandal (and from offshore havens in general). Firstly, conflicts of interest: the last few years have seen much discussion at national and international level about the need to clamp down on tax avoidance, but how can we trust that our leaders will take our concerns seriously if they (and their families) have personal stakes in these tax havens? Secondly, concealment and corruption: as well as providing relief from foreign rates of taxation, these offshore havens provide a source of anonymity for those who need it – which includes embezzlers and launderers. Thirdly, the question of morality versus legality: it is certainly possible to use an offshore fund in a legal manner, but is it moral and will it undermine societies? And fourthly, the problem of inequality and polarisation, exemplified in the frustration shown towards offshore finance.

The current political scandal is not simply about vilifying the wealthy. David Cameron’s familial wealth may be a source of disdain for some, but it is not going to trigger his resignation itself. Rather, the problem is one of conflicts of interest. It does not make much sense to claim, in a democracy, that the personal assets of politicians are a “private matter” (indeed, it is already supposed to be established practice that politicians declare and forego their personal financial interests upon taking office), because we as citizens need to know that our politicians are not using their power for personal interests. It was this which led to the resignation of Sigmundur Davíð Gunnlaugsson as Iceland’s Prime Minister on Tuesday, rather than his financial practices themselves, after it emerged that he had failed to declare an interest in a company his wife bought from him when he took office. Moreover, at a time when global leaders are supposed to be collaborating to restrict tax avoidance, trust will be undermined by the revelation that many of them may have (or even have had!) personal financial interests offshore.

Then, there is also the link between offshore management and downright corruption. Henry Zeffman’s excellent reflection notes that we should at least be grateful Britain’s scandal is “about the legal use of an offshore fund”, whereas elsewhere we are looking at “the systematic enrichment of individuals close to corrupt rulers”. Cameron’s apparently ‘clean’ (in a legal sense) participation seems like nothing much compared to a massive network of apparent corruption whereby Vladimir Putin’s closest allies have acquired $2 billion worth of assets via ‘inexplicable’ loans from Russia’s state bank. The Kremlin has simply dismissed the story, rather unconvincingly, as Western “Putinphobia”. Patrick Cockburn, Middle East expert, related the Panama Paper revelations to the rampant corruption in that region, which has long undermined Iraq’s state-building project and left the door open to a group like ISIS. Indeed, a complex global financial system, allowing people to ‘foreignise’ their money and assets, and shroud them in anonymity by registering them offshore via ‘shell companies’, is a key enabler of embezzlement, the theft of government money, by corrupt officials. Without detracting from the many potential reasons why #CameronMustGo, the Panama Papers will reveal worse about leaders elsewhere and their serious corruption.

Now, the question of tax justice. Tax avoidance constitutes the legal ‘grey area’ between tax minimalisation (legally ensuring one is not overpaying), and tax evasion (illegally failing to fulfil one’s tax obligations). ‘Tax justice’ has become a key theme of politics everywhere: ‘progressive taxation’ (whereby the highest earnings of the rich are taxed at a higher rate than the highest earnings of lower earners, so that some of their superior wealth is redistributed downwards through government spending) is under threat if those higher tax rates are being bypassed through tax avoidance. As well as redistribution, there is the fact that people who do get rich depend on public spending for their wealth (on security and police to protect their property; on the infrastructure that makes the economy function; on the wages of the public employees who buy their products; etc), and therefore they are obliged to contribute their share to the public purse. Austerity policies have been implemented in Europe, often alongside a slogan like George Osborne’s “we are all in this together”, but people feel cheated when they learn that many wealthy people are actively seeking to avoid contributing to the nation’s finances through the domestic tax system. And in the developing world, those lucky enough to have become wealthy are depriving their fellow citizens of development if they are hiding their wealth offshore instead of providing a fair amount of tax to fund infrastructure and services.

But even more crucial, and often overlooked by many who want to justify these offshore practices, is not just about tax justice, but about increasing asymmetry and polarisation. A very baffled-looking tax lawyer maintained on BBC News that offshore investments are increasingly common in “the globalised world that we live in”. But common for whom? These offshore funds may be common usage for people who have capital and the means to mobilise it – but this is a situation which certainly does not apply to everyone. You might argue that many common pension funds used by ordinary people use offshore strategies – but how many ordinary people scrutinise what their pension fund accountants are doing with their money? The specific workings of financial globalisation are alien to most people. A key reason why so many feel angry (or even just frustrated) about these revelations is therefore because it makes them feel even more alienated from the elite. The aforementioned tax lawyer claimed that the reason people use offshore bases is because of the ease of setting up a fund there, rather than for avoiding tax: but, aside from the fact that this “ease” stems from the lack of regulations and transparency there (which creates all the problems listed above), the majority of people are hardly going to feel comforted by the words of a tax lawyer they can’t afford to hire, discussing a financial strategy they don’t have the wealth to adopt (Ian Cameron’s Blairmore Holdings required $100,000 minimum investment from clients). The fact that manoeuvring around offshore finance is something some people do regularly, making new profits out of their existing wealth, while for others the practice of making huge investments in offshore investment funds is an indulgence which will never be within their grasp, is a pretty good demonstration of the steady and ongoing class polarisation taking place globally – dividing every society into ‘baristas and barristers’, ‘slums and skyscrapers’.

To summarise this dilemma into a couple of questions: how can we expect ordinary people, struggling to make a living let alone understand global finance, to trust these elites and experts, now so distant from them, who dismissively insist that the practice of offshore asset management is fine, fair, and above board? And why should they not be angered by these practices, however legal, which are a most frustrating demonstration of how unequal society is becoming? Of course, some people don’t care much about inequality, but most people do, and in the context of concerns about inequality, and a year in which “the 1%” reach the level of owning more wealth than the 99%, the furore over the Panama Paper revelations make a lot more sense.