The Aftermath of Hurricane Sandy 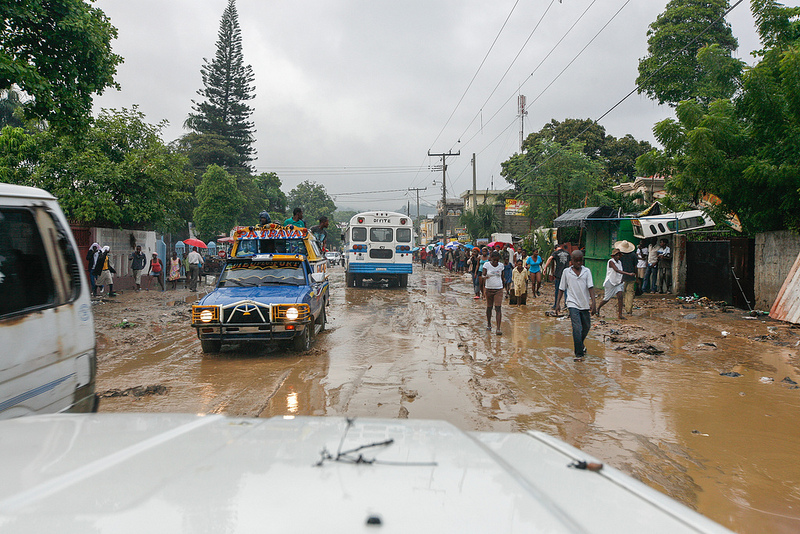 The world’s media has recently been riveted by both the political and natural landscape in the United States of America as it has experienced not only one of the closest contested elections in modern times, but also Hurricane Sandy, the storm that ravaged the country’s eastern seaboard. It may come as a surprise to hear that Sandy’s trail of destruction was much wider than the media suggests, as it tore through the Caribbean on its route to North America on October 30th.

Across the east coast of America, Sandy, which was later downscaled to a “tropical storm,” uprooted lamp-posts and traffic lights, flooded shopping malls, and left many, even in the metropolis of Manhattan, without electricity or a home. New York City Mayor, Michael Bloomberg, has recently estimated that between 30–40,000 people have lost their homes, whilst over 100 people have lost their lives across the US.

Whilst Sandy was a storm of unprecedented scale for the USA, and for some commentators was crucial in Obama’s success in the Presidential Election, it was a natural disaster all too familiar to some Caribbean islands. The ‘superstorm’ killed 69 people across the Caribbean as it roared towards North America. The Bahamas, Haiti, Cuba, Jamaica and the Dominican Republic were all caught in the storm.

Haiti has had its fair share of natural disasters, this year in particular having brought not only a drought throughout June and July, but also Hurricane Isaac in August. Hurricane Sandy adds another setback to the country’s route to recovery after the 2010 earthquake, which left 25,000 dead and another 350,000 without a home in the capital, Port-au-Prince. The ensuing outbreak of cholera due to a lack of infrastructure, most notably the absence of clean water, has killed 7,000 since 2010.

Aid agencies have warned of another humanitarian disaster in the region. The death toll in Haiti following Sandy has reached 54, with 20 additional people are still unaccounted for. The 24 hours of rain led to 20 inches of flooding which has swept away temporary camps housing 100,000 of those who lost their homes in 2010.

The country faces severe food shortages as approximately 70% of its agricultural sector, which includes bananas, plantains and maize, has been destroyed. The Haitian government has estimated the cost of damage to be in the region of 245 million and has called for international assistance. The Prime Minister Laurent Lamothe has described the incident as a “disaster of major proportions.” Johan Peleman, head of the UN Coordination of Humanitarian Affairs, commented that Hait is “going to face in the next couple of months very serious problems of malnutrition and food insecurity.” The World Food Programme puts the estimate of food insecurity at nearly two million people.

Joan Arnan, the head of Medicins Sans Frontières’ mission in Haiti, says that there will long term damage from Sandy, as “there’ll still be cholera and misery in this country. The problem here is structural.” Without more support from the international community, he regrets “this situation will repeat itself every time there is a big storm.”

The UN acted quickly, allocating 5mllion to Cuba and 4million to Haiti through the Central Emergency Response Fund (CERF). The UN food relief agency and Haitian Government authorities are seeking 74 million over the next 12 months to help the Haitian agricultural sector make a full recovery from the storm.

On the night of Halloween, the Red Cross also launched an appeal for donations to provide food, water, healthcare and shelter across all affected countries. They have helped 11,000 families with access to emergency supplies in Haiti and are continuing to provide first aid and emergency shelter to Cuba. They have also provided shelter to nearly 11,000 people across the United States so far.

In Cuba, the situation is similar. Eleven people have died, whilst over three million have been adversely affected by destroyed buildings and loss of power. On the 8th November the country received 40 tons of UN humanitarian assistance, including waterproofed canvas, water storage tanks, water purification tablets and hygiene, school and cooking kits. Barbara Pesce Monteiro, UN Resident Coordinator in Cuba, said the supplies meet the “immediate needs of [the] population,” but that it was the only beginning of a campaign to support the city worst affected, Santiago de Cuba, and the surrounding regions in the next few months.

As time passes, the plight of these impoverished Caribbean countries gradually fades from the headlines. What has become apparent is that Sandy has continued in the long running tradition of natural disasters; to hit where it hurts the most. The impoverished Caribbean countries did not experience a storm any different to those in North America. However, it is almost guaranteed that the homeless in the Caribbean have a slower road to recovery than those in the USA. The lack of infrastructure and resources to effectively rebuild communities and homes leaves a precarious future for many Caribbean communities including the threat of more extreme weather, food shortages and disease.

Whilst America enjoys a post-election frenzy and directs much needed aid to its own residents, should the global community not direct its attention to countries whom otherwise are floundering in a sea of problems?