In 1978 the Afghan Communists, who were considered politically backwards by the Soviets, seized power in a military coup. The Soviet Union had a long-standing relationship with Afghanistan, on their southern border: considerable economic development in Afghanistan had been driven by Soviet input, as Afghanistan was the first country to develop friendly relations with the Bolsheviks. In 1979, the Soviets intervened to change the regime, removing Prime Minister Amin, who had been conducting government in blatantly Stalinist fashion (liquidating his rival the President, and large numbers of Afghan civilians). The Soviets installed a more civilised leader, Babrak Karmal. Then they spent ten years in Afghanistan, maintaining the Communist Party in power, attempting to develop the country and trying to build up the government to the point where they could leave. This series of events was mysterious to the West at the time, and remains mysterious now.

Linger for a moment on one arresting scene from the Mike Nichols and Aaron Sorkin version of events, from their 2007 film Charlie Wilson’s War (see clip). A comic duo of fumbling Afghan holy warriors innocently test their new toy, one of the ‘Stinger’ rocket launchers provided by the CIA, thanks to Congressman Wilson, for the insurgency against the Soviet empire: the callous and complacent Russian helicopter pilots, having just gunned down some Afghan villagers, chat about women over the intercom, blissfully unaware that a guided missile is gracefully curving through the air behind them. A moment later, the evil Russkis explode, and the rustic Afghans celebrate their magical technological deliverance. Perhaps channelling the effective combination of helicopters and Wagner in Apocalypse Now, the scene is accompanied by a disco beat adaptation of the ‘And he shall purify’ chorus from Handel’s Messiah.

Hollywood and history may have a strange relationship in general, but the film’s attitude is representative of how the West interprets this episode in recent history. Enter Sir Rodric Braithwaite, British ambassador to Russia from 1988 to 1992, subsequently chairman of the Joint Intelligence Committee, author of acclaimed studies of the deep Nazi incursion into Russia (‘Moscow 1941’) and of Russia’s transition from the Soviet era (‘Moscow River’). Sir Rodric spoke at the Durham Book Festival on the topic of his latest book, ‘Afgantsy: The Russians in Afghanistan 1979–89’. The title is a transliteration of the Russian word “афганцы”, coined to refer to the veterans of the long and difficult Afghan war: the book attempts to convey the Russian point of view, in particular the ordinary Russian soldier’s point of view. In other words, it occupies the space inside that helicopter, at the other end of the missile, and it dares to sympathise with the enemy, establishing a distance from the Cold War mythology and propaganda that still distorts our thinking. 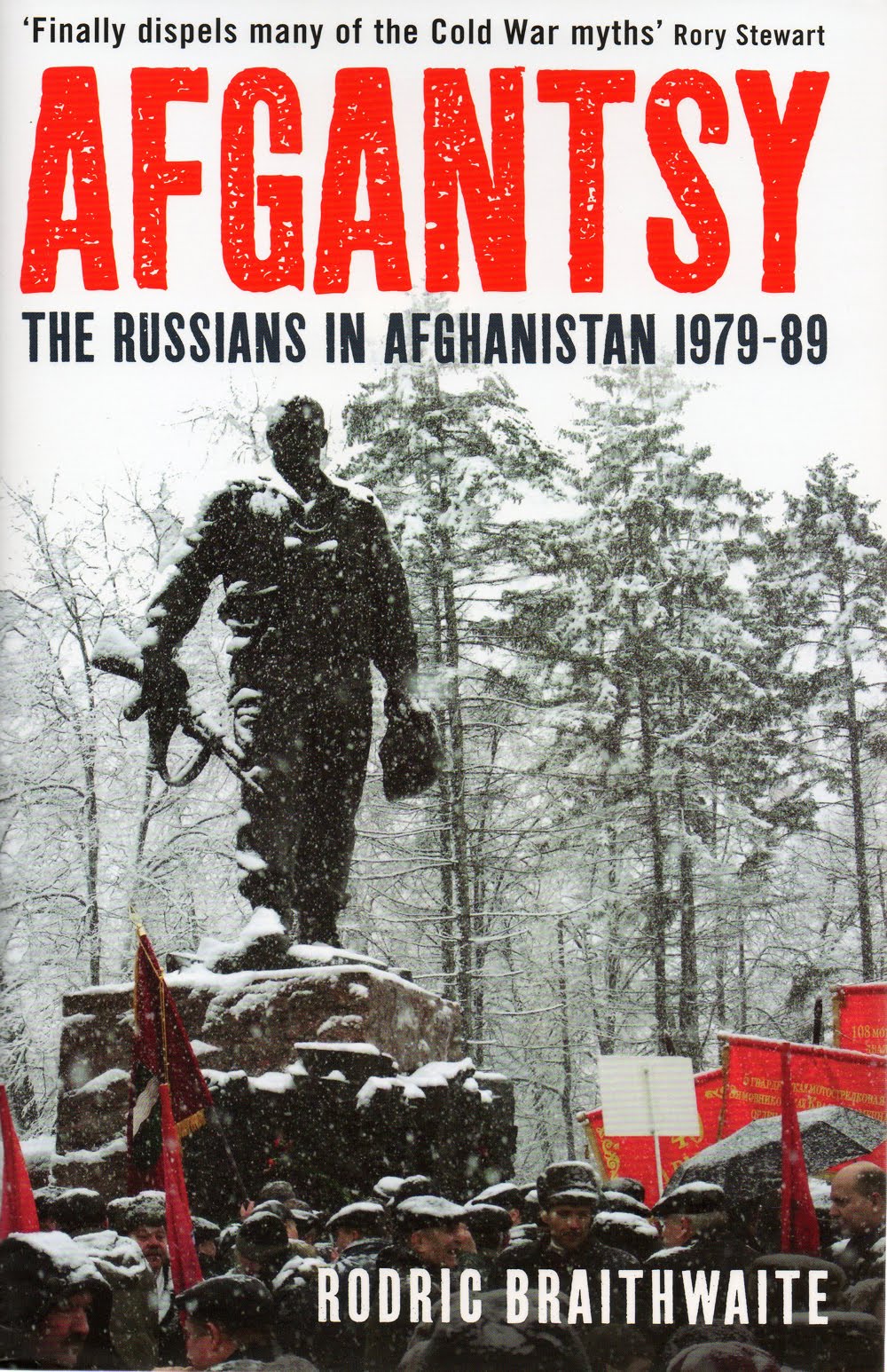 The Nichols-Sorkin fetish of the Stinger missile is partly a matter of the hagiography of Charlie Wilson – the Lawrence of Arabia of our times – but in addition it takes its place in a view of the Russian invasion as a monstrous imperial transgression. The Russians were there, we thought, to make Afghanistan the sixteenth Soviet republic, to access the Indian Ocean, to impose godless Communism on the pious and conservative population. Yet the Afghan people rose up against the Russians, in spite of a uniquely ruthless and brutal treatment: with the help of the Stingers, they drove the empire back, and sent it home to die. The likes of Sir Rodric wrote this script, in so far as it evolved from the active work of Western propaganda. In fact, the Stingers had no effect on the Russian strategy: Gorbachev decided to pull out a year before the first Stinger was fired in September 1986. Their effect on Russian tactics was to drive the aircraft higher, out of range, so that bombing became less discriminate, and more civilians died. In spite of the CIA’s efforts to buy back the Stingers for twice their original value, somewhere between two and four hundred are still at large.

More disturbing than the absence of history is the absence of human sympathy for the exploded Afgantsy. Sir Rodric’s daughter tells him that he over-uses the word ‘disgrace’, in much the same way that Noam Chomsky’s dentist tells him not to grind his teeth when he reads The New York Times. That Handel-helicopter scene is, in fact, a disgrace: the Russian soldiers are portrayed as inhuman, merely evil, and their death is celebrated in jingoistic fashion. At any rate, before the Stingers the helicopters were not invulnerable, as a well-placed volley of machine gun fire could bring one down. So even an inhuman Russian helicopter pilot in the pre-Stinger era would have been paying close attention to the proximity of death, as soldier do.

At events like the Durham Book Festival, as in the questions I put to Sir Rodric beforehand, the hottest topic is usually our own military affair in Afghanistan. It’s an obvious parallel, and one well worth drawing, but it’s not the focus of ‘Afgantsy’. As well as the documenting and clarification of recent history, the book is a meditation on the horror of war and on the harshness of the Russian fate. The Russian veterans of Afghanistan returned to another kind of “disgrace”, like the American Vietnam veterans: the “considerable injustice” of the civilian attitude to those soldiers. Their grandfathers had fought as heroes in the ‘Great Patriotic War’, so essential to contemporary Russian national pride, while the Afgantsy have found themselves the focus of critical thoughts and feelings from Russians ashamed of the Soviet empire’s dying fall in Afghanistan. The Vietnam veterans, however, returned to a country that could provide for them. The Afgantsy returned to a bankrupt country, and had to struggle with joblessness and poverty and the neglect of their state, in addition to all the usual challenges of adapting to civilian normality and coping with post-traumatic stress. 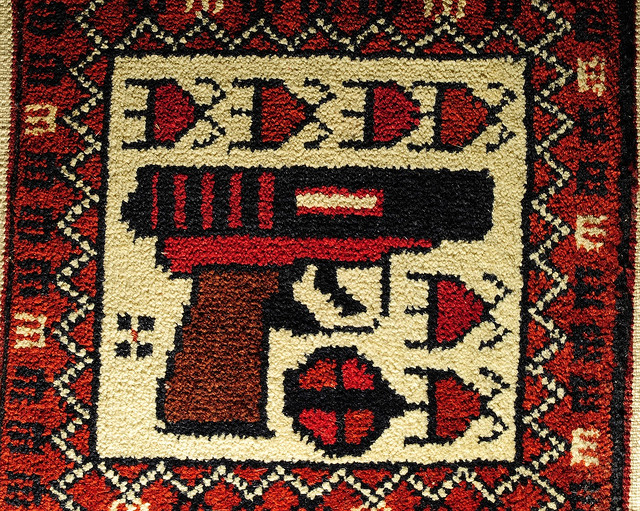 Afghan rug from during the nine-year war with the USSR

Just what is it like to be conscripted into what you believed to be a noble humanitarian war effort (the Russians, like us, thought they were there to build schools, liberate women, win hearts and minds), to find yourself fighting with rudimentary WWII equipment in an excruciatingly harsh war, to end up transgressing civilian moral norms in the way that soldiers do, and to return in shame and calumny to a Russia itself undergoing the traumatic transition from the Soviet era, amid vast poverty and ruin? Sir Rodric is humble on this question: he will never know what it is like, but he has made an effort to interview those who have lived through it and to pass on the story to us in his book.

At the close of the Book Festival discussion, Sir Rodric is asked about his fascination with the Russian point of view. In ‘Afgantsy’, there is an interesting aside in the account of the Afghan Communist government’s requests for Russian troops in 1978. The Russian ambassador in Kabul, Puzanov, was one of those responsible for passing on these requests. “As often happens, the people on the spot were sometimes more sympathetic to their clients’ predicament than to the views of their principals”. Was it in his role as British ambassador in Moscow that Sir Rodric developed his sympathies with the Russian point of view? Although there is always a danger, in that kind of job, of “going native”, Sir Rodric thinks the fascination with Russia runs deeper, and observes it in other British people who come to have some connection to the country. For one thing, the country has an epic scale (it is roughly twice the size of the United States). Yet there is also an intriguing semi-alien quality, sometimes expressed in the idea that Russia is half Eastern and half Western (these controversial terms are inadequate, but stubborn). Wary of intruding upon political correctness, Sir Rodric’s phrasing is that Russia is “unusual for a European country”.

For a buttoned-up Brit, there was something about getting to know a country where vodka flows and women you don’t know well wrap their arms around you. This comment is enough to earn Sir Rodric his final round of applause, but afterwards he awkwardly cuts in. The absence of grace in a diplomat of this calibre is an indication that he really wants to say something. It’s a simple thought: Russians are human beings, and their differences from Westerners are less fundamental than their similarities. It’s the assumption that drives ‘Afgantsy’. It shouldn’t be a radical assumption, but once you’ve been initiated you can see that it is.