Sexual violence as a weapon of war 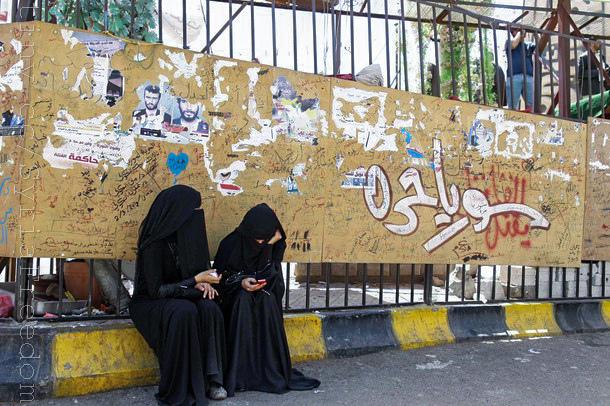 Women sit next to graffiti that reads “Syria is free” at Taghyeer Square.

In Syria the death toll increases every day as the civil war rages on. At the same time, another tragic statistic is rising: the number of victims of sexual violence. Human Rights Watch (HRW) released a report last year on the Syrian government’s detention facilities, or more descriptively, torture centers. Through extensive research HRW were able to document the wide range of torture methods used at these facilities. Among them were “rape, penetration with objects, sexual groping, prolonged nudity, and electro shock and beatings to genitalia”.

The use of sexual violence is not only to be found behind closed doors; it has become a part of the conflict as a whole. Rape is being used during home raids and residential sweeps. Perpetrators force family members to watch while the assaults are carried out. Lauren Wolfe, the director of the newly-founded initiative Women Under Siege, told CNN that there had been many examples of women and girls being raped at checkpoints. In one account a group of soldiers forced a man to choose between leaving one of his daughters behind or watching his wife and all his children being shot. He left his daughter.

Women Under Siege is collecting reports of sexual violence in Syria, and continuously updating a crowd map online. From their data it seems that 61 percent of the assaults have been carried out by government forces alone and another 6 percent with the help of the pro-government civilians. The remaining percent indicates that oppositional groups are also responsible for sexual assaults, although Wolfe does not clearly state this. It is worth noting that HRW have found evidence of torture facilities run by the opposition, although on a smaller scale.

Sexual violence is not simply a terrible side effect of the anarchic nature of war – it is a weapon of war in itself. This weapon destroys lives and communities. Suicides, stigmatisation and unwanted pregnancies are only a few examples of its consequences. The central role of sexual violence requires it be grouped with cluster munitions and chemical weapons as a weapon of war that the international community holds to be completely unacceptable. To achieve this it must be recognised formally in international law and its application, as well as socially through political focus and action.

Two conflicts that took place during the 1990s have been especially important for the development of international law on sexual violence: the civil war in Rwanda and the wars in the former Yugoslavia. During these conflicts sexual violence was used extensively and systematically. In Rwanda it has been estimated that up to half a million women were raped, and in Yugoslavia most estimates range from 20,000 to 50,000. These conflicts had torn the countries to pieces, leaving the domestic courts unable to handle the necessary legal proceedings. Consequently, The United Nations established ad hoc tribunals to handle the trials. Together the International Criminal Tribunal for the former Yugoslavia (ICTY) and the International Tribunal for Rwanda (ICTR) dramatically changed the treatment of sexual violence in international law.

Progress is currently being made in the political arena. Non-governmental organisations, like HRW and Women Under Siege, play an important role in spreading awareness and knowledge, which is crucial in spurring political action. Humanitarian organisations save lives on the ground by offering medical help and counseling. The International Rescue Committee, for example, arranges workshops with Syrian refugees to address problems of violence against girls and women. On a higher level, the UK government has launched an initiative with the aim of tackling sexual violence in war zones. The project funded the creation of a group of experts that can gather evidence of sexual assaults at short notice. Additionally, the group mentors international organisations working in the field and helps draft legislation. The scheme is fronted by Angelina Jolie in her position as special envoy for the United Nations’ Commissioner on Refugees. She told the BBC in May last year that “Improved cooperation between countries and international leadership like we are seeing today is crucial to bringing justice and ending impunity”.

However, all these political measures deal with consequences – they do not prevent atrocities from happening in the first place. What preemptive measures can be taken to combat sexual violence used as a weapon of war? Professor De Londras provides a threefold answer. Firstly, governments must train their armies in accordance to international law. Soldiers have to be taught what weapons they cannot use. Secondly, these kinds of crimes would not happen in equal societies, so if women’s rights were strengthened, it would lessen the chance of sexual violence being used as a systematic weapon. Thirdly, there needs to be a change of attitude. Professor de Londras concludes: “The law is mostly in place, an attitudinal shift is what is needed.”