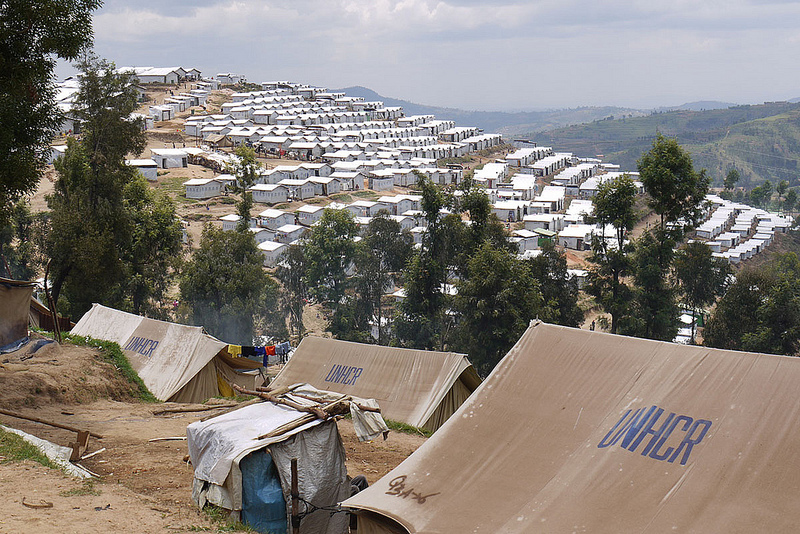 The Kigeme camp in southern Rwanda hosts over 14,000 Congolese refugees.

Around 14,000 refugees are sheltering in Kigeme camp in southern Rwanda, having fled a recent surge in violence in eastern DR Congo.During her January fifth one-day visit to the Kigeme refugee settlement, Clotilde Gasarabwe Mbaraga, the UN first Assistant Secretary-General for Safety and Security, praised the government of Rwanda. She noted their continued efforts to shelter and protect Congolese refugees, who have fled the ongoing fighting between Kinshasa’s government army and a group of mutineers, as commendable actions.

Back in May 2012, an insurgency sparked in the Democratic Republic of Congo (DRC), a fragile province of Kivu, between the Congolese army (FARDC) and rebels (M23). The armed fight has caused thousands of civilians to flee their homes to neighbouring countries such as Rwanda, causing many refugee camps to be flooded with people. According to the UNHCR, tens of thousands Congolese have fled the country, while others continue to live in internally displaced persons camps within the vast country.

By June 2012, a number of refugees requested to move back to the DRC, with about 512 Congolese refugees from Nkamira Transit Centre in Rubavu District of Rwanda actually crossing the border to the DCR. Anouck Bronee, UNHCR’s External Relations Officer told the New York Times in May 2012 that “because of the persistent insecurity and the volatile situation in North Kivu […] it doesn’t make sense to allow these Congolese to return yet [as] the situation is still unstable.”

After a period of relative peace, violence escalated in the eastern parts of the country in November 2012, when the M23 rebels seized Goma, the main city in the east. So far, approximately 5 million people have died since the civil war broke out in 1996 in the Congo. Additionally, tens of thousands of people have fled the country according to the UNHCR.

In December alone, over 4,000 refugees crossed the Rwandan border, sparking concern that the numbers of refugees will continue to rise at a rapid pace. The Rwandan government responded to this issue and announced plans to expand the 29 hectares Kigeme camp to cope with the growing numbers of refugees constantly arriving.

The increase of the size of the refugee camps did not affect the quality of them, as Gasarabwe not only expressed appreciation for Rwanda’s aid, but also noted the “cleanliness, infrastructure and security” within the camp during her short visit.

Even with the generosity of Rwanda and the ability to flee to a refugee camp, the Congolese refugees experience many challenges and difficulties which have a direct influence on their futures.

A girl at Gihembe refugee camp in Rwanda’s northern province, Jeanine Kaneza, 20, has been living in the camp since she was just 11 years old.

“I was separated from my parents, and I haven’t heard from either of them since,” she explained to reporter Grace Kayitar. “I don’t know if they are still alive.”

The camp in which Jeanine resides was established by Rwanda’s Ministry of Disaster Preparedness and Refugee Affairs in 1997, specifically for those fleeing the war in DRC. Kaneza was placed with another family in the camp by the ministry staff and was able to attend a refugee school set up by the UN High Commissioner for Refugees.

Life became more complicated when, whilst in secondary school, she became pregnant and shortly after dropped out of school.

“My health deteriorated greatly, coupled with having concerns about my parents,” Kaneza explained. “The absence of my parents caused me to worry and brought me to unending despair. I continued to live together with this hard reality, even after giving birth. I had lost confidence in myself.”

She attributes losing her parents at such an early age and becoming pregnant while only in secondary school to “ruining [her] future […] I live a joyless life. I constantly wonder what I have to do to live a better life like everyone else.”

These two factors seemed to have ruined her chance of receiving an education. Young Congolese refugees in Rwanda say that an inability to afford higher education leaves them with little hope of re-establishing their lives in the refugee country.

The Rwandan government attempted to fix this issue by establishing technical training in camps. However, with the great volume of refugees continuing to flood the camps the program has been overwhelmed and its resources have been exhausted.

Humanitarian organizations have also tried to offer assistance by connecting youth with scholarships to help further their education. However, aid such as this, the Rwandan government has discovered, is limited in quantity.

Idleness is a growing issue that needs to be addressed, as it has been linked to cause issues such as domestic violence and teenage pregnancy.

Due to the ongoing civil war taking place in DRC, many Congolese youths have been forced to flee for their lives and attempt to secure themselves a better future from the limited resources available to them in the refugee camps of the neighbouring countries.

Since the beginning of the year, however, there has been some positive activity between the FARDC and the M23. Gasarabwe’s visit, for example, came just days before a unilateral cease-fire has been declared between M23 rebels and the DRC’s government.

Peace talks give hope to the war-devastated country that conflict will soon be over and that Congolese refugees might have a chance to finally create a more stable future.