Leaving Cyrillic behind is not just about language for Kazakhstan 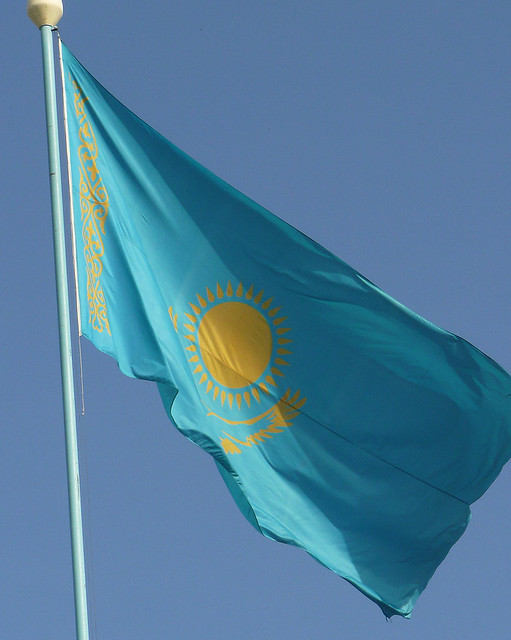 Kazakhstan – What do the three alphabets reveal about national identity?

As one of the lesser-known and more exotic languages of the world, Kazakh nevertheless has one trick that would probably baffle most people passing through the central Asian republic – the use of three different writing systems. The political significance of the different alphabets (Arabic, Cyrillic and Latin) and the Kazkhstani government’s gradual introduction of the Latin system to eventually eclipse the most commonly used Russia Cyrillic script, has led to international speculation.

The Kazakh language, a distant cousin of Turkish, was first written down using the Arabic script under influence of the southern Persians. Early introduction of Cyrillic began during the nineteenth century as the script of Orthodox missionaries from the north. However, in 1920, modern-day Kazakhstan became a member of the USSR and adopted a Turkic Latin script, followed by the adoption of Cyrillic from its northern sister in 1940, as was the case throughout the whole of the USSR. The Cyrillic system was in fact ill-suited to the sounds of Kazakh; nine letters had to be invented to supplement the existing thirty-three and eleven Cyrillic letters were not used for native Kazakh words. Despite this, the alphabet continued with the aim of unity within the Soviet bloc. Alongside the script changes came the widespread implementation of Russian as the lingua franca and the suppression, often brutal, of Kazakh national identity, including the execution of politicians and writers.

Due to its geographical situation in relation to its northern neighbour, with a shared border some 6846km long, Kazakhstan lay under Russia’s influence with deep and lasting consequences. It was the last state of the former USSR to declare independence. The result is that Cyrillic is still used as the primary script for Kazakh in both Kazakhstan and Mongolia (though the Arabic script remained in use for Kazakh written in China, Iran and Afghanistan).

A change away from the established Cyrillic, particularly given the nation’s proximity to Russia is therefore an interesting proposition. The Kazakh minister for culture and mass communications, Mukhtar Kul-Muhammed, remains adamant that there is no political motive behind the reform. According to him, the script amounts to “just signs, symbols… the alphabet has no national identity”. Under the instruction of the Kazakhstani president, the minister and a team of experts have been weighing up the pros and cons of such a reform since 2007.

However, the main driving force behind the shift seems to be to bolster the national pride of the Kazakhs in reaction to the somewhat colonial atmosphere of the USSR years. It would likely have the effect of nudging out the large Russian population (nearly a quarter of the country), even though Russian would remain the official language. This all plays on the idea, now less popular than it was twenty years ago, of the pan-Turkic (and largely Islamic) identity; roughly 70% of Kazakhstanis are Muslim, with a large part of the non-Muslim population being ethnically, and linguistically, Russian.

Yet the change may not be all good news for Kazakhstani independence. Considering that the vast majority of the population is fluent in the “official” language, Russian, and only two-thirds of Kazakhstanis are proficient in the “state” language, Kazakh, it has been suggested that it will in fact be damaging for the plight of the Kazakh language. Kazakhstanis will surely be reluctant to learn a new script and will therefore prefer to use Russian in literature, the media and business communication. There is also the drawback of the vast expenditure of changing the official script; road signs, school textbooks and legal documents, to name but a few, must all be transliterated in what would perhaps seem to be a pointless exercise. The government hesitantly estimates a potential cost of nearly £200 million.

It would certainly not be the first former Soviet state to change its writing system. Currently eight countries have moved away from the Russian script to the Latin or are in the process of doing so. These include the “Turkic” countries of Azerbaijan, Turkmenistan and Uzbekistan, while Georgia and Armenia use their own scripts. The only Turkic language in the region not to have attempted an alphabet change is that of Kyrgyzstan, since it is not financially able to instigate such a reform. However, these transitions have not been without their setbacks; a rather comical hitch in the new system in Uzbekistan found complaints from publishers. Since some Cyrillic letters had to be transliterated using two Latin letters (for instance, “ш” becoming “sh”), the size of texts grew by 10–15%, raising the price of printing and publishing. Indeed, the adoption of the Latin alphabet in Uzbekistan has been so haphazard that some are calling for the reform to be scrapped.

In another part of the former USSR region, the move away from the Cyrillic script has found the support of the Turkic Tartars of the Crimean peninsula, now part of the Ukraine. Largely as a reaction to the ethnically Russian majority, that is calling for the reinstatement of Russian in the area, this change in script could be a catalyst for more political and racial conflict in the region similar to that of the early 90s.

The Russian authorities and Russian minorities within Kazakhstan have, however, remained mute on the subject. Despite Kul-Muhammed’s assurances of no political motivation, there are clear signals that the Kazakhstani government is distancing itself from its Russian past and reawakening its cultural identity by closening ties with the other members of the Turkic-Islamic group. Altogether, the reform demonstrates a country that now has the economic and political stability to attempt such a bureaucratic upheaval.