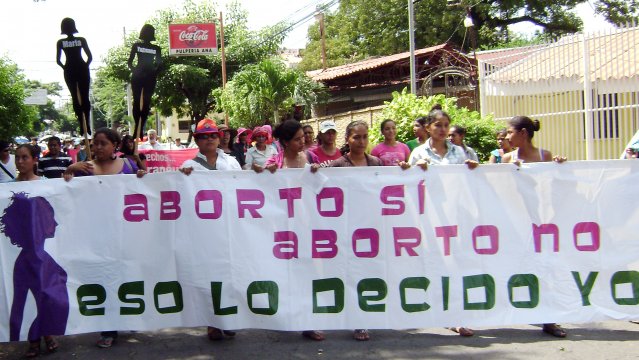 In August of this year, Sonia Tabora was released from an El Salvadoran prison after serving seven years of a thirty-year sentence. The court had overturned her conviction.

What had she been imprisoned for?

It was established during her appeal that at seven months pregnant Tabora suffered a miscarriage. When her family took her to a local hospital the doctors informed the police and she was arrested on suspicion of having provoked an abortion. She was convicted of ‘aggravated homicide’.

Furthermore, Tabora had become pregnant by a man she accused of raping her. A court did not agree and found the man not guilty.

Tabora´s story is tragic but it is not unique. In El Salvador, neighboring Nicaragua and Chile all forms of abortion are illegal, including ‘therapeutic abortion’. This means that a doctor cannot perform an abortion to save a woman’s life, nor for women who became pregnant after being raped or to underage girls.

This is the reason why thousands of women and men marched throughout the continent on Sept. 28 as part of the ‘Campaign for the Decriminalization of Abortion in Latin America and the Caribbean’ (Campaña 28 de Setiembre por la Despenalización del Aborto en América Latina y el Caribe).

Each year since 1990, protestors have taken to the streets to express their opposition to abortion laws.

One of the protestors, Dr. Vilma Núñez, the president of the Nicaragua Center for Human Rights (CENIDH), said in a statement released on the organization’s website that she was marching in order to oppose the law, which is “violating constitutional rights to life, health, and integrity; and not to be subjected to cruel and inhuman treatment.”

In Nicaragua’s capital Managua, a procession marched on the Supreme Court, Ministry of Health, and the National Assembly. In the northern city of Matagalpa protestors demonstrated outside a local catholic church with placards that read: “Bishops: Take Your Rosaries Out of Our Ovaries”.

Other protests were held across Latin American from Mexico in the north to Argentina in the south.

Worldwide there are only five countries that ban all forms of abortion: Nicaragua, El Salvador, Chile, Dominican Republic and Malta. Four of these five nations are therefore found in the Latin America and Caribbean region.

Until very recently Cuba was the only country in entire region of nineteen nations that allowed abortion in the first trimester of pregnancy. But this month the Senate of Uruguay approved a bill to allow abortion for all women in the first 12 weeks of pregnancy. However, there is some concern about the wording of the legislation and the intentional difficulty of accessing the services.

Elsewhere in Latin America abortion is illegal except for ‘therapeutic’ reasons and in cases of rape. But it is in Nicaragua, El Salvador and Chile where the law creates grave injustices for women. Dr. Núñez of CENIDH states that in 2011, “1,453 girls aged between 10 and 14 were raped in Nicaragua and forced to deliver” the resulting child.

Indeed, Nicaragua is the country in Latin America with the highest number of adolescent pregnancies. It is the opinion of Núñez that whilst this may be a social and economic problem, it is furthered by legislation that removes the option of abortion for underage mothers.

According to Gillian Kane, a senior policy advisor at Ipas, an international organization that battles for women’s reproductive rights, there is also a problem in that “few people realize that women actually go to jail in countries where abortion is illegal.”

Governmental statistics from El Salvador shows that since 1998, 628 people have been imprisoned on charges of abortion. It is unknown how many women are like Sonia Tabora and were wrongly convicted.

This figure includes the women who seek abortions, and also those who carry out the procedure. However, there is not figure that describes the number of women and girls who seek ‘back-street’ abortions each year and die because of subsequent complications.

Furthermore, Kane states: “Girls and women living in poverty are overwhelmingly the victims of restrictive abortion laws. The prosecution of women under these laws disproportionately affects poor, illiterate, marginalized women – and this is egregious.”

Whilst there may be some optimism felt by human rights organizations in Latin America with Uruguay’s decision to legalize abortion, it awaits to be seen whether the lawmakers are listening to the pleas of the organizations in Nicaragua, El Salvador and Chile.