Is Islam really to blame – again? 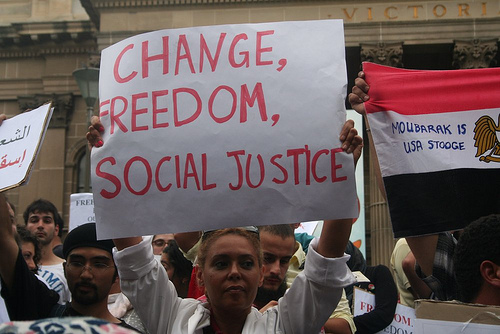 Democracy should be a tangible dream

“Revolutions in the region have a habit of going horribly wrong, and this may well have something to do with the fact that Islam and democracy appear to find it difficult to co-exist for long.”

This is what Julie Burchill wrote in The Independent on 3rd February, appearing to channel eminent Oriental scholar Bernard Lewis, former Middle East advisor to George Bush, and his neo-Orientalist crowd of academics doomsaying a fundamental “clash of civilisations” between East and West. And she is not alone in her reaction; many in the West are pessimistically predicting “a new Iran” or “an Islamist takeover.”

This seems to me like a serious misunderstanding of the situation and the forces at work in Tunisia, Egypt and the wider Middle East. If these commentators were paying attention and not just following their prejudgements, they would have realised something: this has nothing to do with Islam. Nothing, nowt, zilch, diddlysquat.

Egyptian people have taken to the streets because of poverty, education, opportunities, corruption, jobs, police brutality, inflation and a whole list of other related issues, and Arab writers have been saying so for years. Most think the solution is a new government, they hope a democratic one. A few think the solution is the stability that the Mubarak regime is still trying to offer.

They pontificate over why Muslim countries seem incapable of democracy – they’re not, look at Turkey and Indonesia. Depending on their political leanings, they blame a number of things, but Islam is the most common.

Well here, finally, is what we have all been waiting for. This is a genuine, popular mass-based movement for democracy. The Islamist movements in Tunisia and Egypt have been caught unawares, they are reacting two steps behind the demonstrators. The Muslim Brotherhood, a large, organised and influential group in Egypt that for 30 years have been the only real opposition, didn’t get involved until half way through, and their supporters are just a small number of those protesting. The overwhelming tone has been secular and inclusive of the Coptic Christian minority. The only thing is that a lot of protesters just happen to be Muslim.

Muslims also worry about education and the economy.

But a lot of pompous academics have written a lot of thick, wordy books about why Islam is incompatible with democracy and they are about to be proved wrong by some very brave Egyptians, and then possibly some Jordanians and some Yemenis, and maybe even a number of Libyans and Algerians.

Is it possible that it is because, deep down, these academics believe democracy is for white people? They seem to imply that anyone brown, black or whatever else should sit and suffer under oppressive regimes while Western people diagnose their problems and their faults and send aid packages, while quietly propping up the dictators. They refuse to credit citizens of 3rd world countries with agency, that is the power to make decisions in their interest and act on them. And this year Tunisians and Egyptians are showing that they have agency in spades; they have made a decision and they will stand by it. They want democracy and a better life, and they have discovered that the people, when they are united and determined, have the power to demand it.

The people wouldn’t let them.