Has the birth of the African Nation-State changed anything? 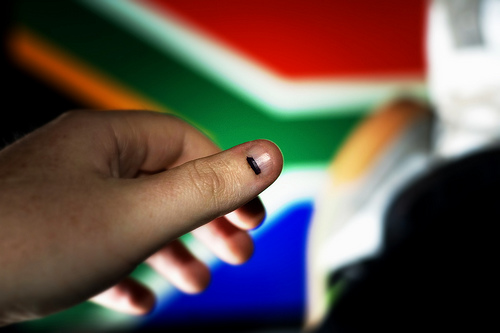 Are elections in South Africa providing only a fantasy of democracy?

For those of us in the business of saving Africa, it is hard to ignore the strange absurdity hanging over the present when contrasted with the past. In fact, if you look closer you might assume that the modern, for lack of a better term, African nation-state, note here that this reference is valid both for failed and functioning states, is an unlikely hero. It is an absurd hero in its own story, in its history. I write these words with absolute conviction that the dynamics of Africa have changed but yet remain the same. The African democracy, of today, is frozen at a point hidden in its disturbing history. The present seems like a new cloth on an old body. It is oddly the same and it does not fit.

To understand this truth, you must study it with respect to the single African individual. The one that is standing in a long queue ready to cast a vote that will invariably never be counted or the African who has fled, for reasons economic or political, to seek greener grass to graze in. They are a manifestation of the absurdity that has gripped the African present. Because democracy, or rather the illusion of it, is what the nation-state was created for. The man that casts the vote supports it and the one that flees from it supports it as well.

Confusing, perhaps, but true. In a long conversation I had once, I was told, rather bluntly, that things have not changed. I found this quite astonishing because the conversation took place in South Africa and it was a South African who had shared with me this unsettling truth. How can the present be in anyway similar the apartheid past? The answer was simple. Because we are living just as we had done before. We are still poor, living in townships, working in the same professions, we are still poor. I understood immediately what he was proposing. The most dehumanising factor about the apartheid system was not its racial segregation but its economic imprisonment. Economic opportunity was awarded to a privileged few, just as it is now. The unfortunate masses were locked, and tragically damned, to an absolute state of poverty. It is the same, I was told, the system has been removed, or rather renamed, and the communities that were previously marginalized continue to be so. There was no freedom then and a strange sameness haunts the present.

Perhaps, to drive my point further, one should examine Gogol’s “The Nose”. It is a quirky narrative on the absurd predicament of a certain bureaucrat who one morning loses his nose. He embarks on a fruitless search to reclaim it. One morning he awakes to find it returned. Thereafter, life takes on its previous routine as if the nose had never disappeared. Just as there once was colonisation and then there was none. This state of independence that made the African nation-state has become nothing more than a new oppression.

It is, undoubtedly, a loaded statement but an obvious truth. It seems that in countries such as Zimbabwe, Uganda and Egypt, the liberator, or his successor, has taken on the role previously played by the coloniser, as oppressor. The people find themselves in a new phase of an old predicament. It is, at best, a continued cycle of oppression and repression that most have found themselves in. If we return to the man at the voting station and to the man fleeing for better conditions, we see two individuals in the same situation, absurd heroes and, in their own right, each dealing with their plight. Just as Sisyphus before them, they are tragically aware of their plight and all its misery. But the man, who continues to vote, because he can or because he should, momentarily escapes his oppression. In that moment when he stands in the long queue ready to put to paper his recommendations for the future of his nation, he is fighting back, albeit silently and quietly. The irony in it all is that in his fight he is enabling an inertia or a continued repression of human rights but, like the classic absurd hero, he continues to vote as Sisyphus rolls the rock up the hill, simply because in that line and in that struggle to vote it is true that things will change because of him. The man who runs away chooses to do so only because he can no longer live in an irony and is fuelled only by his hope to return when things are changed – this hope is the absurdity.

It is the unending struggle towards liberty and peace and the deadly inertia that ensues that makes the African nation-state an absurd hero and by extension, its respective population.

Camus once wrote in L’Étranger, “Aujourd’hui, maman est morte. Ou peut-être hier, je ne sais pas.” My mother died today, or perhaps yesterday, I am not sure. That is the state of the African democracy at present. It has become an event we cannot qualify. It is not a good thing.

Indeed, it is all a great tragedy. But the greatest tragedy of all would be apathy in the man in the line about to vote or in the man who is fleeing the irony. Not only because they would have been defeated by the truth but because they could be me and they could be you. And we must fight even if it is tragically unending.