Fighting for Independence in the Great Desert 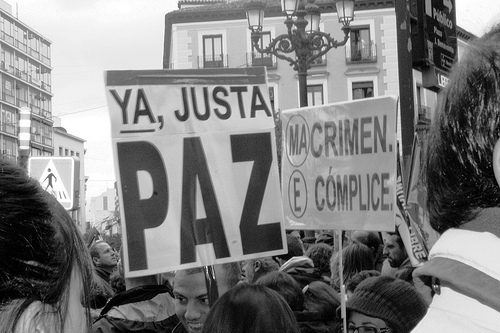 Support in Spain for the cause has been important. (The placards read: “Now, just peace” and “Morocco: Crime, Spain: Accomplice”)

Whilst Britain’s eyes are turned towards Burma, China and South Korea, accusations of incitement to rebellion have been flying in the west of Africa. Last week, Moroccan forces raided a protest camp in the disputed territory of Western Sahara, in an attempt to dismantle it, killing up to 11 people and injuring 700 more. The violence overshadowed talks being held in New York aiming to reach an agreement on the autonomy of the area, after 20 years of deadlock between the Moroccan government and Western Sahara’s liberation movement, the Polisario Front.

Morocco annexed the territory in 1975 after Spain’s decolonisation, after which followed years of opposition and guerrilla activity on the part of Polisario, backed by neighbouring Algeria, until a ceasefire in 1991, imposed by the UN. Since then, there have been several attempts to hold a referendum on the territory’s autonomy or complete independence, but one side always finds fault with the other before anything can be decided. The talks last week, held at the request of the UN Secretary General in order to reach a mutually accepted political solution, ended with an arrangement to meet again in December.

Animatou Haidar, a prominent Sahrawi human rights campaigner, nicknamed “Ghandi of Sahara”, spoke out against the actions of the Moroccan forces, saying it was a deliberate attempt to sabotage negotiations. She said she believes this “massacre of the Sahrawi people” could be classed as a “crime against humanity”.

But, as with so many incidents in this part of the world, there are contradictory reports. On the one hand, Polisario claims that 20 people were killed and 4,500 injured in the clashes at dawn last Monday, whereas the Moroccan media put the figures at 10 security personnel killed, and 700 people injured. Eye-witness accounts quoted in the Spanish press talk of an “exodus” of Sahrawian refugees heading back towards the capital of the territory to escape the military forces and low-flying helicopters transmitting “intimidating messages” whilst the Moroccan press cites calls from Sahrawians to the Polisario Front to re-arm and fight back.

Nevertheless, whichever source you choose to believe, it is clear that this was a calculated and tactical move on the part of Morocco, even if it has not won them international favour. The camp, named Gadaym Izik, was set up just last month, 12 km from the capital Laayoune by internally displaced Sahrawi people as a protest against their living conditions. Around 20,000 people have been living there, as part of a campaign for more economic freedoms. Currently, Morocco controls the territory’s natural resources (mainly phosphates and fishing) and provides subsidies for Sahrawians in order to garner the population’s support, but discontent has been brewing for several years among the local population about this arrangement, who expect the government to provide jobs and redirect revenue from these resources back into the local community.

Interestingly, this protest, the largest since Spain withdrew from the territory 35 years ago, is not led by the Polisario Front and is not demanding independence or self-governance. Although most Sahrawians familiar with the protest are pro-independence, the economic issue has become a separate one. Morocco spends a considerable amount on these subsidies, which are not given to other Moroccan citizens, but it keeps the Sahrawi people dependent on Rabat’s government.

The raid on the camp has been seen by some as propaganda by Morocco, after a spokesperson for the government said the forces went in unarmed to stop an attempted take-over of the camp the previous night by Polisario rebels, who were said to be holding the protesters captive. However, other sources have suggested the date of the raid had been fixed well in advance and there are no other reports of Polisario involvement. Foreign press has had very little access to the area and the only eye-witness accounts are from Spanish aid workers caught up in the violence.

Scores of Sahrawians now live in Spain, where thousands attended a demonstration on Saturday in support of and solidarity with Western Sahara. Many of those marching in Madrid expressed concern at the information coming out of the area, including notice of many missing persons. Actor Javier Bardem spoke to the crowd, saying “How much horror will it take for the international community to protect the Saharawi population?” And this is a pertinent question, because as long as clashes such as the one witnessed last week go largely unreported, Morocco will be able to maintain the stalemate it has kept up for 35 years. It may offer a referendum for autonomy to the territory, but it is constantly looking to prevent any progress being made.

So, unless decisive action is taken soon, sparked from the recent outcry, the plight of the Sahrawi people is likely to continue long and hard. Despite numerous criticisms of Morocco from Amnesty International and Human Rights Watch over abuses of rights, nothing has changed. The attention of the international community is difficult to grab, with human rights abuses rife across much of Asia and Africa as we speak. This means that, sadly, the situation in Western Sahara is going to have to get a lot worse before it can get better.