Embattled Lands Suffering at the Hands of Two Governments 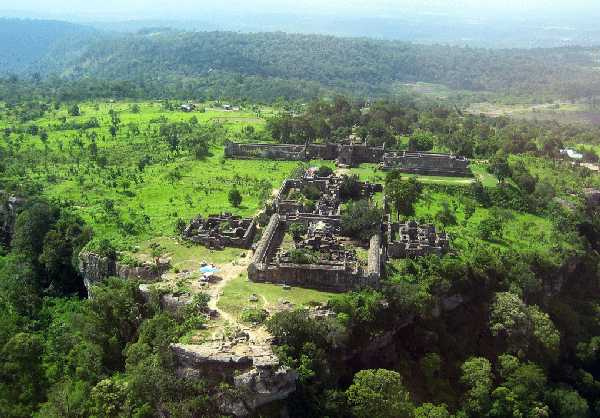 The contentious border lands of the Preah Vihear temples

Earlier this month, the people of the Preah Vihear region in the jungles of northern Cambodia were subjected to a now familiar experience. Instead of the enjoying the tranquil echoes of the surrounding rainforest or the bustling of farmers going about their daily lives in the paddy fields, the roaring thunder of explosive shells and the piercing cracks of Kalashnikov fire resonated along one of the most dangerous and volatile borders in Asia.

Despite looking wholly out of place amidst such calm serenity, skirmishes between Thai and Cambodian troops like this are relatively common. Since 2001 there has been a significant military presence in the region, and from 2008 stand offs have become an almost daily occurrence. Most pass without incident, but in April 2009 an exchange of fire across the border left two Thai soldiers dead and seven wounded, and this new round of fighting has already left eight dead from the intense shelling of both militaries.

So, why is this happening? What caused the military build-up and the subsequent hostilities? Ask almost any Thai or Cambodian and they will give you the same answer: The Preah Vihear temples.

Built by the Kings of Angkor, the temples were constructed in the 11th century when the Cambodian Khmer empire was at the peak of its power – the same empire responsible for constructing Cambodia’s famous Angkor Watt temples 3 hours’ drive away in Siem Reap province.

Ownership of the temples has been disputed for over a century, as maps drawn by the French in the early twentieth century showed the complex as resting firmly within the territorial borders of Indochina (what is now Cambodia, Vietnam and Laos), however the validity of these maps were later challenged by Thailand following French withdrawal, with Bangkok refusing to recognise any notions of Cambodian sovereignty over the site.

In an attempt to resolve the matter, in 1962 the International Court of Justice awarded the temple to Cambodia, but Thailand seized the surrounding territory, leaving the site all but inaccessible from the Cambodian side and both states claimed Preah Vihear for themselves.

Since then little has changed. Thailand attempted to take the temples by force in 2001 over accusations that the Cambodians were polluting the water supply, and when Cambodia’s application to grant the complex UNESCO World Heritage Status was successful in 2008, it only intensified Thai resolve both amongst the population and the government to reclaim the temples as a matter of national pride.

On the surface it would appear as though the situation isn’t particularly taxing in its complexity. Both sides want control over a temple that geographically both have a legitimate claim too. To Cambodians, Preah Vihear stands as a magnificent illustration of their cultural heritage before French occupation. To Thais, it is a tantalising opportunity to restore national pride lost in 1962. For both sides, it is a potential goldmine for tourism revenue.

However, below the surface the motives behind the violent exchanges along the border would appear to be far more dubious. It should not be of any surprise that any significant incidents have a striking tendency to occur around the same time as political or social unrest in either country. It is no coincidence that the current standoff comes at a time of political instability within Thailand and uncertainty surrounding what will happen following the death of the ailing 83 year old king Bhumibol Adulyadej.

There is similar growing frustration within Cambodia at widespread corruption and incompetence at all levels of government. Fanning the flames of nationalism through a clash over an emotionally-charged temple can provide a convenient opportunity to diffuse tensions.

It is an open secret that there is mutual animosity and suspicion between Thais and Cambodians. To the Khmer, Thais are seen as the primary enemy and rival, historically their most fought against and bitter foe in a land where resources are relatively scarce. To Thais, Cambodia is a country which in modern history has gone from being a vassal of the French to a dangerous communist regime to finally being a puppet of Hanoi following Vietnam’s “liberation” of the country in 1978. Regardless of the inaccurate and unflattering regard with which each holds the other, such xenophobia provides both governments with a useful “get out of jail free card” when facing internal disorder.

This time, it would appear Bangkok was the instigator of this particular round of violence. With the prospect of upcoming elections this year, the governing People’s Alliance for Democracy, popularly identified as the “yellow shirts”, are keen to see a wave of popular support for the government in the hope of this being reproduced in the voting booth. Ahead of a special meeting of the United Nations Security Council to discuss the on-going crisis, the deputy leader of “the yellow shirts”, Korn Chatikavanij, denies his government was responsible for starting the conflict or that there is any advantage in its continuation:

“There’s absolutely nothing that Thailand or the Thai people gain from provoking such a reaction,” he said.

Similarly, whilst Cambodia’s authoritarian administration may not be responsible for the fighting this time around; they still reap the benefits of the inevitable wave of popular support for the government in their refusal to back down to the Thai “menace”, as seen by Prime Minister Hun Sen’s message of thanks on Wednesday afternoon to “all political parties and civil society” for their universal and overwhelming support of the government over the matter.

Fortunately for the people of Preah Vihear, the current round of violence seems to have stopped for now and everyone can breathe a sigh of relief. However unless a lasting solution can be found to resolve the temple dispute once and for all, the families who occupy the ancient villages and rice fields along the border will remain the unwitting victims of two governments who continue to manipulate an emotionally-charged issue so as to distract from their own incompetence and smoothing over civil unrest. For the sake of a thousand year old temple and the people who live in its shadow, let us hope a solution can be found soon.