Does Southern Sudanese Independence mark the start of a new wave of break-away states? 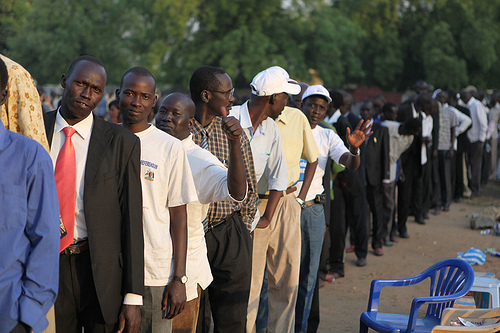 Southern Sudanese men queue to make history, voting on whether they wish to split from north Sudan.

Between the 9th and the 15th of January a referendum took place in which the South Sudanese voted overwhelmingly in favour of secession from the north of Sudan. The referendum is the product of peace negotiations from 2005, which officially brokered a deal between the mainly Muslim and Arab north, and the more underdeveloped, mainly Christian and Black south, whose history has engaged them in long and devastating civil wars. A staggering 99.57% of the polled vote was in favour of secession with a low of 95.5% in the northern-bordering region of Bahr Al-Ghazal. However, what is the greater significance of this for the African region as a whole? While the Southern Sudanese are largely elated, many African leaders are worried for how this may galvanise separatists within their own borders. Colonel Gaddafi has warned about the repercussions it could have for imitation movements across the continent, whilst the President of Chad has stated that “we all have a north and south. If we accept the breakup of Sudan, the domino effect will be inevitable”. On the 9th July 2011 Southern Sudan is set to become the 54th African state but will this lead to a 55th, 56th and 57th? This question points to what has made Southern Sudan eligible for secession and whether this is a pattern which will be easily replicated in other countries, or is idiosyncratic to Sudan.

After the 1880s’ “scramble for Africa”, it is no secret that colonialists drew straight lines across African territory, which haphazardly divided and trapped together tribal, religious and ethnic groups – an incoherent recipe for disaster. However, the history of African sovereign states has witnessed these borders largely remaining unchanged. As decolonisation became the defining feature of Africa in the 1960s, it was accepted by many African leaders that their new independent countries were often too weak to readdress entrenched and volatile border issues. Moreover, the international community’s growing defence of self-determination came in the form of “once and for all” self-determination, with independence granted to the borders the Europeans had created. Of course the result of this was often bloody civil wars with different groups vying to fill the power vacuums that colonialism had left. Resulting dictatorships, war, mass rape and even genocide conveyed that the struggle for independence was often not a final and uniting force in African countries.

Sudan, almost 20 years after Eritrea successful split from Ethiopia, stands apart as a rare case in which self-determination is being offered against this “once and for all” concept. On paper it is not the country that is best prepared for secession. Worries for whether the transition will be peaceful and successful are grave. There are many issues that are yet to be finalised including the traditional major fault line between north and south, which is the issue of oil. Accounting for 93% of Sudan’s exports in 2009, it is big business. Yet, the vast majority of oil fields are in the south, whilst the most important pipeline to the Red Sea goes through the north. Since 2005 north and south have more equitably shared oil revenues and an uneasy commitment to sharing continues. A huge question lingers over the oil-rich region of Abyei. It has a history of perpetual conflict between southern settlers and northern nomadic people and this region has not yet voted on secession. Moreover, the south, which has always been the more impoverished part of Sudan, does not have an infrastructure indicative of a successful government and organisation. It does not have sufficient hospitals, schools or roads to support its population of roughly eight million, and the Sudan People’s Liberation Movement rebels have only had limited experience of ruling over the region since 2005. It is not unfair to point to other examples of movements more ready to secede from colonial borders.

The most pertinent example is that of Somaliland, a self-declared but internationally unrecognised region of Somalia. It appears to fulfil a much greater possible range of criteria for becoming independent. It has a history of being a separate territory to that of the rest of Somalia as the region now known as Somaliland was a British protectorate, whilst there also existed the Trust Territory of Somalia (the former Italian Somaliland). Somaliland was independent in 1960 for three days and recognised internationally, before uniting with the Trust Territory of Somalia to form the Somali Republic. Of extreme significance is that modern day Somaliland has its own separate currency and a working political system with fixed government institutions, supported by a police force. These are things that the Southern Sudanese can only wish for. One other of many examples is Cabinda, formally part of Angola, which is separated from Angola geographically. Its history seems to warrant a greater perception of justified independence than the South Sudanese, as many in the independence movements see Angola as its modern day occupier after the Portuguese handed this protectorate over to be joined with Angola, without consultation, in 1975.

The fact that there appear to be regions more ready for secession mitigates the extent to which a domino theory needs to be proliferated. The same fears gained momentum in 1993 after the independence of Eritrea was announced and were unfounded for many years. The example of Somaliland conveys that being recognised internationally is the only criteria which matters for independence to be achieved. Thus, in Sudan it becomes clear that a willingness for actors within and outside of the state to cooperate for independence is what has made it exceptional and successful. The secessionist movement did not steal power from a strong and stubborn leader but, instead, all sides agreed on a referendum. President Bashir accepted that he would allow southern independence if a referendum was successful. The website for South Sudan Secession and National Independence argues that Sudan, Eritrea and the Western Sahara stand out in the levels of bloody unrest that they have experienced. After 48 years of devastation the Comprehensive Peace Agreement, which ended the second civil war, was the “product of vigorous international engagement, mediation and cajoling (by the U.S. and other key international actors and regional bodies).” This website argues that only the Polisario secession movement in Western Sahara has received as much international approval as the SPLM, which is the essential factor in this successful secession.

Ultimately, the secession movement’s cries can be repeated but they cannot be imitated unless the international community wants to support their causes. Yet, just as in the 1960s, it is still in the larger international community’s interest to deal with states they understand, rather than risk the uncertainty of creating new states. Southern Sudan is not likely to provoke a new period in international politics where the international community makes secessionism a feature of politics to address old wrongs. The wrongs are not easily solved and it is the interest of many to uphold the principle of established sovereignty over self-determination. Certainly, the powerful players of China and Russia will not allow secession to be the new fashion, otherwise Chechens and Tibetans might have something to say about it.