Democracy’s Champion: Burma and the struggle for freedom

The world’s media has been on the verge of swarming onto the Burmese political scene for a few months now, as world leaders increasingly flock to have a photo opportunity with democracy’s golden girl, Aung San Suu Kyi. Her release from 15 years of continual house arrest in 2010, largely overshadowed by the engagement of William and Kate, has seen a shift in the nature of Burmese politics at large and a relaxation of the regime’s tight control.

The life of Aung San Suu Kyi prior to her more recent political position is remarkable. Daughter of Bogyoke (General) Aung San, a man deeply involved with Burmese independence from Britain and assassinated during her childhood, and an ambassadorial mother, Suu Kyi graduated from Oxford with a degree in PPE. In order to take care of her mother, she returned to Burma in 1988, which coincided with a series of pro-democracy riots. After helping found the National League for Democracy in 1989 she was placed under house arrest, which continued intermittently up to 2010, Suu Kyi refusing offers to leave Burma. Her husband died of cancer in 1999, leaving her two sons. Suu Kyi was under house arrest at the time. 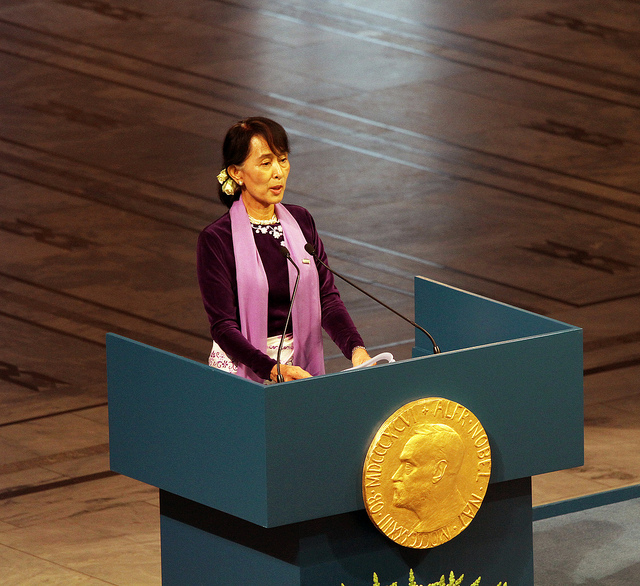 Her resilience and self-sacrifice towards the Burmese regime, amalgamated among the many other political activists who sacrificed everything up to their own lives for freedom, remained largely in a dark cloud to which the news cameras were not privy. Very little global support was given to Suu Kyi, save for the symbolic bestowal of citizenship and honorary degrees. Apart from the acknowledgement of her house arrest, these had no real practical value for the years that Suu Kyi spent in the ever-dilapidating lakeside home of her family. International sanctions were placed upon the country, but how much of that affected the regimes strength and how much of that merely increased the poverty of the average Burmese citizen is down to interpretation.

Recently, a U-turn has taken place, and we see more and more international figures, notably US Secretary of State Hilary Clinton and our own Prime Minister David Cameron, appearing in Burma to discuss moves towards democracy and a lessening of economic sanctions. Moreover, Suu Kyi herself has been given a passport and freedom to leave Burma, making full use of the opportunity to implore nations to aid her country.

What does this mean for the Burmese? The recent by-election saw Suu Kyi’s National League for Democracy win 45 out of 47 of the seats available, and the election, for once, stood. Despite initial conflicts over the wording of the parliamentary oath, a compromise was found and Suu Kyi and her successful party members were sworn in. From here, the NLD can begin influencing legislative measures in Burmese politics, although the extent to which this can happen remains to be seen, and despite their overwhelming win, they remain troubling outnumbered in parliament itself. A quarter of the seats remain reserved for members of the current regime.

The US’s lift of their import ban was in direct response to the elections held, however the mandate remains that should the reforms stall sanctions would be reintroduced. Yet, what does this tell us about Western responses? US sanction relaxation only occurred once the Burmese government had already begun the reform programme. Whilst it would be poor politics for sanctions to be removed before hard evidence of reform was available, it is telling that US policy seems to be following Burmese reform, as opposed to helping lead it.

Moreover, political activists within Burma are concerned that sanctions should not be lifted until reforms are completed. It begs the question of whether the sanction decisions in Burma are about the political situation at all, or whether they are about the question of East Asia as a whole. China’s control of the region has caused concern particularly with the USA. Their chequered past, as well as that of imperial countries, acts as a barrier to nations who see convenience and preference in affiliating themselves with a super power that can also act as a protector.

Burma has, in a sense, emerged as a new nation in recent years, born from the ashes of the old (though not overthrown) insular regime. Furthermore, there was always been a traditional animosity between the country and its super powered, super sized neighbour, dictated by Burma’s begrudging dependence on investment and aid. The speed with which one can see Western powers in particular swooping into Burma and showing their whole hearted support for Suu Kyi as the champion of modern democracy (to originally have used ‘queen of modern democracy’ seemed a little too oxymoronic) is at loggerheads with their somewhat lacking involvement in years past.

Whilst we can starkly reappraise the motives behind Western policy towards Burma, the fact still stands that their involvement has pushed open the transformation of Burma into the public sphere. For any of those idealists, democracy should be sought at almost all necessary costs, and therefore should we question the reason for the sanctions being lifted, should or even can we judge the use of economics to facilitate diplomatic motifs?

Suu Kyi’s unending struggle in Burma for social betterment is testament to those disenchanted with politics that despite our own internal difficulties we must still value the voice and freedoms that we are each allowed to possess. In a country crippled by poverty, by a military regime that has made significant reforms but still far from democratic, Suu Kyi and the NDL are beacons that change can always be made if one is strong enough to persevere. The West not should but must support Burmese reforms, if not for the humanity of ending a regime that has murdered countless civilians, but as testament and recognition of the relentless plight and perils that those within Burma have faced for decades.

If support isn’t given, democratic countries undermine their own institutions. How can a democracy use ideals as rhetoric for freedom and utopia when they stand as idle onlookers? Whilst this hypocrisy has yet to be founded and democracies have shown their support of Suu Kyi and reforms, there is still a lot that remains to be done. It is time that democratic powers flex their muscles and show the world that they will always stand behind another nations democracy, or else they betray the very ideal to which they pin their nationhood. No one understands this more than Suu Kyi herself, who has worked under the banner ‘use your liberty to promote ours’.