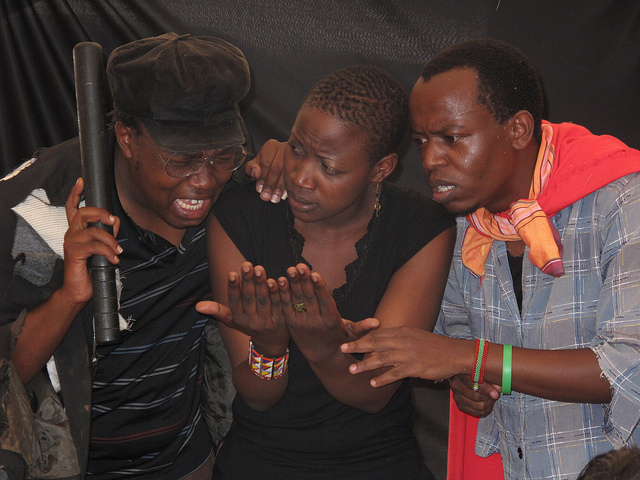 An acting workshop in Nairobi run by Kenya Collective, September 2010

In the UK, we are among the privileged few around the world who can enjoy cultural events performed by artists able to devote their lives to their passion. Drama, music, art and dance provide an income for thousands of people around the country, and indeed will continue to do so despite the impending cuts, meaning that our nation’s cultural output is vibrant, cutting edge and consistently attracts international acclaim. Productions, concerts, film screenings and exhibitions are well attended and in the West End for example, Box Office records were broken last year as growth continued. But for most countries in the world this is not the case. Their priority, for government and population alike, must be fighting poverty, wiping out disease and universalising education. And that is where Developing Artists come in.

This year, Durham Drama Festival, which , will once again be supporting the charity founded and directed by Durham alumnus and DDF patron Giles Ramsay. Currently focusing on eight countries, its objective is to foster a sustainable living for artists in developing countries by providing them opportunities to learn new skills and techniques, by promoting their work in order to share it on a world stage, and by attempting to break down financial and social barriers that prevent them from developing their talent. Alongside this, it organises international apprenticeship schemes in which British, American and developing country participants learn from each other in an exchange of skills, experience and fresh outlooks. As part of this, actors from Zimbabwe, England, the USA and Kenya have performed in American tours, Kenyan workshops and this year, plans for an Africa-wide and then worldwide tour are under way with two Durham alumni on board.

An export of British culture, a lesson in Western artistic practices, is this just repackaged neo-colonialism? “It’s totally not that,” says Callum Cheatle, leader of Developing Artists-affiliated initiative Kenya Collective, and director of DDF 2011. “It’s a collaborative thing, the people we work with give as much information to us as we give to them. It’s about an interchange of skills and cross cultural sharing and they leave in the knowledge that those who’ve attended the workshops will pass on their skills.” The driving force is to harness the abundance of creativity in Kenya, and indeed all of Developing Artists’ operating countries, and provide an approach for sustainable artistic project development, be that in local or traditional endeavours or Western style theatre.

Kenya Collective has worked with actors, directors, producers, singers, storytellers, poets, painters and its debut project last year culminated in a showcase of talent in the capital, Nairobi. Joshua Buto, one Kenyan actor who took part, will be taking the devised production that came out of the workshops on a national tour before he comes to the UK to perform in Hay Festival in July. This is precisely what Developing Artists is looking to see happening, where doors of opportunity are opened to its participants. Without funding or a base level of disposable income among the population, there can be very little or no internal support to back creative initiatives, no clear pathway showing how projects can be achieved, meaning there are very few of them, and therefore no international coverage of the arts within the country. But there is just as much passion, energy and talent in creative endeavours and the charity wants to see that talent valued. In showcasing African artists they want to shout, “Hey, stop what you’re doing and look at this, it’s incredible.”