Anti-Western Propaganda In The Middle East: Past Experience and Modern Lessons 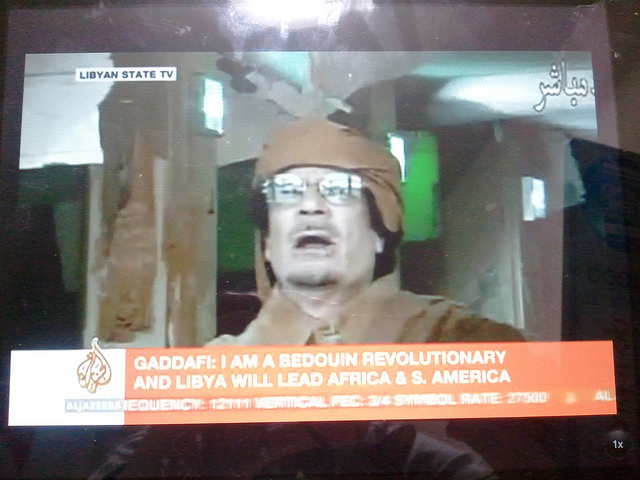 Recently deposed Libyan dictator Muammar Gaddafi declared in 1979 “America is involved in a conspiracy [against the Arab world]” and continued to deliver almost comically hyperbolic and unnecessarily lengthy rants against most of the developed world until he was ousted. This was duly followed post 9/11 by apparently hypocritical Al-Qaeda polemics against material wealth and consumer greed filmed on modern equipment amidst a backdrop of technologically advanced weaponry and commercial vehicles. Fast forward to March of this year. Syrian authorities have blamed large parts of the political violence in their country on foreign-backed gunmen. They claim that combined with religious extremists they are responsible for the deaths of 1,100 soldiers and police. Whilst it is almost impossible to verify such claims due to journalistic restrictions, one suspects them to be at best exaggerations of the truth, or at worst simply false.

Bashar al-Assad, the Syrian President, may cling to power using such dubious assertions, but one would be too hasty to entirely disregard all claims made by individuals or groups sceptical of western practices. If he had not used such out-of-proportion terms as ‘earthquake’ to describe the consequences for the region of western intervention in Syria, Assad’s warning against action might have been taken more seriously. He may well have a point to make – though NATO’s military intervention in Libya played a decisive role in toppling Gaddafi, Syria’s circumstances are indeed different. Middle Eastern states need to start expressing their grievances against the likes of America in a way that sits better with western populations that have firmly rooted anti-Islamic stereotypes and presuppositions.

This is particularly critical when there are many genuine grievances to be found. UN sanctions on Iraq imposed after the invasion of Kuwait in 1990 resulted in one of the worst humanitarian crises of the modern age: data suggests that it Iraq is the only instance of a sustained increase in mortality outside of war, famine or genocide in a population of more than 2 million in the past two hundred years. But what is worse, by effectively utilizing propaganda, sanctions served to make Saddam Hussein’s regime less reviled, as he was now able to turn antagonism towards the US and British governments.

The point of this article can be reduced to just this fact: not all anti-western messages are unwarranted or unfounded. Those who need a reality check as to the continuing ills the developed world inflicts on developing nations should read Joseph Stiglitz’s Nobel prize winning work ‘Globalization and its Discontents’. Very little has changed since it was first published in 2002. The structures of the World Trade Organization, International Monetary Fund and World Bank are still grossly unfair. The development strategies they insist upon in return for aid are still inadequate. Tariffs and quotas remain in place, and in particular the Eurozone’s common external tariff and common agricultural policy still present a significant barrier to badly needed trade for the Middle East. Though this may not be down to globalization per se, it is nonetheless an economic fact.

Moreover, the political as well as economic conditions seem set against the Arab world. The permanent 5 members of the United Nations Security Council hold all the cards in terms of key policy in international dealings with the region. American support for Israel in not only hugely unpopular in the Middle East, but is more conspicuously so as Palestine appeals to the UN for recognition of statehood. In short, it is easy to see how the average Muslim finds at least something that appeals to them in conspiracy theories of radicals.

These retaliatory messages against western powers cannot just be turned off. No matter what the content, new media technologies capable of reaching every corner of the globe simultaneously give our messages a heightened potency. The Internet immortalizes teenage bloggers and radical jihadists alike, and particularly since 2001 the latter have altered political discourse and attitudes in the Middle East to such a notable extent that it begs investigation.

However, developed governments do have the ability to lessen the pernicious impact that dictators’ messages have – messages that were around long before satellites and mobile phones. With more responsible foreign policy towards the Middle East comes increased respect and diminished potential for maverick dictators and organizations to confuse the issues and deflect blame away from them. This could be considered a necessity given the propensity of radical messages to influence Muslims in the western world as well. Lessons can and must be learnt from past mistakes.