A view from Chile: how cooperation is the future of Asia-Pacific relations 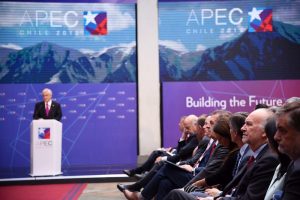 It is widely known that Chile has made massive progress in its economic and trade integration process with other countries. One of the ways in which said progress has been accomplished is through Chile’s participation in international forums, such as the Apec (Asia-Pacific Economic Cooperation) forum.

Chile’s involvement in the Apec forum, alongside the other twenty-one member economies, which constitute a trade group with a certain degree of economic affinity, has allowed the country to move forward efficiently and operatively towards the drafting of effective free-trade and economic cooperation agreements with the economies that play pivotal roles in global investment and international trade. Examples of such countries are the United States, China, Japan, Korea, and Australia. As of the present date, Chile has executed approximately sixteen free-trade agreements with Apec economies.

However, perhaps the most significant impact of such a forum is that the agreements executed therein not only impact the Chilean economy, but also society as a whole. For example, 14% of our workforce is employed by companies that participate in foreign trade with economies that belong to Apec, and over 74% of our exports are shipped to Apec economies.

In fact, since becoming a member of Apec in 1994, and despite the non-binding nature of the forum, Chile has positioned itself in Asia not only in the field of exporting raw materials such as copper, fruit and wine, but has also gained recognition as a serious country, whose institutions function properly, and which is open for the development of safe, collaborative and virtuous commercial relations. While studying in England, I was amazed by Chile’s positive recognition abroad, with the country even being described as one of the leading nations in the creation of links via free-trade agreements in the Asia-Pacific Region. Indeed, as a country, Chile has the “most powerful” network of free-trade agreements in the world, that is to say, the set of free-trade agreements with the highest level of access to worldwide Gross Domestic Product (GDP).

As a consequence of the Covid-19 pandemic, significant challenges have arisen for all economies, including Chile’s. The economic growth of the Asia-Pacific Region declined by 1.9% during 2020. Although the preliminary forecast was a decline of 2.7%, the new challenges are still considerable, because Chile is a country whose livelihood relies on being globally accessible to foreign trade. It is important to note that more than half of Chile’s GDP depends on international trade.

For example, currently for Chile it is vital to ensure and diversify the supply chain, in order to be able to speedily recover from the pandemic’s effects. In this regard, the difference in tariffs and the availability of goods in the exchange between member and non-member economies are critical issues. In this sense, Apec has facilitated Chile’s joint efforts towards the liberalisation of commerce, in the reduction of trade barriers and in the search for positioning itself in certain specific sectors. All of the above are key elements for achieving a prompt recovery.

However, not only trade and the strategic capacity to overcome the uncertainty of resource availability have become vital; also, as a consequence of Covid-19, megatrends related to various topics have become increasingly important. Unemployment, the impact of diseases, the revolution in information technology and communications have turned into preeminent challenges, for which Apec creates great chances in the generation of facilitation measures. For example, Apec’s active role has been displayed in the establishment of certificates that have simplified exports, as well as in the facilitation of the mobility for businesspeople between the member economies, via special permits. These are simple measures which have nonetheless allowed us to progress and differentiate ourselves from other countries within the continent.

Nowadays, we must strive to grow and develop in a sustainable and inclusive manner, protecting resources and not only natural resources, and we must create infrastructure and gain access to vaccines; for instance, to respond to public health needs and, finally, businesses, institutions and governments must contribute to a sustainable development. In this connection, we should also not forget that even though the public sector is at work, the private sector still plays a prominent role.

Last year, the Apec meeting was held completely online, and the same is true for this year’s meeting. This is notable because digital society is currently one of the main focuses of debate in expert panels. Apec, as an international forum, promotes agreements regarding measures to expedite customs proceedings and thus facilitates trade, allowing the adoption of agreements for a smarter, faster and more agile commerce. In summary, it creates value. Likewise, through these opportunities, strategies aimed at the flow of talent – the talent of new generations – can be analysed and proposed, so that as a country we can adapt to the changes that occur in the economy, especially taking into account that jobs will be lost as a consequence of automation. In addition, other matters that have gained relevance in the Apec panels are inclusive development from a gender perspective, and the ways to contribute to the development of small and medium-sized enterprises. All of these are crucial topics for the development of our country.

Therefore, as stated at the beginning, even though Apec is not a binding forum, it is a forum which creates consensus, to which other member economies can subsequently adhere to, despite not having initially expressed an interest in doing so. This makes Apec an opportune setting for the advancement and adoptation of measures for the facilitation of foreign commerce and free trade. In this sense, it is important for Chile to continue exercising an active role because our country and the rest of Apec members are economies that will inevitably be joined and linked by the Pacific Ocean.

Cecilia Andrea Díaz Alcocer is a Durham alumna and lawyer.