A joyful occasion blighted by cynicism 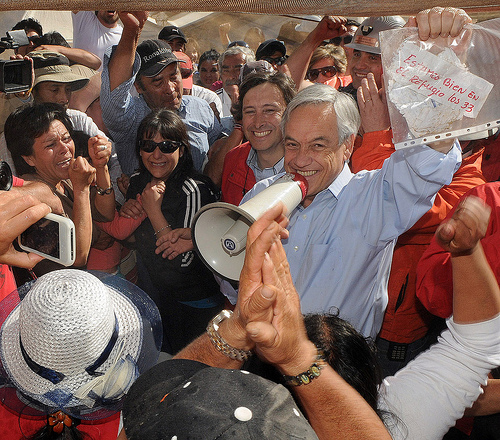 President Piñera making the most of a photo op, or genuinely delighted?

The 13th October, 2010. A date that will be etched into the memory of millions for the rest of their lives. But this was no 9/11, no 6th August 1945. This is a day that people will remember for the spirit of mankind, not for its destructiveness. A rescue mission from the very bowels of the desert. As each Chilean (and one Bolivian) miner stepped out of the Phoenix 2 capsule and into the arms of their partners, their parents or their children; individuals thousands of miles away found themselves in an unusual state of captivation. This was good news, an unabashed success story that spread the contagion of joy right across the globe. Whether Tasmanian, Kuwaiti or Ethiopian, citizens of the world united in celebration of the spirit and solidarity that los 33 had demonstrated during their ten weeks of hell.

In this country, however, popular and media response to this incredible example of brotherhood and courage took on another couple of dimensions. One was to treat the events in South America with a spoonful of humour, with the sharpest of observers remarking the irony of the day’s coincidence with Margaret Thatcher’s 85th birthday. But far more disturbing was the cautious cynicism that was exposed on social network websites and also pervaded into mainstream broadcasts. Perhaps this was to be expected from a nation famed for its emotional frigidity and scepticism, but this does little to lessen the absurdity of this reaction. This was a heart-warming tale that broke down national barriers and saw an outpouring of warmth and gratitude from all over the world. The promise that it would all be over by Christmas, for once, hadn’t been nearly optimistic enough. Yet even in the face of such positivity, there still seemed to be ample ammunition for the doubters to sow their seeds of gloom.

The main gripe was about the omnipresence of President Piñera and his manipulation of the disaster for public-relations purposes. In the darkest corners of Twitter, Piñera’s hands-on approach and commitment to his people were seen as little more than blatant self-aggrandisement, a strategic metamorphosis into the figure of a national redeemer. Mining Minister Laurence Golborne, too, was maligned for both vying for political advancement and for trying to save his own skin. Even the BBC correspondent Katty Kay gave in to such a dry analysis of events, writing: “With shots like these, Piñera won’t need campaign ads.”

Yes, elements were clearly stage-managed. And yes, the president’s popularity went through the roof as a result of the rescue. But would they have been better staying at home and shying away from the media attention? Was the concern shown by Golborne, who worked tirelessly throughout the entire operation, mere display? Of course not. Determined to find dissolute motivation and personal gain behind the actions of the powerful, the cynics only managed to make noise over nothing and miss the real story unfolding.

Caution over the future was also endemic. How would the miners adjust to their newfound fame? Would the pressures of re-familiarising themselves into the society 700 metres above be too great a burden? Important considerations, of course, in safeguarding the miners’ psychological welfare, and the coming weeks and months will tell us more. Intrusion must rapidly give way to privacy. But for the 13th of October, these concerns needn’t have been articulated quite so forcefully. The wonderful scenes of reunited lovers and families never had to be tainted by this creeping sense of dread and foreboding.

Similarly, issues over the future of Chilean mining were dominant. BBC journalists demanded answers as to why such an accident could have occurred, and what was going to change. The right questions, but the wrong day to ask them. The collapse in San José never should have happened, that much is clear. Changes must rapidly be implemented to ensure the safety of those in the industry. Someone must be held accountable, and this must never happen again. But the issues of blame and rectification could have been allowed to wait until the rescue mission was over. Instead, at times, this rare emanation of hope from a small corner of the Atacama found itself too often overshadowed by questions of guilt and compensation.

Several bloggers also complained about the religiously motivated T-shirts that many of the miners wore as they came out of the shaft. Thanking God on the front, the back of the shirts were printed with an extract from Psalm 95 that read: “For in his hands are the depths of the earth, and the peaks of the mountains too are his.” Critics claimed that by invoking God the miners were somehow detracting from the human endeavour and engineering expertise that had seen them safely rescued. Even as someone who professes no religious belief these criticisms were hard to identify with. Granted, the miners would never have been found, let alone liberated, without the efforts, aptitude and equipment of the rescue team.

But God existed in the hearts of those men, and for those sixty-nine days it was God that helped keep them alive. He might not be my God, but we have to acknowledge the power of the faith that sustained them. As Mario Sepulveda, the second miner to be rescued, declared: “I was with God and the devil. They fought, God won.” We need not put the marvel of their survival down to a higher power, but none of us have the right to declare that it was not God, but technological know-how, that acted as their saviour.

Despite these all-too-frequent bouts of unnecessary cynicism, coverage did take a largely celebratory tone. The moment was broadcast as both a miracle of fortune and an incredible feat of human perseverance and bravery. The story of the Chilean miners has provided us all a lesson in the fragility and sacredness of life – a persuasive reminder to do our best to be drunk, in a Baudelairean fashion, continually. And when we drink, to toast the men that confronted death, and won. ¡Vivan los mineros de Chile! Cheers!