‘Thatcher vs Miners’- why we need to respect local heritage.

A statement issued by Durham Student Union president Megan Croll this morning has described the student body as “ashamed, embarrassed and angry at the thoughtless acts of Trevelyan College Rugby Club, who have mocked the heritage of the people and community we’re proud of.” 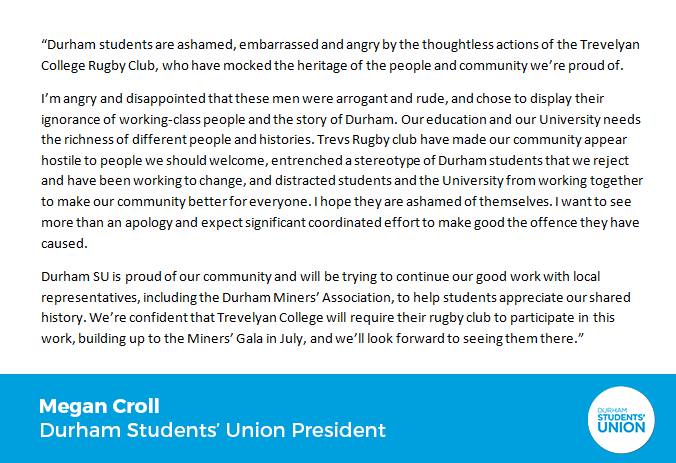 I fear that this may not be the case. When my college JCR issued a statement on Facebook last night condemning a ‘Thatcher vs Miners’ themed bar crawl to be hosted at our bar, I’m ashamed to say I simply read it, rolled my eyes and continued scrolling. This isn’t because I find such behaviour acceptable, but because I’ve come to expect it from Durham University students. The bar crawl, which was to be hosted by Trevelyan College rugby club, told members to come as miners with “flat caps, filth and a general disregard for personal safety”. Others were told to come as members of Thatcher’s government, or as “working-class-beating-bobbies”, with an eye to replicating the ‘Battle of Orgreave’; one of the most violent clashes during the miners’ strike of 1984-1985, where many argue that police used disproportionate and unprovoked brutality.

The Durham Miner’s association has condemned the event, which has “caused a great deal of hurt and anger for many of the local community who are rightly very proud of their mining heritage”. Durham is an incredibly beautiful city, and it lies at the heart of a county with a rich and complex history. The region was home to a largely working-class mining community which was devastated, and the industry decimated, under Thatcher’s government in the 1980’s. The heat of the conflict can still be felt today, in living memory of many of those directly affected by the strife. Although public opinion differs in the judgement of the success of Thatcher and her government, it is undeniable that events which trivialise the conflict, especially in the city of Durham, serve only to antagonize relationships between students and local people.

Coming to Durham, I could never have imagined just how homogeneous the student population would be. The majority of people I meet here are like me: Southern and middle-class. Diversity is an asset to any university, but recent accommodation fee increases and cuts to bursaries make it abundantly clear that Durham is in no hurry to become more accessible to people of working-class backgrounds. In turn, this leads to a dichotomy between students and locals, exacerbated by thoughtless acts such as those of the Trevelyan rugby team. The event is by its very conception divisive, and incredibly reductive of the very real hardships felt by those affected by the miners’ strike with whom we share this city. As the Miner’s association has also pointed out, there are of course students at Durham who are from working-class or mining backgrounds who may well feel alienated by such a careless mockery of their history. 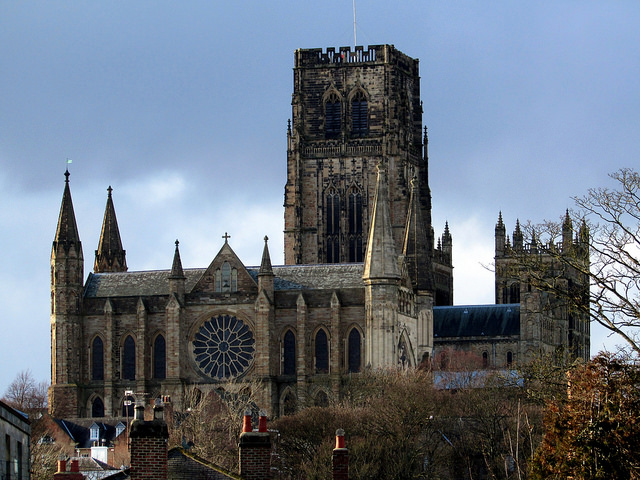 Of course, there are many students who will think it wrong to de facto condemn a bar crawl which features Margaret Thatcher. As I have already said, many are great proponents of her legacy, and it could be argued that to call off the event as it is offensive to local people is to enforce an anti-Thatcher narrative which is potentially unfounded. There is a time and a place to have academic debate surrounding the legacy of the contentious Iron Lady and to engage with the history of this region, but this is certainly better suited to the debate chamber of the Union Society or politics seminars than to Cuth’s Bar on a Wednesday evening. If we are going to ask local people to welcome us into their community, we need to be respectful of their heritage.

In a statement issued by the Durham University Labour Society, the event exemplifies “the abhorrent classism shown by many students at this University… This has added to the pretentious atmosphere of the university, and it is no wonder that many students from lower income families do not feel at home at this university.” At time of writing, the sustained silence of the Durham University Conservative Association in response to the scandal feels comparatively loaded. I am ashamed to say that I was surprised to wake up this morning to see this story on national news. It goes to show just how normalised insensitivity to class issues is at Durham University. If you’re going to go to university in Durham, you need to respect the all-too-recent history of this incredible city, which is still fresh in the minds and impacting the lives of many of the people around you, without whom your university experience simply couldn’t happen.