Why is the university so quiet about sexual abuse? 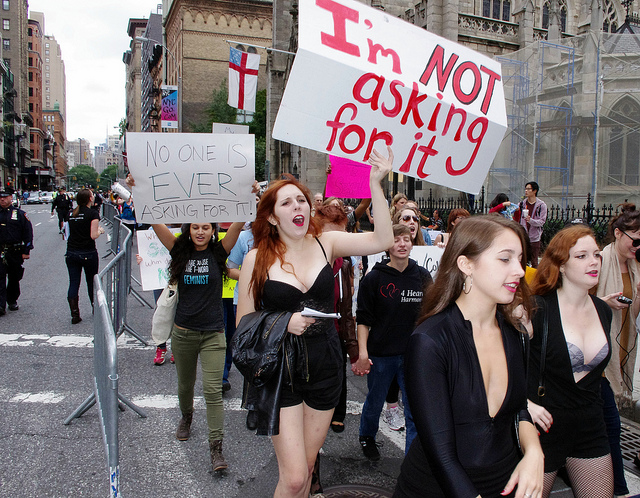 The Cuth’s rugby team have recently had their chat about sexual abuse, and been disciplined for their tasteless social last term. However it has recently come to light that in the wake of Durham’s exposure in the national press for the exploits of its students, it has been reported that Cuth’s responded by emailing its members and imploring them to stop talking about the incident. In remaining quiet on such issues the university runs the risk of failing in their responsibilities and becoming complicit in the trivialisation of sexual abuse.

The preoccupation of sport teams with sexuality is perhaps one of the most bizarre aspects of student life. Not only are the pimps and hoes, paedophiles and victims, professor and school girl themed nights tasteless but the roles forces them to assume unsettling and fetishistic hierarchies.

This, they will tell you is just banter. It is just a joke not to be taken too seriously. In actual fact, it seems more apparent that it is exactly this culture which is responsible for the trivialisation of sexual abuse, and allows a culture where one in seven university students suffer from serious sexual abuse.

Calling something banter reminds me of that typical signifier, ‘I’m not racist, but…’ that people use when they wish to discriminate by race, but know they’re not meant to. The existence of the misogyny and sexual abuse is contingent upon the capacity to disguise its true nature. That is, there is the requirement of normalising the transgression.

By presenting it as irony the trivialisation of sexual abuse is achieved while maintaining the façade that it is only a joke. Chants such as, ‘if she says no, molest her’ which attempt in their audacity to appear so ridiculous that they can only be jokes have become integral to this mechanism. What they say implicitly is ‘I’m not sexist, rape is just funny…’ In a wider sense banter is simply an excuse for mistreating people.

The problem is sexual abuse is not a ridiculous situation, it happens daily, and so by bringing the situation into the discourse in such a way undermines its credibility. There is also a secondary effect of undermining the real life situations. Very quickly these ‘ridiculous’ situations, which can only now be seen as banter, become real, but because they are only every presented as jokes and ridiculed, so too in real life some people are only able to see them as jokes. Perhaps the thought process might go something like this; ‘She can’t really mean no, because that would mean I was molesting her, and that is such a ridiculous situation it can’t be happening. Therefore she must be joking too.’

Sexual abuse needs isolation to prevent crimes being reported, or even talked about. This unwillingness to speak out is only reinforced by a prevailing sense that it is all just ‘banter’, especially when the university reinforces the ‘not-worth-talking-about’ attitude for the sake of its reputation.

In a similar vein to the Cuth’s gagging order, Butler College this week disciplined a student for sending a tweet which supposedly accused the Darts team of trivialising sexual abuse. So while on the one hand crass jokes alluding to rape are tolerate, tweets which demand a stop to it are disciplined.

Typically the university maintains a heroic quietism regarding the untoward behaviour of its students. The institutionalised alcoholism and contiguous sexual abuse is congenially overlooked. Perhaps this is because university is limited in what it can do to change attitudes – after all it is ultimately the views and behaviour of supposedly mature adults that is to blame. In fact the only legitimate help the university could offer would be the encouragement of, what I believe to be a silent majority to debate, and speak out against this culture.

The problem is that in the discourse of university life, words like ‘banter’ and ‘jokes’ have become the predominant discourse. They are pernicious in the way in which they erode the serious and undermine moral authority, making it notoriously difficult to criticise them without being criticised as ‘not being able to take a joke’. Sexual abuse is entwined in this dialogue and if it is not brought into an open debate this half-hidden discourse will remain, obfuscating the truth and facilitating abuse.

In attempting to prevent discourse the university has failed in its duties both pastorally and academically. Instead of confronting the issue, the gagging order issued only serves to reinforce the inherent gagging of sexual abuse. Under the banter there is a quiet torment which others would trivialise as jokes. In doing so, it has failed students who suffer as a result of transgressions tenuously veiled as humour.