Why Formals aren’t all Stilettos and no Substance 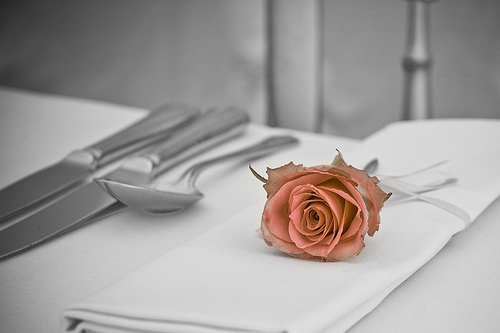 “Surely everyone knows you work your way in from the outside…?”

When I sat down to dinner at Formal Hall last week, the discussion at the table adopted a sour tone. The subject of contention? An article that was published online for The Guardian entitled “Elite universities: a clash of cultures and cutlery“. The article was written by a Durham University student who insists that students from working-class backgrounds inevitably feel inferior and alienated in the cultural settings of universities like Durham or Oxbridge, no matter how “well mannered and kind-hearted your friends are”.

It is not only as a fellow student of Durham University but also as someone from a “working-class” background that I am compelled to redress some of the claims in this article that pander to popular stereotypes of these universities which have been constructed by the media. And I am not alone in this defence. Indeed, one need not go any further than the extensive reel of unrestrained criticism posted in response to The Guardian’s article to gain insight into the general student opinion concerning its “narrow-mindedness” and often “condescending” tone.

This is not to say that I cannot sympathise with “working-class first-generation university students” who decide to attend universities that boast traditions such as Formal Hall and Matriculation. As much as I abhor these labels, I am under no illusion that many students are initially intimidated or disconcerted by the superficial and pompous appearance of such occasions. I am unashamed to say that I was one of them. I am also unashamed to say that I have since had my preconceptions irrevocably challenged.

To suggest that “formals” are simply a celebration of artifice and elitism is a gross misrepresentation, as I was reminded by my college Principle’s speech at last week’s event. Far from being something to both “dread and deride”, “formals” are a valued social tradition of the country’s highest achieving universities, and are integral to the social cohesion and prosperity of these institutions. When the Principle stood for his usual speech, the topic proved rather apt. We all toasted our college in unison as he reminded us that we are not defined by ceremony or rules of etiquette, but by the community that has been nurtured through such events as these.

Formals are an opportune occasion not only to engage in intellectual discussion with a diverse group of students, but also to interact with members of staff who genuinely want to support students. Formals have continued to be a success for this very reason, and any attempt to reject collegiate traditions would be to endanger this sense of community.

On a more practical note, “formals” are not mandatory and therefore students who still feel uncomfortable with the idea of Formals lose nothing financially by not attending. You will forgive the “working-class” penny-pinching way of thinking, but “formals” are not only an opportunity for “livers-out” to indulge in some free food, but also an opportunity to return to college and partake in some of the luxuries that college life can offer.

Upon interviewing my Senior Tutor, he acknowledged the fact that certain levels of behaviour are expected as “a sign of respect for one another”, and for the staff with whom you share your meal and your college. But if such articles as the aforementioned printed in The Guardian are believed to be accurate, then prospective students will surely be deterred by the image of guests at Formal Hall padlocked to the table, ensnared by bow ties and disabled by six-inch-high stilettos. It is this preoccupation with social division in the media that eclipses the virtues of rare social events such as “formals” and undermines the value of the collegiate tradition.

Integration, whether this be class, racial or otherwise surely can only occur when students celebrate the diversity which contributes to a rich community rather than endorsing the “us” and “them” attitude. I am not naïve enough to suggest that the class system has been rendered obsolete or that prejudice no longer exists, but the staunch generalisations that the media are willing to make concerning class and university education is proving slightly offensive.

One particularly incredulous student told me that “it is the suggestion that people from less privileged backgrounds cannot interact with their intellectual equals in a social setting without feeling inferior that I find most patronising. It has nothing to do with brandishing cutlery, but the extent to which students are willing to get over these absurd inferiority complexes and prove that they don’t need to use them as an excuse.”

So why is there an innate desire to brand people according to their class? Certainly the number of “privileged” students that attend top-tier universities exceed the number of those from less wealthy roots, but are students from “working-class” backgrounds really so incapable of engaging in intelligent discussion that we should refrain from applying to such institutions altogether? Surely it is this suggestion that the students should not fulfil their academic potential at the risk of mixing with the “upper classes” that is archaic, never mind the cutlery.

As far as the “Jack-Wills-wearing-etiquette-Nazi” stereotype that is attributed to Durham’s port-fuelled Formal Halls, it is this image, given life in sensationalist articles in the media, that continues to dissuade able students from applying to Universities, regardless of their background. So, just as the offending article ends on a note of advice for the prosperity and happiness of future students, so shall this defence.

Students should not be dissuaded from applying to top-tier universities if they are more than academically capable. Social alienation is not reserved for those from “working-class” backgrounds, but for those that reject community life and allow themselves to become inhibited by prejudice and stereotyping, your university experience is what you make it.