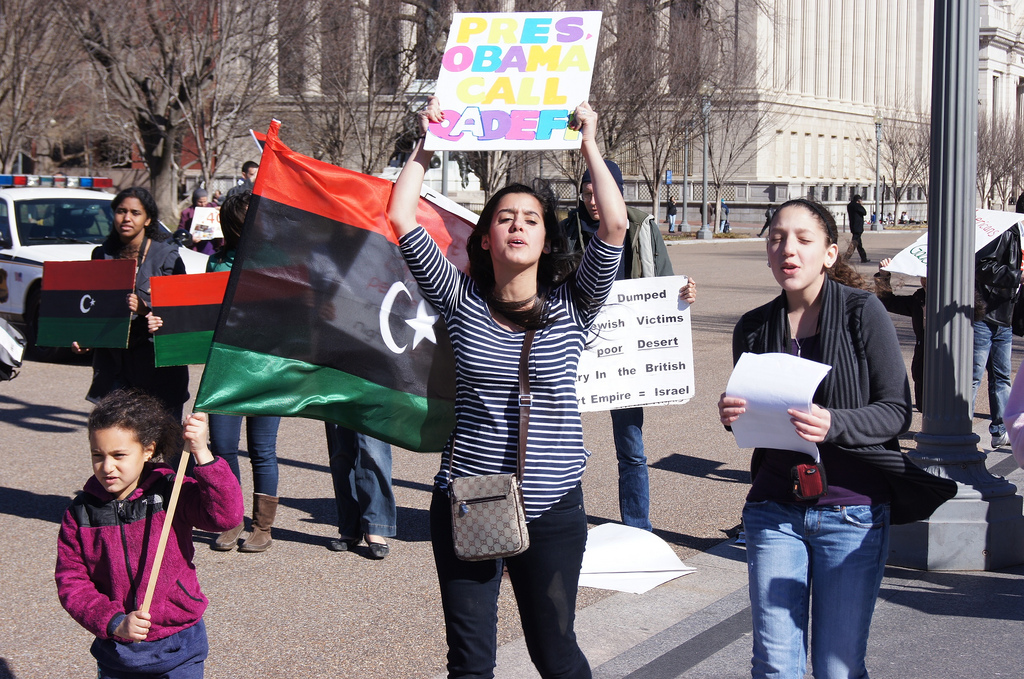 Protesters outside the White House

The UN Security Council has responded to Muammar Gadaffi’s claims of defiance by issuing a unanimous statement from its fifteen members which calls for an immediate end to the violence in Libya and demands that the Libyan dictator lives up to his responsibilities to protect his own people. The members insisted also that the safety of foreign nationals be secured and that blanket restrictions on media be lifted without delay.

Libya’s deputy ambassador to the UN, Ibrahim al-Dabashi, expressed his regret that the stance of the Security Council was too weak. “It is not strong enough, but any message to the Libyan government at this stage is good.” He voiced his concern, however, that “genocide” had begun in the west of the country.

Indeed, Gadaffi’s threat, in his rambling and incoherent televised speech, to purge Libya “house by house” and “inch by inch” has stoked fears that he wants to destroy the country and its people before being deposed. He announced: “I am not going to leave this land. I will die as a martyr at the end … I shall remain, defiant. Muammar is leader of the revolution until the end of time.”

Clandestine eyewitness reports from Tripoli relay stories of death squads of foreign African mercenaries patrolling streets and shooting at groups of people. Indeed, inhabitants are allegedly running out of basic supplies because they are too frightened to venture out. In Washington, the National Front for the Salvation of Libya said that 600 protesters had been killed and 3,000 injured, but the ban on media in Libya renders these claims somewhat tenuous.

Nevertheless, there have been reports of joyous celebrations in the Eastern part of the country where towns such as Benghazi and Tobruk are no longer under the regime’s control.

Likewise, Reuters is reporting that a senior aide to Saif al-Islam Gadaffi, the son of the Libyan dictator, has resigned to protest against the violence used by the regime. “I resigned from the Gadaffi Foundation on Sunday to express dismay against violence,” Youssef Sawani allegedly wrote in a text message sent to a Reuters correspondent.

Commentators from both Libya and elsewhere note an acute desperation in Gadaffi’s actions. An opposition activist in exile, Abu Nasser, said, “he is like an injured animal.” The former Islamist radical and Libyan national, Noman Benotman, who gave an address to the Durham Union Society only a few weeks ago, maintained, “he will stay and fight until the last day.”

The Arab League has barred Libya, the twelfth largest exporter of oil in the world, from attending meetings of the bloc unless the violence ends. It accused the country of violations against international law. Peru has severed relations with Libya for the same reasons, whereas Libya’s established allies in the South American region, Cuba and Venezuela, have denounced “imperialist states” for interfering in Libya and North Africa.

For more on this story see: