To Tahrir! (With gloves and binbags) 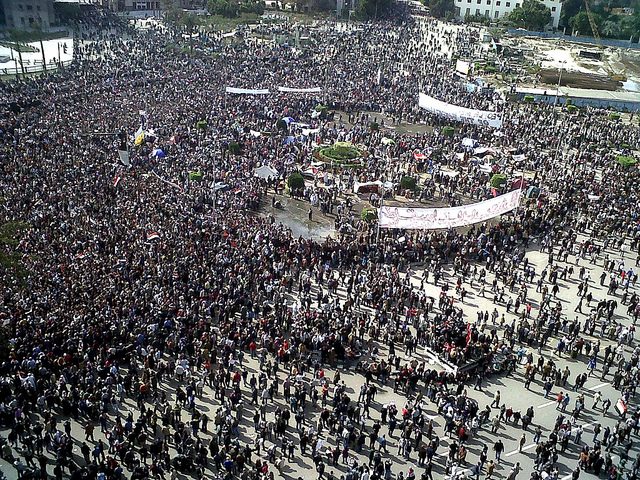 Tahrir square during the protests

Hello, Please retweet: a campaign to clean Tahrir Square, we want to work on it starting tomorrow…. It is our duty.

A month ago, most Egyptians would have chuckled; shrugging shoulders being too great an effort. Today, three weeks into neighbourhood watches and rediscovered patriotism, the above message is real.

A joke made the rounds at Mubarak’s last election:

“Mr. President, it’s been a long time, don’t you think it’s time to give your farewell address to the people?”

“Why, where are the people going?” Mubarak asks.

Nowhere, the answer turns out. In Tahrir, they stayed; numbers swelling, voices and insistence growing, revealing determination nobody foresaw.

On January 25th, when it started, it seemed futile, though brave – a few rebellious spirits standing firm in front of armoured vehicles, dodging jets of water, and eventually gaining ground. The forwardness was odd, the demographics less so – we’ve witnessed a decade of piddling protests in Tahrir: a handful of protesters entrapped in a giant circle of policemen, the whole scene feeble; silly even. They obstructed traffic, getting nowhere, going round and round like tyres stuck in sand.

It’s hard to put one’s finger on the benefits of Mubarak’s rule – I was only six when he came to power, flung to leadership when assassins’ bullets brought down Sadat. Only one memory remains of that day in 81: a blank TV screen, hushed family voices clustered round waiting, shutters down. An aunt suggesting that we stock up on food. A beginning that belied his oh-so-public, crowd-driven, end.

“Stability” was the often-trumpeted hallmark of the Mubarak regime. An absence of war, yes. The status of the respected elder, also yes. Many “friends”, few enemies. And an Egypt that quelled the fury of its Arab neighbours, once seething at Sadat for declaring peace with Israel.

But it was a visionless, deluded stability, three decades of a president preceded by rapidly white-washed façades and temporary flowerpots, zooming off to meet neatly groomed children, and beaming cronies, offering hearty handshakes to indicate that all was well.

Education – or the lack of it – may have been the regime’s greatest crime – there was literacy, certainly, and statistics on paper showed pleasing surges and steady growth. But these spoke little of quality – of minds awakened or developed to their full potential. In 2005, then working for a private organisation in partnership with the Cairo Governorate, my boss and I were asked to represent that institution at a conference in Venice, because the governor himself was busy and couldn’t find appropriate staff members to attend. In a Renaissance palazzo, with civil servants from around the Mediterranean, all there to tell us of the challenges of their own cities, there were awkward silences both ways. “So you don’t actually work for the government?” a trilingual urban planner from an Algerian town we’d never heard of asked, unable to guess why our mega city had had no officials to send.

And if the regime presented itself as a counterweight to the Islamist threat, it was reactionary, and superficially so, beyond belief. It never thought to nip conservative Islam in the bud, at schools, where fundamentalism grew rife. Surely 30 years worth of an enlightened education could have phased that out.

Across the decades, many bright Egyptians gave up, and consequently packed up. Dejected, Cairo municipality’s chief urban planner in the 60s ended up in the USA. He founded a school of planning, became its dean, and eventually witnessed it rechristened in his name. Some 45 years later, his equivalent, a woman, wouldn’t shake my hand. (“It’s religiously forbidden”, she said.)

Perhaps this has been Egypt’s biggest problem, decades of hopelessness and gradual, silent, but steady decline. And these are just two examples I happen to know.

That said, Mubarak’s recent demonisation is perhaps partially unfair – he wasn’t exactly a blood thirsty tyrant – he suppressed opposition, sure; but this was an inherited stance, not one that Mubarak brought about. His cruelty was indirect therefore: his regime allowing itself to fall in love with its own reflection, rose-coloured spectacles permanently on. A lack of real concern heralded sham improvements, while the country slumped economically and culturally as well. Money soon talked any sense of citizenship far out the door.

If there’s anything that’s surprising, it’s the indifference that’s suddenly gone away – a sense of unity and dynamism that’s built bridges across the chasm between social classes, a feeling that we can do everything, and that the future is collectively ours. In our family, old and young, we’d long smirked at our one cousin who bothered to get a voting card. Just this Christmas, I teased a politically active friend for being naïve and hopelessly out of date. Her conviction was that a people’s movement could somehow bring the government down.

Beyond today’s Egyptian euphoria, our biggest comfort is that future governments, of whatever shape and direction, will have to listen to the people’s voice, even if only out of fear. There are other things too… like the fact that privileged Egyptians have stepped out of gated communities and private schools and looked their bedraggled country in the face, instead of turning – or jetting – away. Beyond the flag waving and face-paint, we’ll need lots of rebuilding, and not just the sort requiring soapy water and brooms. Let’s hope that enthusiasm will evolve into dedication, and that a positive vision will rise from the debris. There’s much talk about a reformed constitution, but no mention of what civil liberties really entail.

From distant Durham, it’s difficult to really imagine Tahrir. I get phone calls from one friend after another, and in the background, I hear cheers. “Mabrouk!”(Congratulations) each one of them says.

By Saturday, five Mabrouks down the line, I ask the caller why.

“That’s because subconsciously you were.”