The Unreality of Exams, or How I Learned To Stop Worrying And Love The Curve 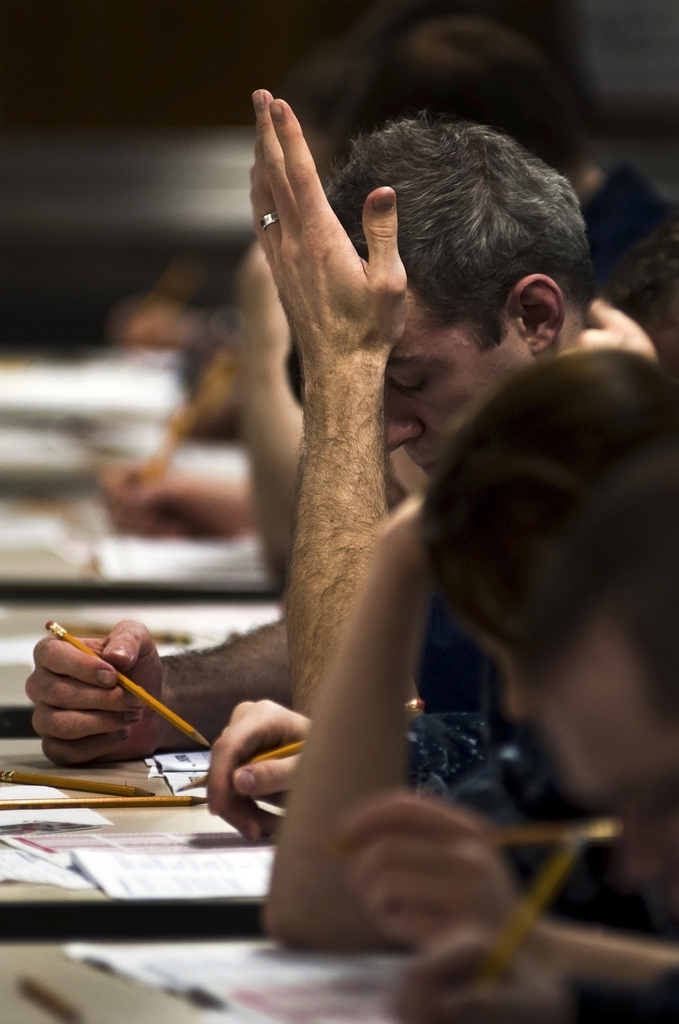 Are exams really worth stressing over?

Examinations work on the assumption that the ability of people at a given subject can be roughly modelled by a normal distribution and so if examined correctly the results will produce a bell-shaped curve. It is an assumption which has driven exams from a form of assessment into a current form which seems intent only on creating a corporate elite.

Such normal distributions are successfully created by a small number of variables. If we were to test people’s expediency in performing simple calculations you would almost certainly generate a bell curve, just like if you measured people’s heights. The difference is that in the case of the latter we don’t jump to the conclusion that it’s a good way to judge a person’s worth, while we call the former an IQ test.

We assume that people can be distinguished academically along a continuum such as that of height; yet this assumption is unsubstantiated and there is just as much evidence to suggest people’s potential contribution to society is more analogous to eye colour than height.

Durham’s finals’ results from the past decade are plotted above and clearly demonstrate a bell curve. They also show that the indefatigable emphasis on “Employability and Skills” can be seen to be due in part to the incompleteness of these curves.

Though “a degree from Durham gives you a huge advantage… it isn’t enough to guarantee you employment”, as you can see there isn’t enough distinction by these results alone. As the website says, further certification such as “the Durham award has been developed… to recognise all the extra skills”; and in doing so aims to further refine this corporate elite.

Last year 63 graduates received the award, which plotted on the above graph completes the curve. Of course the Durham Award is only illustrative, but it does demonstrate the mentality of this bell-curved thinking.

Such curves have often been used to justify the perpetuation of unjust social systems, and were used in some of the early statistical analysis to support beliefs in eugenics. The argument is simple. In nature we can always find this “normal” distribution, so if a trend in data conforms to such a curve we can say it’s natural, and infer a moral “correctness”.

Such was the argument of Karl Pearson who in attempting to justify the poverties of the Victorian era plotted the geographical distribution of paupers, and finding a curve declared that pauperism must then be genetic, inherited and hence inevitable – so long to social reform.

In the case of our exams we must ask whether the distribution exists because it is inherent or whether it exists because we assume it to exist. We note that the curves become more “normalised” throughout the decade which indicates that university policy has an influence; but is this the result of the university aiding all to realise their “fullest potential” (which is inherently “normal”), or is it because by assuming that there is such a distribution we succeed in creating one?

The Introduction to Poetry module is assessed by one three hour examination, in which candidates are required to write three separate essays on three separate poets. Poetry is defined by its intrinsic sense of time. Its rhythm is what sets it apart from other literature so it seems somewhat perverse to impose such stringent timing on the assessment of reading it. Students are encouraged to know what we are going to say before we go into the exam because there is no “thinking time”.

It is believed that assessment by coursework tends not to give adequate enough distinction between people’s ability – yet it is coursework which is far more representative of literary research skills. It seems in this case the examination is engineered to give a normal distribution even at the expense of a natural distribution, because we cannot accept that people might be equally able.

Having removed any scope for a natural, emotional or critical engagement with poetry during an examination, the assessment becomes merely one of memory and expediency. Reducing examinations to these basic variables aids in the creation of the curve. The final such variable could be that of randomness.

Seeing the solution to a problem or the ingenious argument for an essay clicking into place is usually at the mercy of the muses. Sometimes it can be immediate and other times frustratingly elusive, such that timing exams introduces a level of randomness which further aids the production of the bell curve – the normal distribution is described “as a first approximation to describe real-valued random variables”.

There are further degrees of randomness introduced to examinations in other ways. In politics, and many other subjects, it’s customary to give a selection of questions but not covering all the topics studied during the year, meaning that some candidates’ preferred choice will appear but for others it will be something they are less sure about; introducing another level of luck.

The majority of examinations generate their results not from subject ability but from these variables – expediency, memory and randomness – and as such the curves will always be generated. They are generated not because they are inherent or normal or natural, but because we make an assumption that they exist, and engineer exams to produce them. Examinations have been reduced to a game which tests a few faculties but pertains to segregate all according to their apparent “ability”.

Professor David Phillips, current president of the Royal Society of Chemistry, describes the scientific community as “a group of people with different skills who are joined by a common goal”, a sentiment well extended to most branches of academia.

Great theories are stumbled upon in many different ways. Charles Darwin and Alfred Wallace both came across the concept of evolution at roughly the same time but completely independently. Whereas Darwin’s insight is thought to have been conceived through a meticulous and studious cataloguing of life, Wallace’s came as a sudden flash of inspiration during a feverish onset of malaria.

The reality is that our minds each individually tackle concepts and problems in their own way, and this aspect is being entirely ignored by the current examination system, which in striving to produce a “normal” distribution of results assesses skills with an increasingly reduced perspective and in doing so neglects the natural distribution of talents.

From very early on in our education a majority are excluded by examinations. It is a process of segregation where we annex a majority and in doing so loose their contributions.

Exams are stressful not inherently but because of what we perceive to be at stake. We interpret the results to be synonymous with our overall intellect and worth to society. They are not testing your knowledge against the constancy of your subject knowledge but against everybody else, in a struggle to claw our way into that small, but exalted, place at the tapered end of the bell curve.

We spend inordinate resources on examinations and nearly one third of our time feverishly trying to prove who’s the best instead of simply getting on with unravelling this world and solving its problems. To do so we create an immensely stressful situation.

Studies show that “we learn best in stimulating environments when we feel sure we can succeed. When we feel happy or confident our brains benefit from the release of dopamine, the reward chemical, which also helps with memory, attention and problem solving. We also benefit from serotonin which improves mood, and from adrenaline which helps us to perform at our best. When we feel threatened, helpless and stressed, our bodies are flooded by the hormone cortisol which inhibits our thinking and memory.” Yet we continue our ill-fated love affair with these repressive overly competitive environments.

The corporate world demands an elite from the universities, not because it exists but because they wish to protect the notion that a few deserve very much more than the many. Such thinking requires us to tell many they are not worthy, and this is the ultimate goal of examinations, this is the extent of corporate insinuation into education. Your failure is not free, it’s probably sponsored by KPMG.