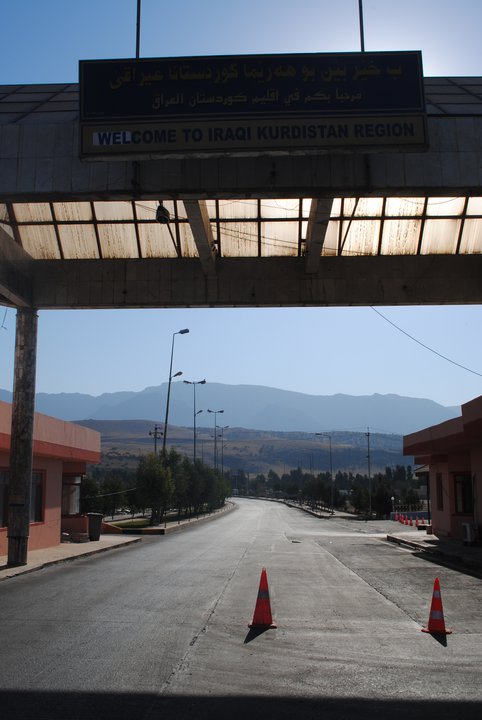 If someone mentions Iraq to you, a few things typically spring to mind straight away: war, terrorists, Saddam Hussein and bombs. This archetypal view of Iraq was certainly something I had to take into account before I rang my parents to tell them I was popping over there for a week. The phone call began with the usual pleasantries until I eventually broke the news. Once I explained that Kurdistan is in Northern Iraq, the conversation experienced a lengthy pause, and I waited with baited breath for my dad to say something. He eventually replied “Why?”

For people who haven’t done their research about the area, this is a valid question and one that requires a small history lesson. In 2003 when Iraq was invaded by America and Britain this came as something of a blessing for the Kurdish people. The establishment of the Kurdistan region of Iraq dates back to March 1970, with the creation of the autonomy agreement between the Kurdish opposition and the Iraqi government after years of fighting. This was followed in the 1980s by the Iran-Iraq war and the Anfal campaign by the Iraqi army during which thousands of Kurds were killed and tortured, in events such as the chemical attack on Halabja on March 16th 1988. The uprising of the Kurds and the aftermath of the First Gulf War led to Saddam Hussein’s Iraqi forces retreating in October 1991, leaving the area to govern itself. However, Kurdistan never declared independence and still remains a part of Iraq today even after the Second Gulf War, or The War in Iraq which began in 2003. 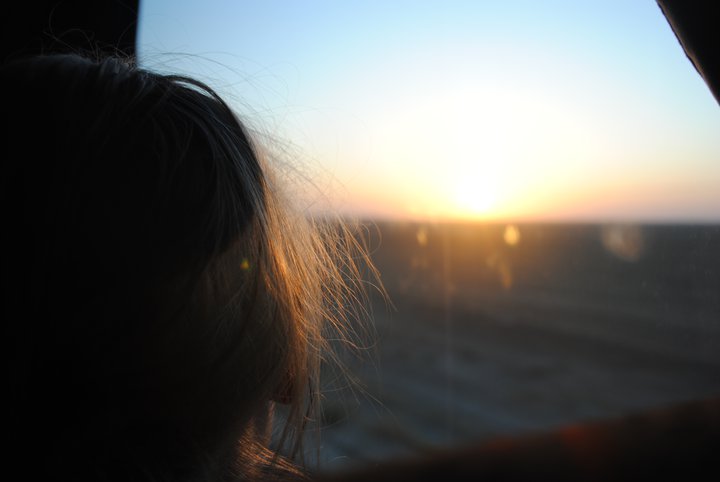 Nowadays Iraqi Kurdistan is fondly known as “The ‘Other’ Iraq” and one of the most important differences between Kurdistan and other more hostile parts of Iraq is that Westerners are in fact welcomed here for their part in overthrowing Saddam Hussein and freeing the Kurdish people from oppression. In Syria everyone constantly says “Welcome to Syria” but in Iraqi Kurdistan when they say “Welcome to Kurdistan” you feel they really mean it. There were many points during the trip where locals offered us free gifts or free rides in taxis, simply so they could have the opportunity to show us how beautiful the area is. 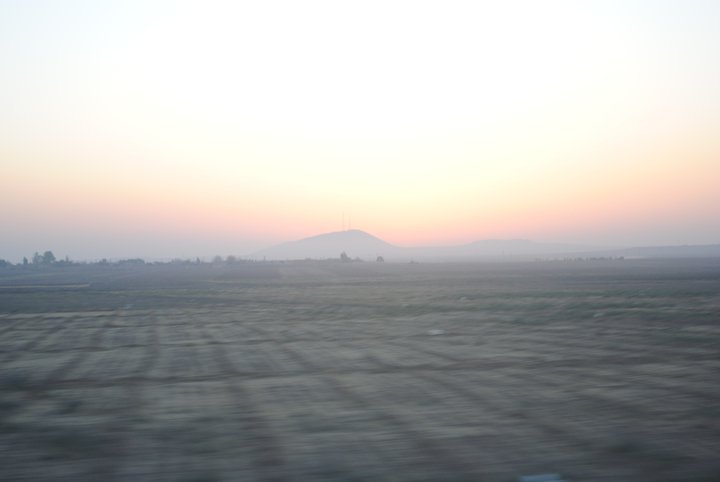 I left Damascus at around 10pm on a nine hour bus journey towards the Turkish border, as the Syria-Iraq border takes you into an area of Iraq next to Mosul, which is one of the most dangerous cities in the world. We then had to catch another bus in the morning through Turkey to the Ibraham Khalil border crossing at Silopi in Turkey which would take us into Iraq. The taxi cost across 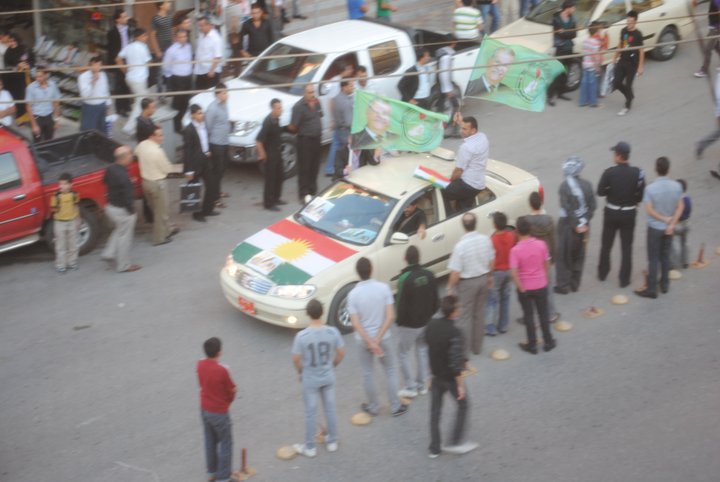 The celebrations were visible from our Hotel window

60 in total which was split with the two other people I was travelling with, and we managed to get into Dohuk in Western Kurdistan before sunset.

Dohuk is the capital one of the three governorates in Iraqi Kurdistan (the other two being Erbil and Sulaymaniyah). We appeared to arrive in the midst of a large celebration, a grand parade complete with flags and huge crowds was clearly visible from our hotel window. We later discovered that the reason behind the celebration was that one of the local representatives had secured a place in the Iraqi Parliament. 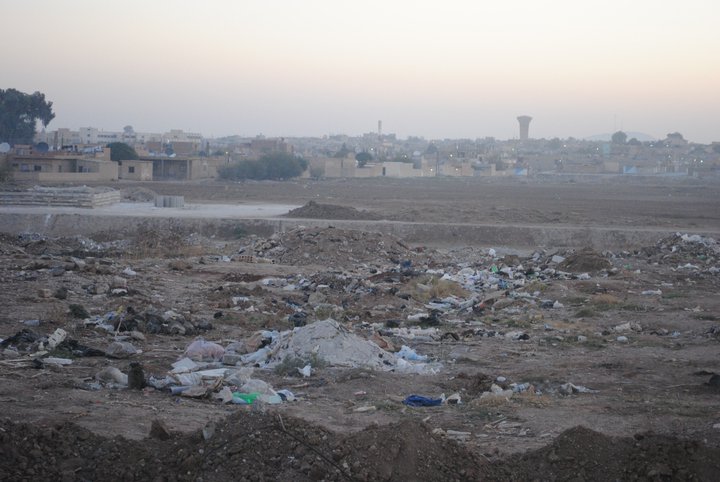 The conflict is never too far away

Our first taxi driver just happened to be a native of our first tourist destination: Lalish, a small town in the Iraqi countryside near Dohuk is also home to followers of the Yazidi faith. In keeping with some of the eccentric traditions of this faith, we had to take our shoes off before entering the town. Other traditions involve throwing coins into holes, rags onto walls and stones onto big blocks. The walls inside the Yazidi temple in Lalish are covered with beautiful fabrics which the people tie into a knot to make a wish. They seem to love foreigners and they welcomed us by providing us with platters of chicken and lamb with rice, all cooked and spiced to perfection.

We travelled straight to Sulaymaniyah the next day where we had our second piece of luck: a Kurdish taxi driver who’d lived in Bury near Manchester who took us around the Eastern part of Kurdistan and said if we didn’t have the money then we didn’t have to pay for the journey. He also spoke perfect English and translated everything for us when we visited the memorial museum in Halabja.

Halabja is one of the sites in Kurdistan that really imprints itself on the memory of those who visit it. On March 16th, 1988, over 5,000 people were killed and 10,000 injured by Saddam Hussein’s chemical attack on the city. There is a room in the museum where all of the bodies are set out as they were found, with visual aids in the form of pictures taken by journalists a few days after the attack. One of the strongest of these images is of a man clutching his two baby sons, lying face down in the street. After that you enter a room with the names of the 5,000 inscribed on a wall, which really gives you an idea of the magnitude of this tragedy. Later on that day we visited the cemetery containing the mass graves where the people of Halabja are buried. There is a notice at the entrance of the cemetery saying: “Ba’ath party members are not permitted to enter”.

After Halabja we visited Ahmadawa, the place where US tourists who had decided to go hiking near the waterfall attraction were recently taken by Iranians. Since this waterfall is only 2km away from the Iranian border, we decided not to take the same risk; at that moment it hit home just how close danger and conflict is in this part of the world.

One of the highlights of our trip was our final day in Iraq. We stayed the night in Sulav near Dohuk and woke up at 5am and hitchhiked to Amedi, which is around three kilometres away, to watch the sun rise over the mountains. When we walked around the town afterwards, it had come to life, and we were given free flat bread from the bakeries and chatted with the locals. This is just one example of the immense hospitality shown us by the Kurdish people.

Finally our time in Iraqi Kurdistan had come to an end. When we had all bought our Kurdish trousers, which incidentally are extremely comfortable, we headed towards the border with a few more souvenirs and a plethora of fond memories. When planning the trip, I had thought that Kurdistan would be a place someone would visit just to say that they’d been, a once in a lifetime experience never to be repeated. Perhaps we were just lucky with our encounters, but I would return in a heartbeat regardless.