This time last year, the very mention of the “Year Abroad” sent me into meltdown. Getting a job in this economic climate is difficult enough; getting a job when you don’t speak the language fluently and as yet have no degree or professional experience to speak of is practically impossible. However, twelve months and twenty-eight applications later, I am currently two months into an internship at Ykone.com, an online Parisian fashion magazine.

During my first week, Olivier and Mathieu, the co-founders of Ykone, took me out for lunch. What originally seemed like a welcoming gesture soon turned into the Spanish Inquisition over sushi. No sooner had we sat down than Olivier asked me whether I would be “requiring” a Parisian boyfriend for the next 6 months. If so, he needed to know my criteria so that he could start considering suitable candidates immediately. I replied, in a move which to this day I still regret, that I was definitely open to being swept off my feet by some dashing scooter-riding Parisian with an impeccable dress sense to boot. As a result, the past two months have also been a collective effort by Team Ykone to get Ellie, the poor English intern, a boyfriend.

First came the blog. Olivier came up with the idea of putting my photo on the Ykone website inviting potential suitors to apply. He first floated the idea at our second lunch date. By this point I had grasped neither his rapid French nor his sense of humour and therefore presumed that, much like the cheese-tasting trip to Versailles he had promised me on my first day, nothing would come of it.

Two hours later I found myself posing on a Vintage bike in the office courtyard, as Mathieu tried to get the perfect shot for the front page of my blind date blog. However, evidently I am not photogenic enough for the extremely glossy Team Ykone as the photos and the blog (thankfully) never emerged. I enquired once as to the photos’ whereabouts and Mathieu replied that they were being re-touched. Two months later it would seem that re-touching has yet to reach a satisfactory conclusion. Needless to say this was not the initiation I had been expecting.

A month into my time at Ykone and Fashion Week hit Paris. With New York being the first fashion capital to hold their show, followed by London and then Milan, Paris is the final of the “Big Four” fashion Capitals to hold the semi-annual event.

The Monday before the shows were due to start, Elise, the head journalist, presented me with a list of sixty press offices to telephone for tickets. “Don’t worry if you find it too stressful Ellie,” she added, “But if you get tickets, you can come too.” The prospect of telephoning notoriously unfriendly PR agencies IN FRENCH filled me with horror but there was, quite frankly, very little that I wouldn’t have done to attend Fashion Week. So I wrote myself a little script, took a deep breath, and dialled.

Elaborate invitations soon started appearing on my desk that I then dutifully passed onto Elise, waiting for the big phone call. Three days into Fashion Week and it still hadn’t come, despite Elise flitting from show to show. Whenever she returned to the office having fallen in love with yet another collection, I made sure to repeat over and over again, in my best French, “Wow Elise, what a once in a lifetime experience….”

A few days later and I was in luck. Elise had received invitations for two shows on Monday afternoon on opposite sides of Paris. She would take the Vanessa Bruno show and I would be dispatched to Zucca armed with a notebook and the most complicated camera that I have ever seen. 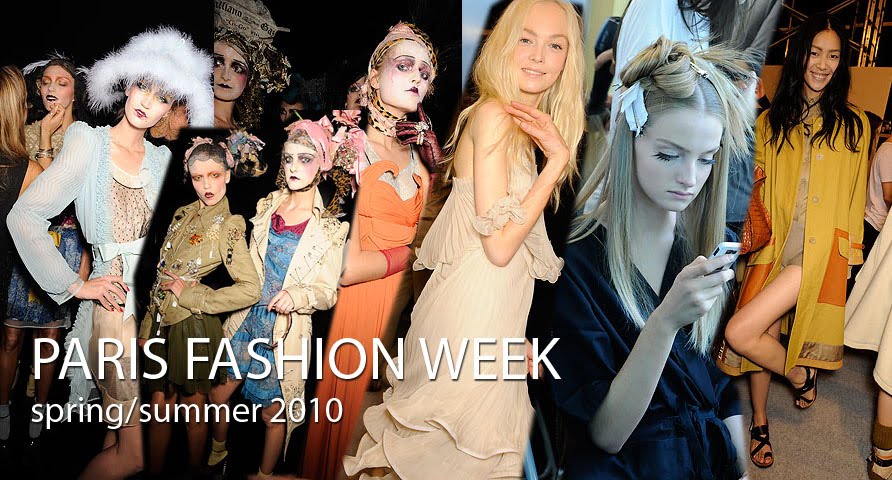 The show was to take place in the central courtyard of the Paris Medical School. Acutely aware of my appalling sense of direction, I gave myself plenty of time and got off the metro a block away from the Medical School with half an hour to spare. Basking in the sheer wonderfulness of the fact that I was not only about to attend my first ever fashion show but I was also going to report on it, I then set off in completely the wrong direction.

Five minutes before the show, I found myself running down the Boulevard Saint Germain in the pouring rain, thrusting my A to Z under anyone and everyone’s nose. Having made such a fuss about going to Fashion Week, returning to the office as a photograph-less, soggy mess was not an option. Two minutes after the show was due to start I burst into the Medical School looking as if I’d just completed a hard session at the gym. In contrast, the hoards of immaculately beautiful guests were calmly milling around chatting in their fur coats and unnecessary sunglasses. Luckily for me, the fashion industry doesn’t seem to know the meaning of the word “punctuality”.

The show itself was incredible. Somehow I ended up in the second row next to the journalist from Elle magazine who was a vision in a floral jumpsuit, huge geek-chic glasses and blood red lipstick. I struggle not to blur my holiday photos so needless to say that capturing the essence of models gliding up and down a dimly lit catwalk was a challenge. What’s more, on average, fashion shows tend to last only ten minutes which means that as a journalist you have to be constantly alert, alternating between frantically snapping away and noting down the key pieces of the collection. However by some miracle, I returned to the office, absolutely buzzing, with a selection of photos that Olivier judged “not bad at all”. My sigh of relief must have been audible.

Over the past two months I have, almost consistently, been pushed out of my comfort zone. Having said that, mad dashes in the rain aside, I am loving every minute of it. It may have been a logistical nightmare to organise, but thanks to my Year Abroad I am currently living the dream.