The Day the World Stopped without Wikipedia 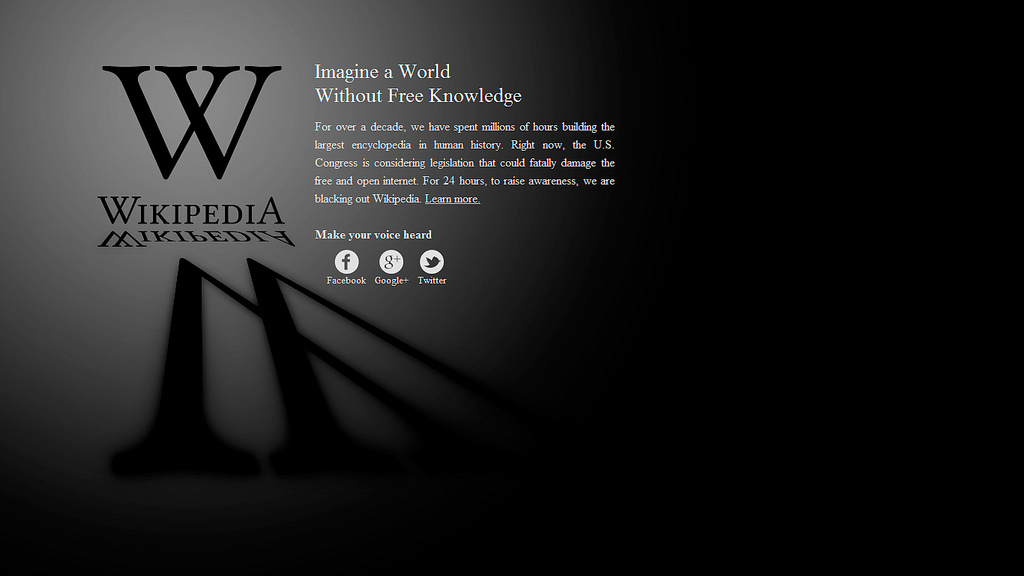 Wikipedia offered visitors to the site the chance to learn more about its protests.

There have been computer related scares in the past: the millennium bug, the week DUO turned yellow (was pretty scary until we realised it was for Marie Curie). However, nothing compares to the blackout of Wikipedia on Wednesday 18th January. The move comes in protest against proposed US anti-piracy laws. Proposed legislation includes the Stop Online Piracy Act (SOPA) and the Protect IP Act (PIPA), which are designed to combat issues including illegally copied films and TV content.

As it was unlikely the university would extend deadlines as a result of the Wikipedia blackout, it was no doubt a catastrophic event for many students. To add to the pain, procrastination took a significant hit with all sites on the Cheezeburger network going offline for the day. Reddit and BoingBoing went offline too. Google, Facebook and Twitter were also part of campaign but, luckily for us, waged it in a different way and stayed online.

SOPA is intended to make it harder for sharing sites that fuel piracy, such as The Pirate Bay, which operates overseas. The implication of the bill could mean website owners would have to go to large lengths to avoid being liable. As BoingBoing wrote, “Making one link would require checking millions (even tens of millions) of pages, just to be sure that we weren’t in some way impinging on the ability of five Hollywood studios, four multinational record labels, and six global publishers to maximize their profits.” The campaign backing the legislation is led by the Motion Picture Association of America (MPAA), whose members include Disney, Universal, Warner Bros., Sony and 21st Century Fox. MPAA also opposed the arrival of the videocassette recorder and VCR technology in the late 1970s and early 1980s but more recently they are responsible for the “You wouldn’t steal a car” piracy adverts before movies. They are normally busy administrating the ratings system in the US.

A Wikipedia statement the day before the blackout read, “Provisions for emergency access to the site should be included”, unfortunately a looming deadline for seminar work did not count towards granting such emergency access. It also stated that it would only be the English site that would go offline. I don’t speak French but plotted to utilise Google Translate; on the day I was overwhelmed by the loss of Wikipedia and forgot about my plan. Even though the blackout was easy to get round, the black page, which read “Imagine a World Without Free Knowledge,” on Wikipedia’s English site was viewed 162 million times with 8 million following instructions to contact politicians. Many more posted on social media sites, including Facebook founder, Mark Zuckerberg, making his first tweet in almost three years.

White House officials had said before the blackout that the Obama administration would not back legislation to combat online piracy if it encourages censorship, undermines cyber security or disrupts the structure of the Internet. Following the protests, eight US lawmakers withdrew their support from the campaign. One prominent Republican backer of the new laws, Senator Marco Rubio, announced on Twitter “After hearing from people with legit concerns, have withdrawn support for #Pipa. Let’s take time to do it right.” While Silicon Valley has won this battle, Hollywood will be back, but with toned-down proposals.

I knew very well there were other ways of obtaining information; Durham University Library was an obvious choice. A tweet from North Yorkshire County Council (yes, I follow the best) reminded me I could access their online library resources, including free access to the Encyclopedia Britannia, but this seemed too much like actual work and not enough like cheating. In the end I decided to take the day off to fully appreciate the fact that Facebook did not take similar action.