Society of the Week: Aerial Arts 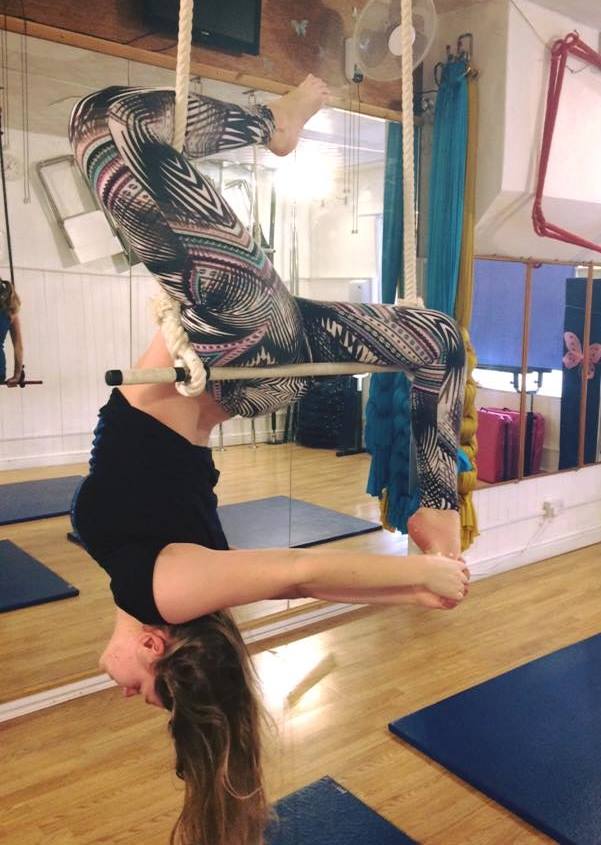 Could Aerial Arts be for you?

Pole dancing. Most people associate it with sleazy performances and minimal clothing, not the extremely technical sport that it should be recognised as. This stigma is often off-putting for people who might want to try it out, so what opportunities are there for those of you who want explore something similar? I interviewed Ruth McTiernan, President of Durham University Aerial Arts Society, to find out a little bit about why you should get involved.

What exactly is Aerial Arts Society?

Aerial Arts is quite a little known form of exercise – it’s fun, it’s good for keeping in shape and also for training and flexibility, or if you fancy running away to join the circus someday. We do Silks, Aerial Hoop, Trapeze and Squaerial- which is similar to the hoop but square. I think a lot of people aren’t really sure what each one is. If you’ve ever been to the circus and seen performers hanging from fabric (or occasionally rope), then that’s probably Silks. Hoop is literally a suspended metal hoop which is wrapped in fabric and Trapeze is fairly obvious- just a bar suspended from the ceiling by ropes.

Are some more difficult than others?

Yes and no. All of the different types have different challenges of their own; I imagine the most difficult to start with would be Squaerial simply because it can be quite painful to start off with. Most people find Silks easier to start with, particularly if they’re already quite strong because it takes a lot of arm work; I found Silks a lot harder at first because my arms are weaker. There are different challenges for tall and short people: tall people sometimes find it easier to get on to the equipment (except for Silks) and it’s sometimes more difficult to manoeuvre your limbs through the hoop if you’re taller, but you shouldn’t have a problem regardless of your height.

How did you get involved in aerial arts?

I got involved back in my first year when I saw the stall at the DSU fair and thought, “Oo that looks fun!”. We’re quite closely twinned with Pole Dance Society, but some of the people who do Aerial come from Pole, and some people cross over the other way. People who are a bit embarrassed to do pole dancing because there’s a bit of a stigma attached to it will often do aerial instead; I started off as one of those people but now I just don’t have the money to do pole as well!

Do you have to have a certain level of strength or fitness to get involved?

Pretty much anyone can do it from the start. I mean it helps initially if you have some physical strength, but I didn’t and it doesn’t really matter because you learn the technique instead and you get stronger as you go. The improvement depends on how much you do it really, like any sport, but it’s great fun and you don’t really realise you’re doing exercise. We also do some doubles and occasionally group work. Doubles work is interesting- it’s usually after a few lessons because it requires a bit more coordination with other people than individual moves.

We have classes of mixed ability at the moment – we used to have classes of newcomers and more experienced people, but at the moment we’re mostly newcomers so we’ve got a few people mixed in who have been there for a while. We have two classes a week and people mostly go weekly so we have two groups. We have two teachers-Rachel and Gillian, they take one class each week. It’s done in Gilesgate in the Tempest Dance Studio which I think puts some people off, but it’s not that far into Gilesgate and it’s definitely worth the walk. At the moment I think we have something like 16 members so we have plenty of spaces in the classes. It means if you come for a taster session you get pretty much top tuition in a small group- you can’t get better than that.

Is it mostly women who take part in the sport?

We’ve got mostly females at the moment but there are usually a couple of guys- our current secretary is a guy and he does it well. I think guys are a bit embarrassed to do it because they probably connect it with pole dancing and think ‘Oh, I can’t be seen doing that’, but I’ve had a couple of my male friends try it and they’re annoyingly good because they usually start off slightly physically stronger than some of the ladies.

Is it just classes or do you do showcases too?

We’re going to do a showcase on the 13th March with the Pole Dance Society and that’ll be in the DSU and we might also be performing at St Mary’s ball this year. For our performances we’ll learn a routine and in the showcase we’ll probably have a couple of different pieces of equipment that everyone will use. Most people have a preference out of the four types of equipment, but I’ve been there long enough that I don’t really have a preference. A lot of people like the Silks because you get to tangle up in them- it’s great when you have Silks hammocks because you can flip over and cocoon yourself. It’s a great deal of fun because you can start off at any level and immediately be able to do things.

Any advice you want to give to people who might be thinking of trying it out?

Give it a go. You don’t need any experience and you don’t need to be particularly physically fit- the only reason people might avoid aerial arts is if they have wrist injuries or back injuries. It’s great fun and we have taster sessions; you can come along to literally any of our classes for £5 without having membership of our society and have a go at a full lesson. That’s how most people start off- they come along and try it out an either go ‘Yes!’ or ‘I’m fleeing now!’. Don’t worry about heights either- the equipment is about a metre off the ground at most so heights are not an issue.

If Aerial Arts Society takes your fancy you can find out more information on the DUAAS web and Facebook pages.