Should the Lindisfarne Gospels stay in Durham? 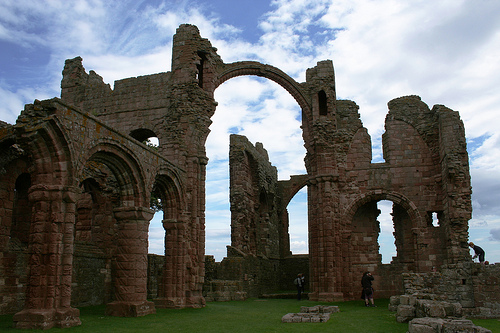 Lindisfarne Priory: the birthplace of the Gospels

Dr. Claire Breay, Head of Medieval Manuscripts at the British Library, explains the value of the Gospels and in doing so exposes another important truth: her organisation is determined to keep hold of it.

However, the role of the national library of the UK as the best place to house this great book has been repeatedly challenged by prominent voices both in the North East and beyond. The remarkable of the recent exhibition at Palace Green has only served to intensify the debate.

Durham City MP, Roberta Blackman-Woods, has campaigned for years for the manuscript to be moved from London.

“We want people to travel to the North East to see these wonderful Gospels in the context in which they were written.”

The idea that the book can only be understood as a product of the unique culture of early medieval Northumbria is an argument frequently used by proponents of its return.

The illustrations in the manuscript demonstrate the fusion of native Anglo-Saxon and Celtic styles with influences from the Continent that occurred in seventh and eighth century Northumbria.

The sacred power of the Gospels is deeply embedded in the folklore of the region. The manuscript is said to have emerged from the sea unscathed after being dropped overboard by monks fleeing the Vikings in 875 AD, an event attributed to divine provenance.

The British Library explained that while they recognised the “importance of the Lindisfarne Gospels” to the North East, conservation requirements mean that it is better to keep it in London.

“The Lindisfarne Gospels require an exceptional degree of care and expertise to preserve it and make it accessible for future generations.

“The British Library has been purpose built to safely store manuscripts of such significance and fragility. It also has one of the most experienced curatorial and conservation teams in the world.”

Chris Kilkenny, the historian of the Northumbrian Association who has been campaigning for the return of the Gospels for 14 years, told the BBC that the book can be stored safely outside of the British Library.

“I don’t believe in this idea that everything has to be in London. I think we’re more than capable of looking after it and displaying it.

Durham University are reluctant to endorse the permanent return of the Gospels to the North East, not least because relations with the British Library have been strained in the past by the campaign to keep the manuscript in the region.

“We are delighted to have worked in partnership with the British Library, so that the Lindisfarne Gospels could be loaned to Durham for three months in 2013.

“The exhibition and regional events programme has been a marvellous success, Durham has been lifted and the whole region has been inspired.

“The Lindisfarne Gospels are part of the national collection and we recognise that the British Library is the right home for this.”

Vice Chancellor Chris Higgins was even more adamant that the illuminated manuscript should stay in London.

“Why should it be in the North East permanently? It’s a national treasure not a North East treasure,” he said.

To a large extent, the debate hinges around a concept of identity; while some people assert the relevance of the Gospels to the character of Northumberland as a region, it could equally be claimed that it was a milestone in the development of ‘Englishness’.

What is clear though is the importance of the manuscript to the study of Anglo-Saxon England, as Professor Richard Gameson explains:

“The Lindisfarne Gospels is one of the best preserved works of Anglo-Saxon art that has come down to us.

“Because it is so well preserved and we can relate it to a specific context it is a lens that lets us see the world that produced it”.

The importance of the book to academics and students studying the Anglo-Saxon period has been emphasised by those who think it should be kept in London, where it can reach a wider audience.

“Combining Irish and Roman Christian traditions, as well as secular and sacred ornamentation, the Lindisfarne Gospels were intended to appeal to a diverse and multi-cultural audience.

“With this in mind, it is fitting that they are held in the British Library where they can be seen by visitors from across the globe and where they can be conserved as carefully as possible as part of the nation’s heritage.”

Chris Kilkenny disagrees. “They used to say scholars can only come to London to see these things but, after all, we invented the railways so they can get up to Durham quite easily and we invented the electric light so they can see the things when they get up here.”

However, the British Library was keen to add that there will be more opportunities in the future for the Gospels to be seen in Durham.

“Following a recent agreement, the Gospels can now visit the North East every seven years so each generation can continue to have opportunities to see them in the region where they were created.”

Visitors can find out more about the making of the Lindisfarne Gospels in a new exhibition, ‘One Amazing Book’, which opens in the Wolfson Gallery at Palace Green Library on Saturday 26th October.