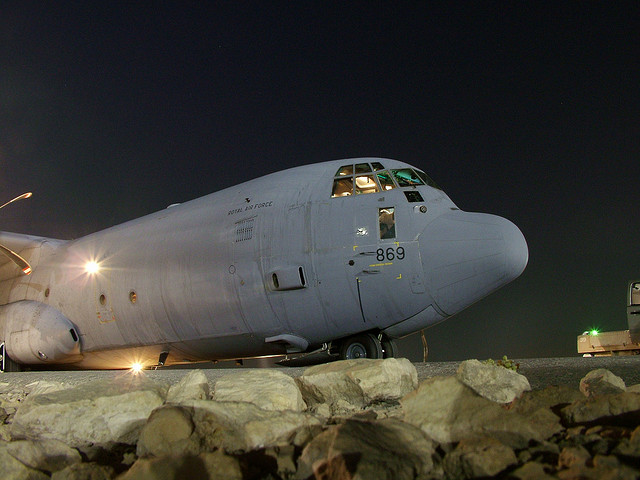 RAF Hercules aircraft, as used in the evacuation

Three Hercules planes carrying 150 people last night landed in Malta in efforts to evacuate foreign nationals from an increasingly volatile Libya. These are the latest rescues in a weekend which saw two further planes and a Royal Navy ship leave Libya with an estimated 350 civilians on board.

One of the three planes that departed on Sunday came under fire from small-arms, highlighting the danger that the rescuers are putting themselves in. The RAF were last night praised for their bravery by David Cameron who is said to be “delighted” with the recent rescues, and also by rescued oil worker Mike O’Donoghue who told the BBC “We owe them perhaps our lives… they were certainly risking theirs”.

Around 150 Britons were among those rescued over the course of the weekend. The Foreign office now believes that the majority of Britons who want to leave are out of Libya, but it admits that it is difficult to keep track of everyone and all Brits are being urged to contact them to inform them of their whereabouts. However, questions have been raised as to what is being done to help the remaining Britons. Alan Young, a British Oil worker said that the Foreign Office had given him very little help, and the British Embassy has now temporarily closed, with the Turkish Embassy representing Britons for the time being.

The weekend saw Libya slide further into “a kind of uneasy and very volatile repartition”, with the city of Zawiya, which is 30 miles west of the capital, being seized by Anti-Gaddafi forces late yesterday afternoon. Red Crescent have called the situation in the conflicted country “a humanitarian crisis”. Ten thousand are estimated to have crossed the Tunisian border on Saturday alone.

Meanwhile on Saturday in Tunisia itself, after further protests in the country which sparked the Middle Eastern revolt, the Prime Minister Mohammed Ghannouchi resigned, stating that his resignation would serve the revolution and future of the country. Despite this seemingly positive progress, the situation in the Middle East looks set to get worse, with reports yesterday from Oman stating that two have been killed as anti-government protests begin there.

It seems the Middle East is in this for the long haul. What remains to be seen, amidst calls for him to leave, is if Gaddafi is too.

For more on this topic see…