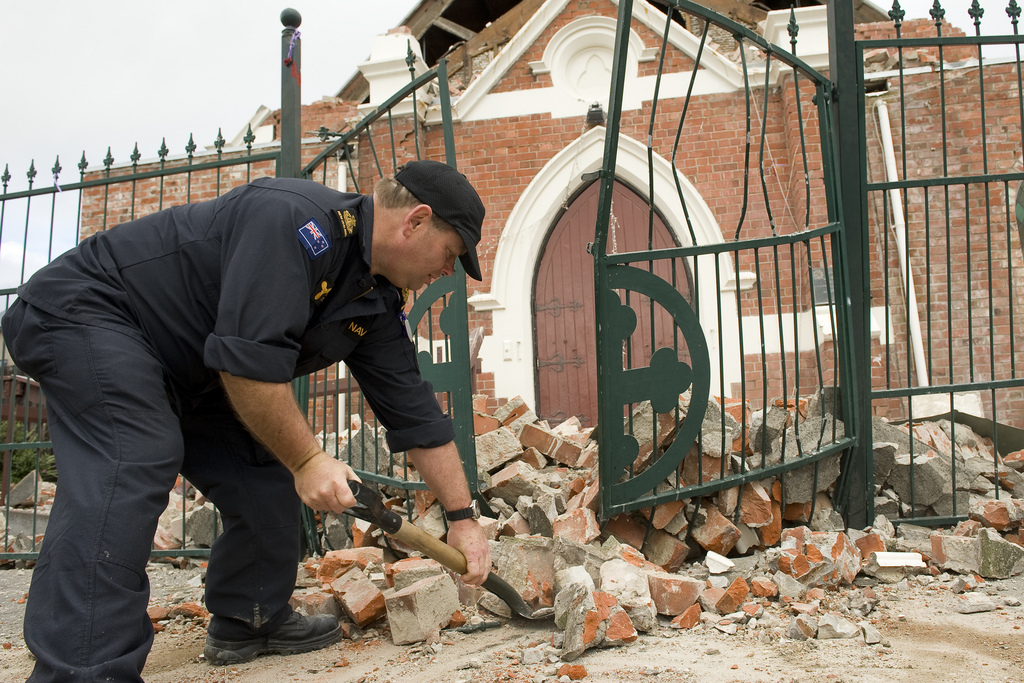 Navy Reservists begin the clean up

At least 65 people have been killed and many others reported missing following an earthquake yesterday in New Zealand’s second city, Christchurch. Aftershocks are still being felt in the region of Canterbury with the death toll predicted to rise above 200. Authorities are waiting for more precise figures from rescue workers.

Many people have been caught in the debris of fallen buildings and trapped inside vehicles. The coastal town of Lyttleton, directly above the epicentre, was said to have “collapsed like a pack of cards”. Several hotels have been destroyed and people are reported to have been inside the toppled tower of ChristChurch Cathedral when the quake hit. The hospital, though evacuated, has since reopened in order to treat survivors of the wreckage. Many structures were already weakened after September’s tremor of magnitude 7.1.

The tremor, measuring at a magnitude of 6.3, followed in the aftermath of 4th September quake, whose magnitude was stronger but resulted in no fatalities. It struck at 12.51 pm on Monday (23:51 GMT), with dozens of aftershocks continuing at irregular intervals. The quake is second in severity only to one that struck the North Island in 1931, killing 256.

Evacuation centres have been established though chaos still reigns due to road and tunnel closures, lack of water and electricity in a third of the city and only limited flights in and out of the airport. Civil Defence director John Hamilton said that information about trapped people and potential survivors was “patchy”.

Prime Minister John Key has reported scenes of “utter devastation”, foreboding New Zealand’s “darkest day”. He continued, “It’s just a scene of utter devastation, it’s just so vastly different from the last earthquake where, yes, there were some horrifying scenes but this is central city at a very, very busy time where you’ve had a massive earthquake.” Labour party chief and leader of the opposition Phil Goff declared: “This is a time for all of New Zealand to get behind Christchurch”.

A 73-strong search and rescue team from New South Wales has joined forces with New Zealand police officers and emergency services, working throughout the night to rescue survivors. 54 Urban Search and Rescue staff, 20 St John staff and hundreds more police and army units are on their way to support to the recovery operations. The US and Japan have also offered their support.