Mining in the “Paris of the Americas”

As the last Chilean miners emerged from their ten week ordeal, President Sebastian Piñera promised that he would improve working conditions for miners, and that Chile would finally adhere to international health and safety standards. For Piñera and his Minister for Mining Laurence Golborne, this should effectively secure their unprecedented increase in popularity ratings. Golborne was virtually unknown to the Chilean people at the beginning of August; now he enjoys an 86% approval rating.

Whether Piñera and Golborne’s pledge will be carried out remains to be seen, but one thing that is certain is that improving miners’ working conditions elsewhere in South America, particularly in neighbouring Bolivia, is likely to take much longer. In July 2009 I visited the mining town of Potosí in southern Bolivia, less than 300 kilometres from the Chilean border. Potosí was founded in 1546 after the discovery of silver in the surrounding mountains. It grew rapidly to become the largest and richest settlement in the Americas and came to be known by contemporaries as the “Paris of the Americas”. 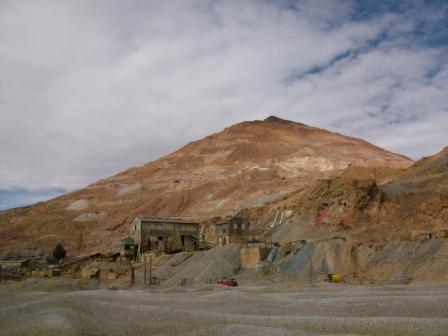 The mine at Potosí – “Paris of the Americas”

Huge investments, vast numbers of indigenous workers and Spanish colonial overseers all poured into the town. The first national mint in the Americas was founded here simply to regulate the exportation of silver. Sixteenth-century colonial buildings ostentatiously dominate the town centre. They form a striking contrast to the basic concrete dwellings which now lead out to the mine’s entrances on the outskirts of town. Today, Potosí boasts only a spattering of “chicken ’n’ chips” establishments as restaurants and absolutely no nightlife due to plunging night-time temperatures combined with an absence of heated buildings. It is truly bizarre that this was once the “Paris of the Americas”.

The silver has long since depleted, and it is the much less profitable tin industry that largely supports this mining town. Tourism currently supports only a few lucky ones, whilst those less fortunate continue to descend the mining tunnels, following the faint “threads” in the walls and ceilings to reach the ever diminishing tin deposits. Every head-miner works on an independent basis, effectively selling their findings to tin traders on the outskirts of the town, and paying his assistants out of this money. What a mining team finds is often a matter of luck, and this luck is what is relied upon to support families.

I entered one of the mines as one of a typical tourist party. Stooping below four feet simply to walk, paddling through ankle deep water, jumping over shafts, and clinging to disconcertingly wobbly wooden ladders to move from one level to another, it was needless to say an unpleasant experience. My mind and body were both tested by the constant concentration required to negotiate the mine’s obstacles, as well as adjusting from a bearable daytime temperature outside, to the icy cold temperature inside the mine itself. Whilst your average Westerner would not even consider entering the mines at all never mind working there, for southern Bolivians, mining in Potosí is one of the highest paid job opportunities in the area. 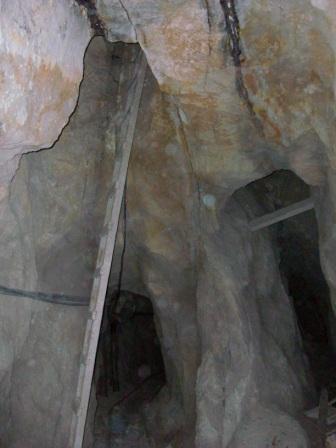 Health and Safety is clearly not a priority in the mines.

Our tour guide, Marco, explained that the miners generally work six hour shifts around-the-clock without breaks. The labour intensity and poor air quality make any longer shifts impossible. The miners sustain themselves on coca leaves: a drug ingrained in South American culture which is much like a strong appetite suppressant, and also happens to be the mother of cocaine.

Superstition also plagues this town. Alpaca blood surrounds the entrance to prevent fatalities, and the red mining god Tío allegedly watches over the miners as they undertake their dangerous work. To ensure Tío’s contentment, his relic is surrounded by a sea of offerings consisting of coca leaves, cigarettes and empty alcohol bottles. “Tío is a thirsty man,” Marco explained with a smile. In this particular mine, out of a workforce of around sixty there was an average of one death each year, generally caused by falls down shafts. The shafts have no barriers or warnings, so I quickly learned that these deaths would have been easily preventable. 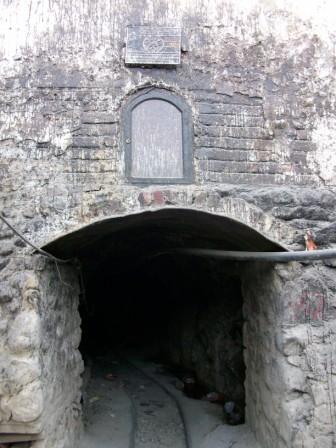 Alpaca blood is smeared over the entrance to prevent accidents

Even if a miner dodges the open shafts successfully, most workers must retire after 15–20 years and claim a meagre government allowance. Crippling lung disease from the fine particles released upon drilling prevents them from working any longer and usually contributes to a premature death. Professional protective masks are already provided, but only for some. The “head miners” who direct the drilling in a sub-team of roughly ten men are lucky; their nine apprentices are not so fortunate, despite being exposed to the very same harmful particles. Every miner has to start as an apprentice, so every miner suffers years of exposure, and yet the cost of purchasing the extra masks is negligible by Western standards. Temporary miners contracted during busy periods, usually students returning from Bolivia’s capital La Paz for vacations, also suffer from the corrosive mining dust damaging their lungs.

As the world’s attention focuses on the Chilean miners, we must not forget the horrific conditions that continue to exist in mines across the whole of South America. Chile, as the most prosperous South American country, has far superior working conditions compared to its neighbouring countries. Bolivia, as the poorest, has some of the worst conditions and yet these could be improved dramatically and inexpensively.

One of the reasons for the lack of awareness about the issue is that national media headlines have been preoccupied with the civil unrest socialism has caused under Evo Morales. Additionally, 60% of Bolivians live below the poverty line, whereas the miners earn a comparatively good wage, at least there is no financial incentive to protest against working conditions. The combination of these factors has lead to a general absence of interest in miners’ working conditions. Today, with international focus upon the Chilean mining industry, perhaps the world could direct its attention just 300 kilometres east to Potosí, and apply some pressure for change here too.