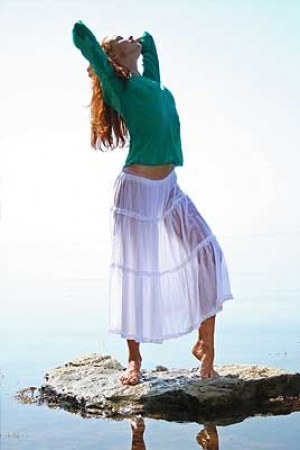 Is the fashion industry to blame for potentially damaging ‘beauty’ ideals?

The fashion industry has often been berated for its influence on the public and what may be perceived as a ‘beautiful body.’ From the size-zero debate (covered previously by The Bubble), to the use of models from other ethnic backgrounds; the big style houses have much to answer for in their pursuit of the latest vogue. However, while a particular ‘skinny’ trend has its potential origins in the modelling industry; it certainly owes its popularity and power to social media. I speak of the most recent target of the female body judgement to hit the mainstream media: ‘the thigh gap.’

For one to be deemed in possession thigh gap, it must be possible for you to stand feet together and be able to see a noticeable gap between your legs in the upper thigh. Often lauded as a mark of particular physical perfection in models on the catwalk, it has since become increasingly prevalent in mainstream media and society. What is worrying about this trend is the extent to which it is perpetuated by social media. Proponents give out ‘advice’ on how best to achieve this level of what is seen to be physical perfection and micro-blogging websites, while a social platform for important political and social interaction, have also allowed for blogs solely dedicated to aspects of the (predominantly) female body to be scrutinized to the highest detail. It is now possible to scroll through hundreds of images of girls and women, proudly sporting a ‘thigh gap,’ some with the accompanying slogan, “the thigh gap you’ve always wanted.”

The actually physical ability for many women to achieve a thigh-gap has also been questioned. Even sites purporting to detail how to gain a thigh gap also acknowledge that; “it is not physically possible for most people.” Highlighting the potential health risks to particularly younger women, if they attempt to reduce their weight to such an extent that a gap would appear. Some blogs have also responded satirically with advice about how the skeletal structure is unlikely to change through diet. Although the fashion industry has started to adopt a greater range of models with some designers slowly reacting to the change under intense media examination, it appears that it is happening too slow to combat the emergence of body dysmorphia connected to or inspired by, models.

It was Robyn Lawley’s treatment at the hands of people on social media who publically berated for being “too large,” because the gap between her thighs was not judged a suitable distance for someone modelling lingerie that has drawn much attention to the trend. After being the subject of online abuse Lawley wrote a reactionary article addressing the issue, she notes that from a young age that she was “was unfortunately inundated with images of women and girls who had pronounced space between their thighs.” citing her own response to the Facebook post and social media commenter’s, “You sit behind a computer screen objectifying my body, judging it and insulting it, without even knowing it.” Lawley presents something of a defence of fashion, highlighting that, despite not fitting into the stereotypical ideal, that she has still become one of the most successful ‘plus-size’ models in the world.

Despite the public outcry from models such as Lawley the trend has still taken hold. If you were so inclined you may even ‘follow’ the scintillating account of model Cara Delevingne’s thigh gap on twitter. The dimorphic trend has also been seen to carry through to manufactures with the company co-founder of Lululemon, Chip Wilson, explaining in interview that the ‘yoga pants’ produced by his brand were suitable for women whose thighs did not cause too much “pressure” on the material. The company also openly admitted that it did not stock sizes beyond a US 12–14 (UK 14–16). While there was a degree of media backlash, the dominance of the thinking behind Wilson’s comments still prevails.

Whether the fashion industry can be blamed for the trend remains something of a moot point. The Popularity of models as an aim for often unrealistic expectations of what is physically attainable stretches all the way back to the fame of Twiggy in the mid 60s. But some in the fashion world are making an attempt to combat the effects of the fashion industry towards potentially damaging trends. The organisation All Walks Beyond the Catwalk, explicitly campaign for greater diversity within the fashion houses, and that includes a representation of women who may not match the slim ‘ideal’ that is so associated with modelling. It is only by changing the faces in the media and advertising campaigns, showing a spectrum of people, that any transformation is likely to occur beyond the famous fashion weeks. In the mean time, much like the size-zero debate, we need to keep in mind that fashion should be about the clothes, not body perfection.

The full interview with Chip Wilson can be found here:http://www.bloomberg.com/video/lululemon-pants-don-t-work-for-some-women-founder-ATKjgs7jQduIr_ou1z8XYg.html