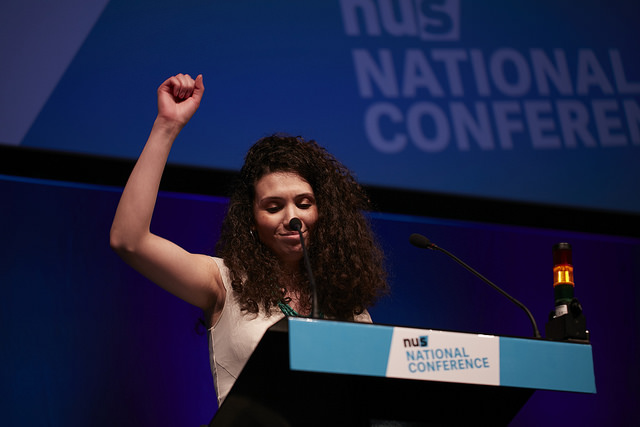 The signs had been there from the beginning, but when Malia Bouattia was yesterday elected National President of the NUS it was an upset whose ramifications have already been felt far beyond the Brighton Centre. She defeated the incumbent President for 2015/16, Megan Dunn, by 372 to 328 votes during a tumultuous ‘Day Two’ of the NUS National Conference.

The result, in stirring the attention of the national press, will dominate headlines. It’s clearly a considerable achievement for the former NUS Black Students’ Officer. She is the first black female Muslim President in the union’s 94 year history, and the speech that helped Bouattia claim her famous victory really brought home just far she’d come; she emotionally talked about her experience fleeing a civil war in Algeria when only seven years old. ‘Change won’t come from sitting in the corridors of power’, is perhaps the line from that speech that best encompasses the radical grassroots platform on which she stood. Expect an NUS in 2016/17 that is a far more visible and assertive force in their campaign against cuts made to higher and further education by the Conservative government.

Nevertheless, Bouattia’s newfound prominence in the main-stream media derives more from the serious allegations made against her, rather than the student’s successful campaign for the NUS presidency. It has already been widely reported that Bouattia described Birmingham University as ‘something of a Zionist outpost’ in 2011. Moreover, in calling the Israel-Palestine peace project a process ‘strengthening the colonial project’, Bouattia has been subject to intense scrutiny from Jewish groups in the last 24 hours. She might have tried to reassure Jewish students of her record in a statement yesterday – ‘When a motion was debated to mark Holocaust Memorial Day on conference floor this afternoon, I proudly voted for it’ – but, The Union of Jewish Students suggested that ‘there will still be many Jewish students who have not been satisfied with Malia’s response so far to the concerns raised’.

Perhaps the most damning indictment of Bouattia is the fact that CAGE, the Islamic advocacy organisation whose director called Mohamed Emwazi (‘Jihadi John’) ‘a beautiful young man’, congratulated her on her election in a tweet yesterday. Maajid Nawaz, a prominent activist writing for The Jewish Chronicle Online, has described Bouattia as ‘symbolic of the poison of the ‘regressive-left’, a group which he describes as ‘a non-progressive faction of the far-Left’ where ‘jihadist terrorism has come to resemble an authentic expression of Muslim rage at Western colonial hegemony’. Whatever you make of the media’s interpretation of Bouattia’s comments, she and the NUS need to work very hard if they want to dispel accusations of anti-Semitism.

In a result that won’t receive the same interest, though will undoubtedly prove more significant for some, the NUS yesterday passed Motion 605 to employ a full-time NUS Trans Officer. Despite complaints raised by one individual, the motion was approved by an overwhelming majority, the news of which brought about a sustained standing ovation on the conference floor after a similar motion controversially failed in 2015. The close and emotive nature of NUS Presidential election meant ‘Day Two’ of Conference was primarily one of division; however, this decision showed there is still great unity and power to be found in the National Union of Students.