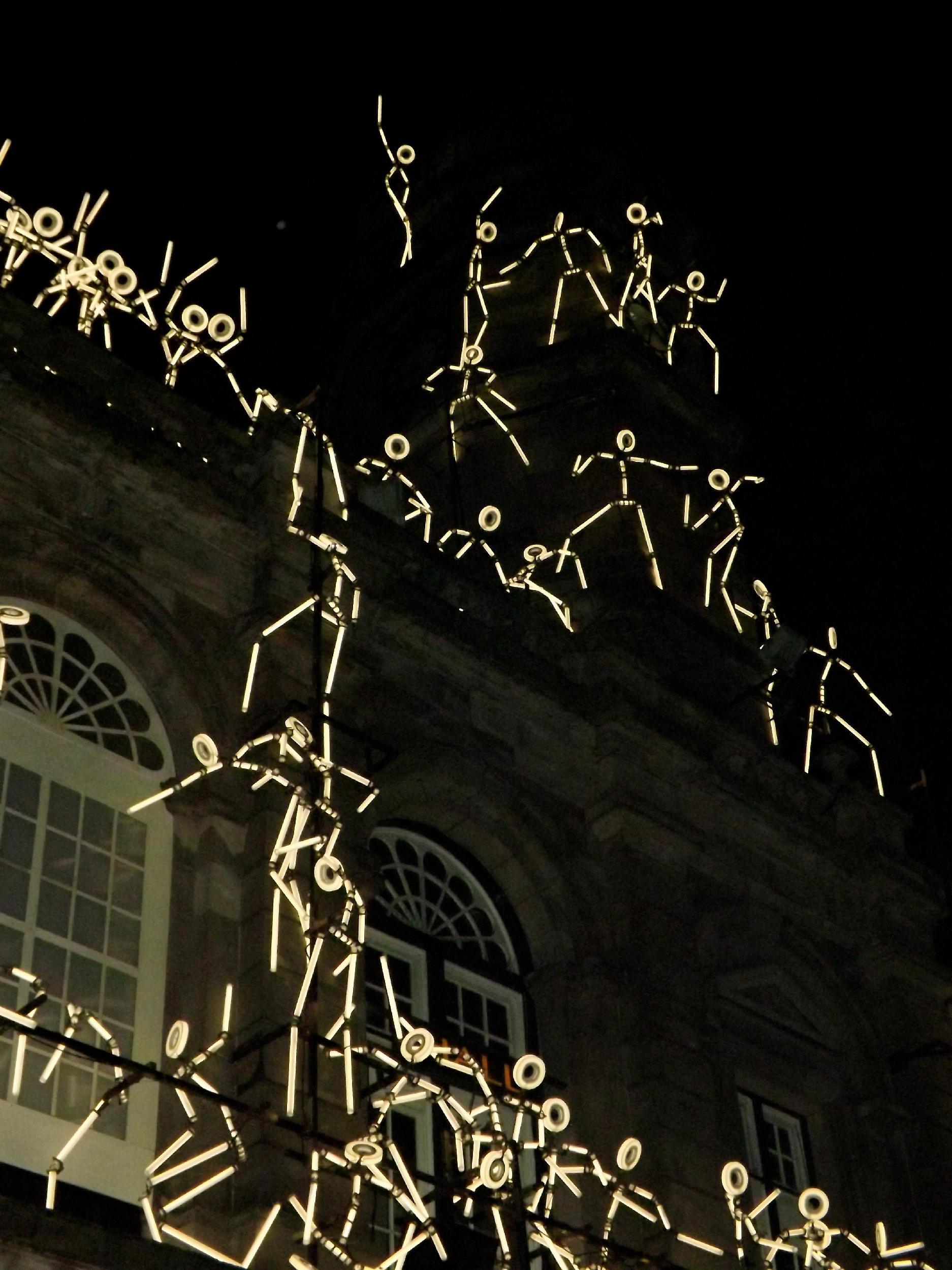 After studying the guide to Lumiere over my daily bowl of pomegranates, I came to the conclusion that it was simply a bi-annual opportunity for the crème de la crème of wacky artists to display their ‘artistic’ light creations, and the wackier the better from what I had seen. Clearly, however, this was not going to put me off exploring what was on display (not that you could really miss some of it, i.e. trumpeting 3D elephant on archway). After all, cultural events of this scale very rarely reach Durham and whilst I am certainly no culture vulture, my mother would have been angry at me for not making the most of every opportunity my academic adventure offered me.

I didn’t have to venture too far to find the first exhibit. Old Elvet played host to 4 electric cars which had been converted into ‘greenhouses’ full of “glowing artificial plant displays”. I had run past the cars one afternoon earlier in the week and was left contemplating how on earth anyone had driven them when the driver’s seats were covered in vegetation. My (uneducated) guess was that someone was preparing for one hell of a wedding and had got a bit over excited when ordering the flowers, but turns out I was wrong. Instead, this display was intended to make us “reconsider our reliance on cars” and the “catastrophic effect this has on the environment”. Actually quite a clever concept, although one could argue that in creating the artificial plants used in the cars, were they actually not contributing to the greenhouse effect? Quelle controverse! In all honesty, although I thought that the basic idea was a promising one, in reality I found it pretty bizarre and even a little morbid.

Moving on to a more positive note, I was a big fan of Ménestrier the elephant – or Terrence as we so affectionately named him – who invited us to begin our journey through the Urban Jungle otherwise known as Durham. Whilst this is not a term one would ever use to describe the town (unless it was meant as an insulting reference to its student inhabitants), the installation’s aim to explore the “strangeness of the presence of a wild animal in an architectural context” was certainly achieved; as much as most of us enjoyed Ménestrier, after hearing trumpeting and stomping noises echoing around the town all week I don’t think anyone will be thinking it’s a good idea to bring any actual wild animals to reside in Durham.

Continuing with the positives, and on a slightly less sarcastic note, Studio’s representation of the miners was very well done. On the front of the former Durham Miners’ Hall, we were presented with a “light-hearted commemoration of the building’s heritage”. The stick men (essentially large polos attached to a body) were both poignant and amusing, reminding us of the plight of the miners in the county and then entertaining us by ‘dancing’ along to some crazy disco tune (because their building is now a night club, clever eh?). The artists, Groupe LAPS, whose work uses light to tell a story in an urban environment, were very creative and I thoroughly enjoyed it, especially the dancing warden bopping along at the side.

In all three evenings we ventured out, we did not once make it beyond the centre (call it laziness if you will but getting to Studio was effort enough) and instead visited Palace Green three times, eventually making it into the cathedral on Saturday. We were very excited as we had high expectations after the vest-lanterns and burning carriages of two years ago, but alas our expectations were far from met, and the highlight was witnessing a group of wannabe crowd-pusher-inners be put in their place by an unamused warden: “What do you think all these people are standing here for?” You go Glen Coco! Fair enough, the dresses were quite pretty, and until I saw the wire coils I was very intrigued by the squiggles of light darting above me, but that was all. No fire and no spectacle when we left the cloisters left us unhappy, although a hot chocolate and cookie for £1 did somewhat ease the pain of disappointment.

All in all, I think my visiting best friend summed it up when she said that Lumiere had succumbed to austerity. Not sure Angela Merkel’s policies stretch to British light festivals but if they did they would make them like this. It’s not that it wasn’t enjoyable, it had its good points and admittedly I didn’t see everything, but it was lacking the wow factor many were expecting. Although I may (slightly) miss hearing elephant noises as I walk to class, I probably won’t miss the need to navigate obstacle courses to access the centre, nor the hordes of people and especially people with buggies. Buggy-free crowd events are the way forward; future organisers take note.