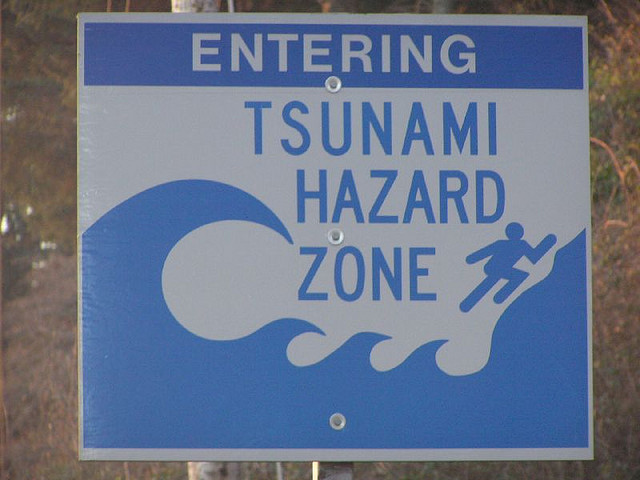 An 8.9 magnitude earthquake has caused a tsunami in the north-east of Japan this morning.

At around 14:46 local time (5:46 GMT), a rupture in the floor of the Pacific sea caused a 13 foot wave to ravage the north-east coast of Japan. Devastating images of a muddy, debris-strewn body of water can be seen in footage recorded by Japanese television. Cars, ships, even buildings – many of which are on fire – can be seen, swept up by the wave’s powerful force. Motorists are seen speeding along the roads in an attempt to escape the approaching wave.

Japanese footage also captured shocking images of a huge ocean whirlpool. Japan’s Kyodo news agency has confirmed that a ship carrying 100 people was swept away by the tsunami.

The wave spread to as far as 250 miles away from the capital of Tokyo. The city has experienced fierce aftershocks. Many buildings have collapsed, with hundreds of workers filling the streets, trying to find safety. 32 have been reported dead, with the death toll expected to rise significantly.

The earthquake has also sparked several serious fires, causing an oil refinery in Ichihara, as well as several nuclear plants, to be closed down. So far, no leakages have been reported but Japan has issued a state of emergency after the failure of a cooling system at Tohoku Electric Power Company’s Onagawa facility.

At present it is not known what caused the earthquake. A spokesperson for the Australian Tsunami Warning Centre has explained that it takes time for the earthquake signal to travel through the earth’s crust and it is therefore “very, very difficult to give useful warnings to anybody who is less than 30 minutes tsunami travel time away from the earthquake”.

Warnings have now been extended across the Pacific – Taiwan, the Philippines, Indonesia, Hawaii, Canada and the Pacific coast of Russia have all been urged to take precautions. Authorities have begun to evacuate coastal communities and the north-east coast of Indonesia expects to be hit at any moment.

Chief government spokesperson, Yukio Edano, has said: “Our initial assessment indicates that there has already been enormous damage.” He added that the Japanese government would strive for “maximum relief effort”. The Defence Ministry has already sent troops to areas that have been severely hit.

In Britain, the government has set up a helpline for anyone worried about friends or relatives in Japan. David Cameron has said: “The first thing we should be thinking about is sending our sympathy and our condolences.” “Everyone should be thinking of the country and its people and I have asked immediately that our Government look at what we can do to help.”

For more information go to: